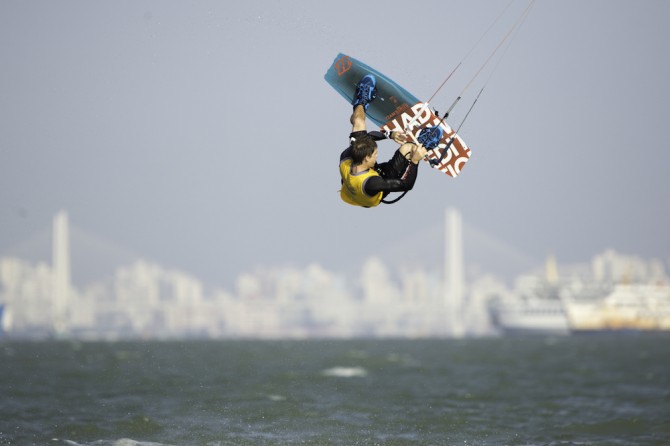 Aaron Hadlow is prequalified for the new tour along with the rest of the top 14 male riders. Photo: Toby Bromwich

The PKRA as we know it changed last year when long time organiser Mauricio Toscano sold the tour to a new group spearheaded by Virgin, another nod to Richard Branson’s growing interest in the sport. Since then it has been all quiet on the Western Front with very little information coming from the event and lots of the riders literally having no clue about what was happening. We’ve been asking and digging as much as we could but all in all the lid was firmly shut and everyone was very much in the dark, until now! 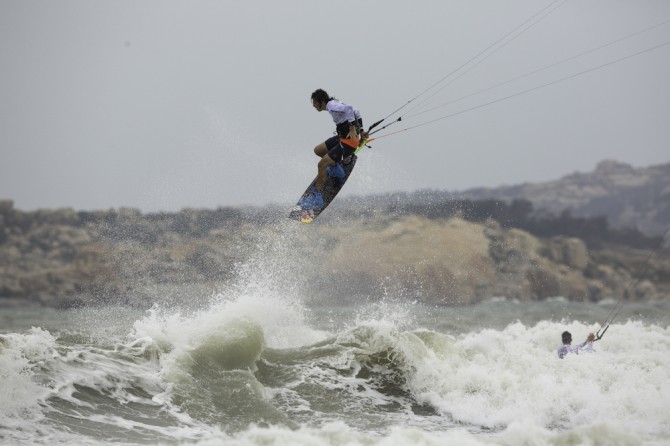 Christophe Tack will be back to defend his title… Photo: Toby Bromwich

The PKRA have just released the following press release about the 2015 World Tour, and there are some big changes. Gone is the Double Elimination that has been favoured for years which allowed riders knocked out of the event to have another crack at getting to the final. Big Air is in, although it is somewhat ambiguous as to when that will be happening and at what events. Waves and Slalom make the grade too and there is now an “Overall World Title” up for grabs which will recognise not just the best freestyler but the best all round kiter across all the disciplines. Perhaps the biggest omission that we could see is that racing in either Formula Kite or Foil disciplines isn’t going to be part of the tour at all. 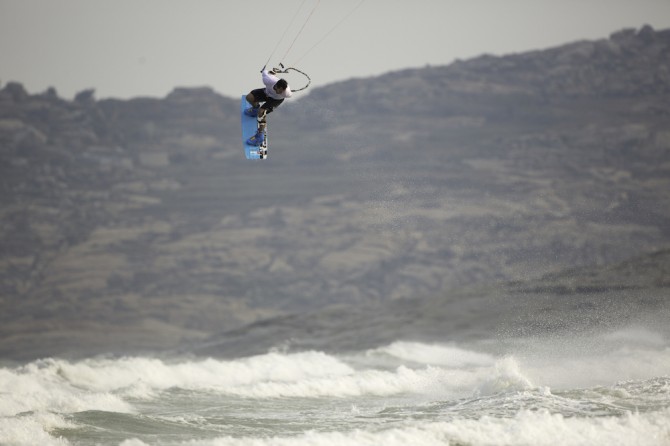 Youri Zoon going big, something all the riders will have to do as part of the Big Air event if they want to win the Overall World Title! Photo: Toby Bromwich

There are also lots of unconfirmed events and only 4 of the events out of a possible 12 actually have dates attached to them… It will also be a slimmed down field with just 24 men and 12 women able to compete in each event. Riders who want to compete will either have to rank in the top 14 for men or top 7 for women in the previous year or attend pre season and mid season qualifying events to be in with a chance to compete on the world stage. There are certainly some big changes, and with so much going on behind closed doors it is hard to see how this will eventually unfold. 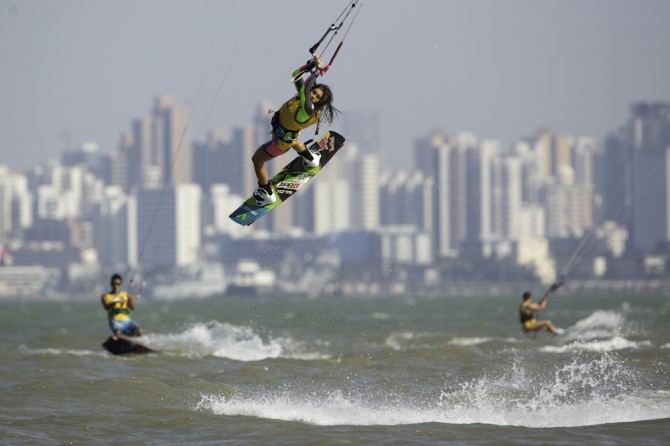 The ever competitive Gisela Pulido will no doubt be keen to push for another trophy! Photo: Toby Bromwich

Individual qualifiers will be held for the big air and wave events that are scheduled, the top 8 men and top 4 women from last years wave event will get a pre qualification in that discipline. At the moment there is no stipulation where the wave and big air events will happen, but with Cape Town getting a nod for an event in December (TBC) that looks like a likely location for big air and waves and with Fuerteventura and Dakhla on the cards those spots could also offer the wind and waves needed. It also looks like strapless freestyle and jumps will feature as part of the wave competition, this is a definite break from the norm of the wave events of the past and should suit riders like Matchu and Mitu who train really hard for those freestyle moves. 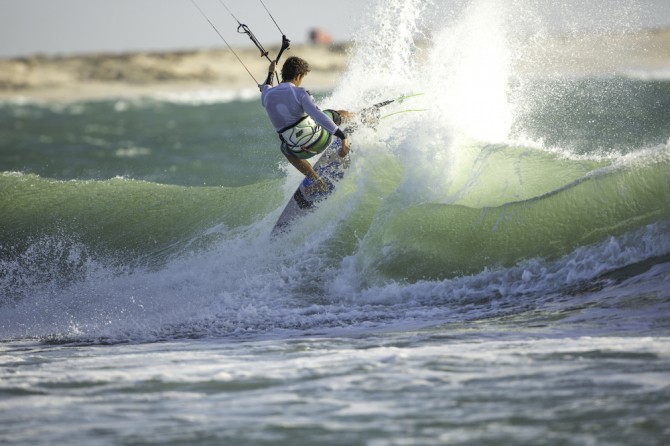 Keahi De Aboitiz is pre qualified for the tour as he won the only wave event of the season last year in Dakhla. Photo: Toby Bromwich 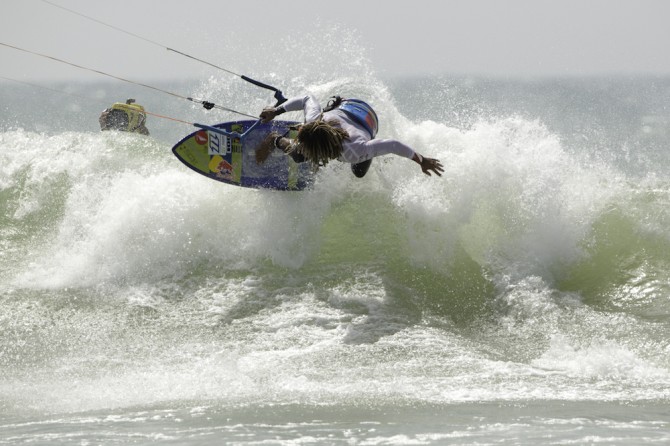 Matchu Lopes Almeida will no doubt be shredding, the new format allowing for strapless jumps and tricks should suit him… Photo: Toby Bromwich

There is no mention of sponsorship or a total prize fund as yet and with so many riders in the dark about what is happening the PKRA are going to need to come clean very quickly about what is planned if they want to pull this tour off and keep the riders happy. This time last year the first event had already been and gone so it’s very late in the day to be releasing the details, especially as so much of it seems unconfirmed.

One little nugget of information we are going to share, the images from the press release contain the acronym VKWC, we’re going to take a guess that will stand for the Virgin Kite World Championships… You heard it here first! 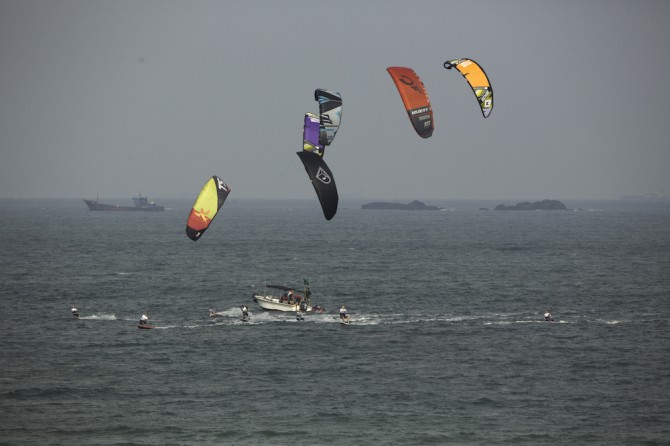 We are approaching our first 2015 tour stop and while we are working to publish the complete new tour rules, we want to give you a preview of the major changes in the 2015 rules. Also please find an overview about the current 2015 tour calendar below.

There will be one Qualifier stop (WQF) before the first stop for the coming year and another one halfway during the season. 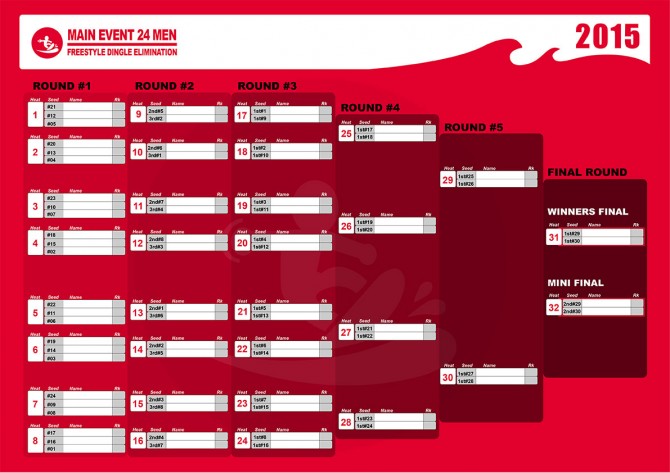 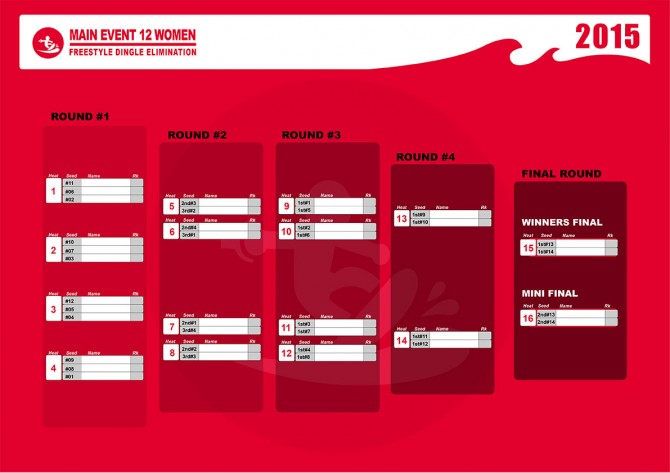 There will be local event organizer’s wildcards given at each event: 2 men and 1 woman.
A new Injury wildcard is already in place for the 2015 season. To be entitled to Injury wildcard, a competitor must be ranked in the Freestyle world rankings top 14 for men and top 7 for women at the time of their injury and have evidence that the competitor missed at least 50% of the current year events or combined two year events.

Freestyle Prize money distribution will be as follows: 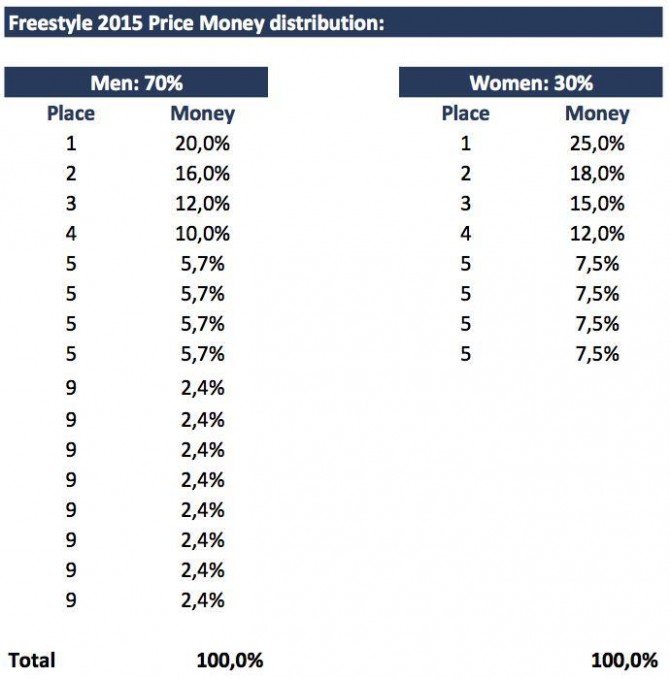 In order to improve the quality of the judging and to drive the media attention to a more predictable area, for 2015 we will introduce a reduced competition area and new interference rules and penalties to make sure only one competitor jumps at a time and to bring the action closer to the judges. In some scenarios with 3 competitors per heat we may use an offset mark to be rounded before any jump attempt inside the competition area. 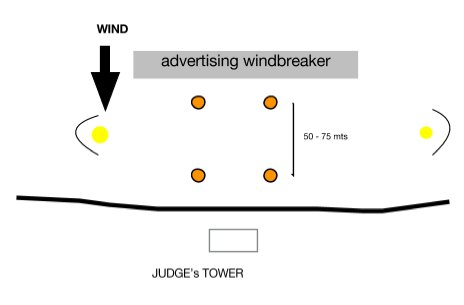 Interference may be called if:

A new Freestyle scoring system is introduced for the 2015 season following all the feedback from the various parties involved and the discussions with the media partners.

In summary, the new system is based on individual tricks (similar to the previous one), but breaks down the current and re-worked judging criteria into three main scoring criteria or categories, each one being judged by two or one judges. 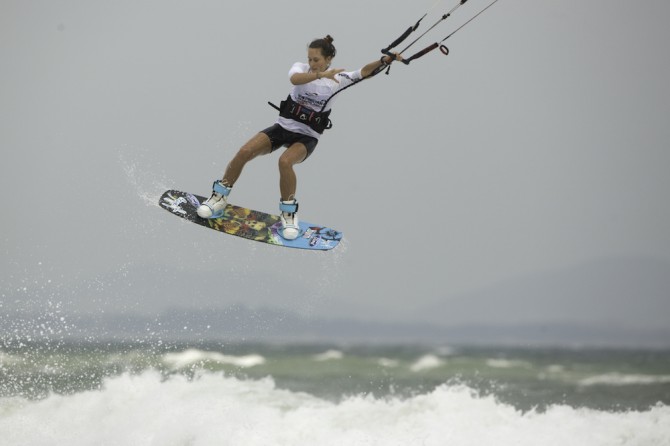 Karolina Winkowska will be keen to defend her World Title, will she be up for the Overall? Photo: Toby Bromwich

Technical Difficulty – The technical difficulty of a trick completed during the heat.

Power – The power during the execution of the tricks. Power will be considered as a combination of:

Height – Height of the trick completed during the heat. This aspect will exponentially come into consideration as the wind conditions increase, but only when the height is achieved along risk factor and technical difficulty.

Variety – The variety of tricks completed during the heat is considered in the maximum number of different tricks to be counted for the final score per trick category.

Risk factor – Is directly linked to the Power involved in the execution of the tricks, but also to the commitment of the competitor, technical and physical challenge during the execution, duration of the critical moment, amount and quality (lines direction) of the air in the trick, and energy on the execution.

Innovation – Tricks that have never been landed in competition before.

In Dakhla 2015 there will be a panel of 5 judges – each judge contributing 20% to the final score per trick: 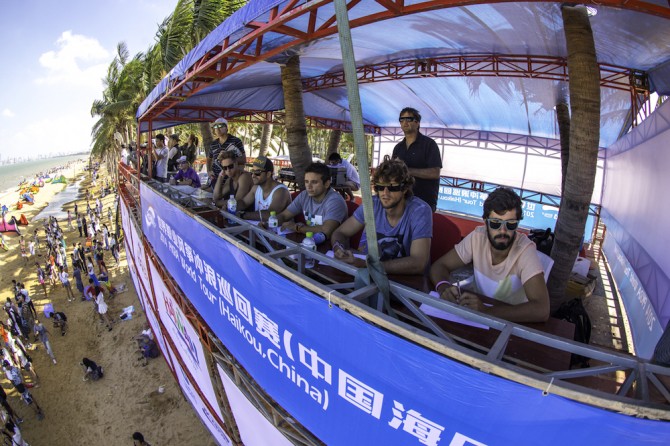 Once again the judges will have their work cut out for them, although with only one rider performing a trick at a time it should make it easier… Photo: Toby Bromwich

Crashes have been re-defined and clarified.

A crash will be considered when:

Judges may give credit to a landed trick that is not a crash when:

We will bring this new exciting discipline to our most windy venues for the 2015 season.

There will be Qualifiers at every Big Air event scheduled during the 2015 season. 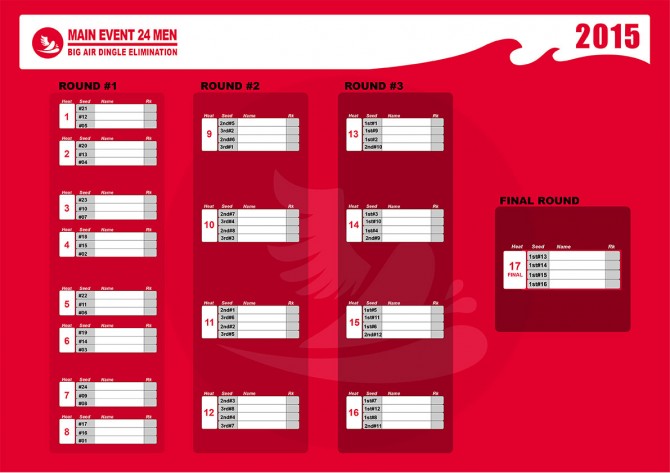 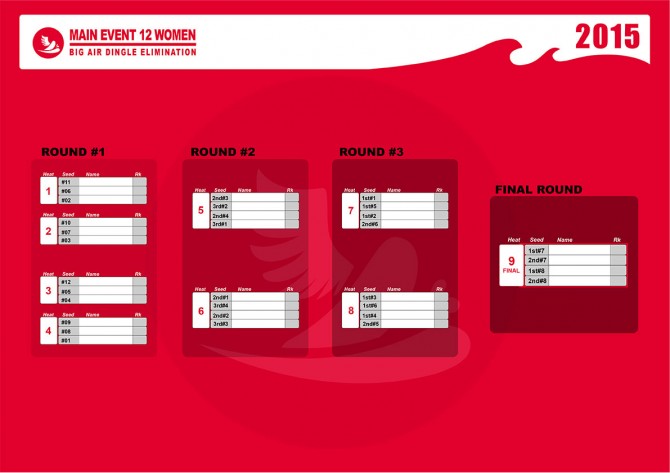 Big Air Prize Money distribution will be as follows: 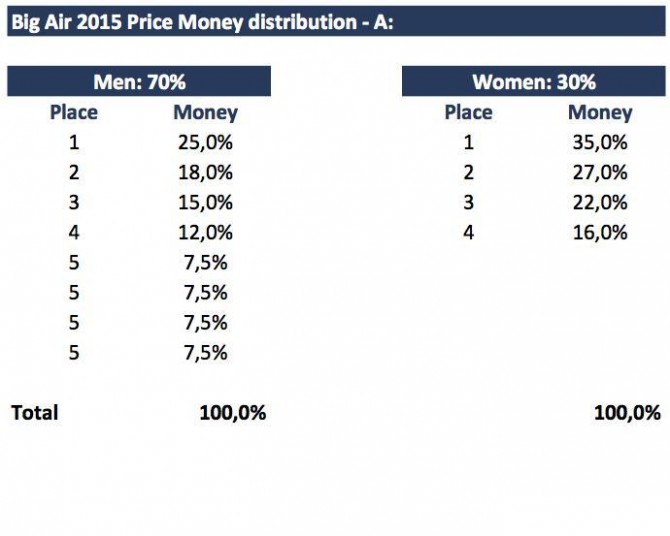 Risk Factor: Is directly linked to the amplitude and technical difficulty of the jump, but also to the commitment of the competitor, technical and physical challenge during the execution, duration of the critical moment, amount and quality (lines direction) of the air in the trick, and energy on the execution. 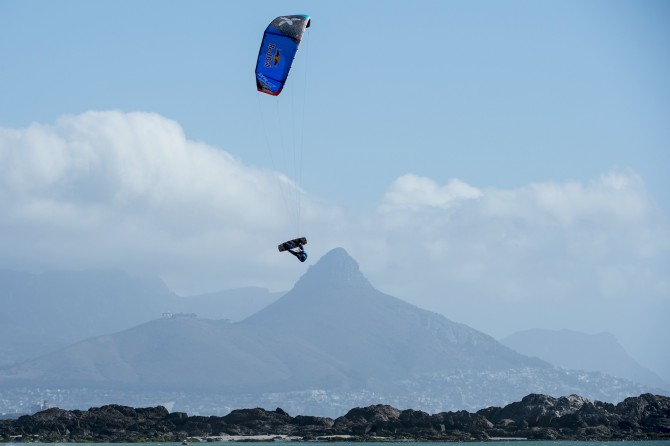 Riders like Ruben Lenten might be tempted back to the world tour to compete in the new Big Air discipline… Photo: Craig Kolesky/Red Bull Content Pool

There will be Qualifiers at every wave event scheduled during the 2015 season. 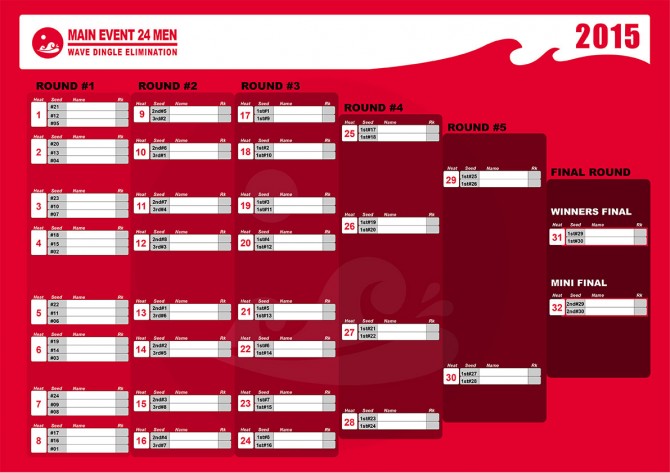 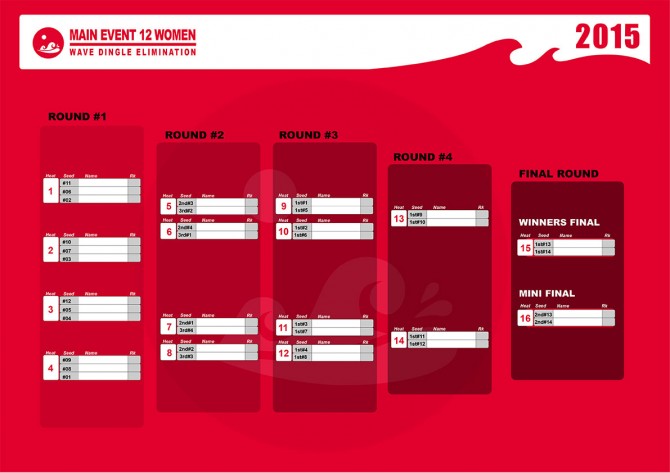 Wave prize money distribution will be as follows: 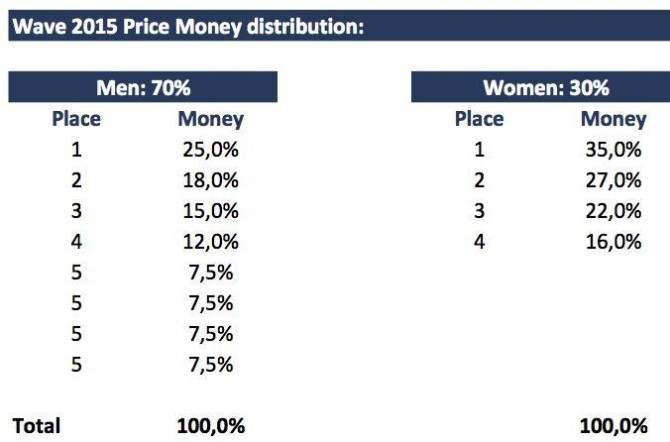 We are excited to introduce a new scoring format for the wave discipline introducing jumps.

Surfing: Competitors must perform to the judging key elements to maximize their scoring potential. Judges analyze the following major elements when scoring a Ride:
• Commitment and degree of difficulty.
• Innovative and progressive manoeuvres.
• Combination of major manoeuvres.
• Variety of manoeuvres.
• Speed, power and flow. 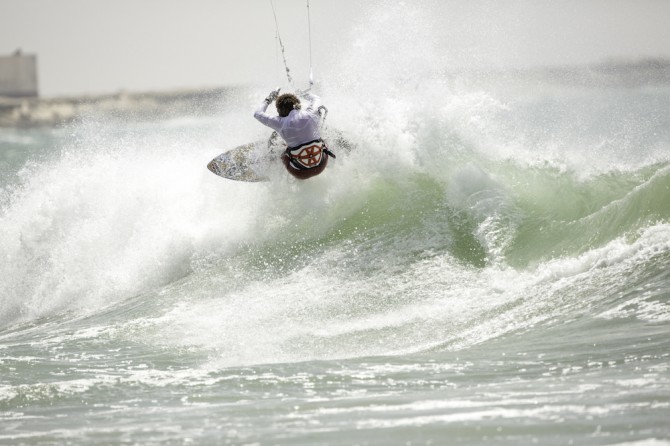 It’s important to note that the emphasis of certain elements is contingent upon the location and the conditions on the day, as well as changes of conditions during the day.

Competitors must combine the major key elements in order to be awarded scores in the excellent range.

Jumping: Competitors must perform to the judging key elements to maximize their scoring potential. Judges analyze the following major elements when scoring a Jump:

Jumping strapless and not grabbing the board is considered more technically difficult. 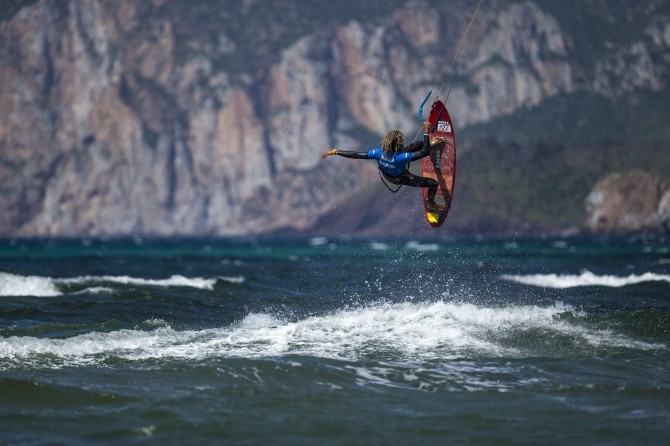 The aerial freestylers, like Matchu, will no doubt be looking forward to this new style of competition… Photo: Damiano Levati/Red Bull Content Pool

The number of waves ridden and jumps to be counted from each competitor towards the final result shall be decided by the Head Judge in consultation with the Riders Representative and posted in the ONB.

The total points of the best jumping score will be multiplied by a certain factor. The resulting number should be totaled to determine the winner.

The jump multiplying factor* shall be decided by the Head Judge and posted on the ONB.

* The jump multiplying factor would be any one-tenth decimal from 0 to 1 depending on the given conditions.
Please note that jumping, spinning and tweaking it on the wave while riding a wave is part of the surfing score.

Last but not least, we want to introduce the prestigious Overall title of the 2015 Tour.

Points will be given according to the end of year ranking results per discipline.

Disciplines that will count towards the 2015 Overall title are:

The best 3 end of year ranking results per discipline will count towards the Overall Ranking.

In order to be entitled for the Overall Title, a competitor has to finish within the top 5 position from the end of year ranking for at least one of the disciplines.

Prize money will be distributed only to the winners at the end of the competition year: 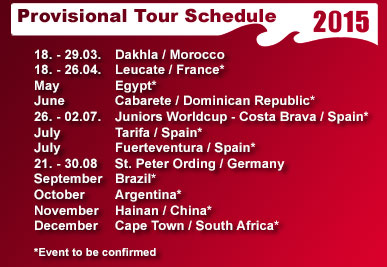 This looks like a good start, but we’ll need to see confirmation of dates soon…

Update: 18/3/2014 – The new site has just been launched and we were right all along! Welcome to the Virgin Kitesurfing World Championships!

"The Best Of" @ProKite Brasil