Check out the action from the PKRA in China, they’re currently riding in Pingtan and Christophe Tack and Karolina Winkowska have proved to be the riders to beat, winning the single eliminations today…

Christophe tack and Karolina Winkowska won the Pingtan kiteboarding World Cup 2013 single elimination in a spectacular manner.  Christophe tack picked up where he left off yesterday landing a massive front side seven and KGB five to score the highest heat total of the event (38.3) and defeated Alex pastor. Karolina Winkowska also defeated the current point’s leader Gisela Pulido in a very close heat with both riders landing perfect tricks.  The conditions were bit lighter than yesterday but were still close to perfect. During the afternoon the big air competition was run and Sebastien Garat got first place.  The perfect conditions of Pingtan China have provided the best possible conditions for hosting a kitesurfing World Cup and the top riders in the world. 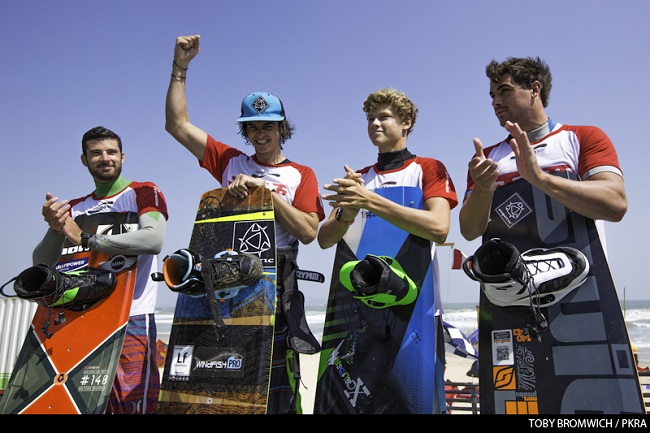 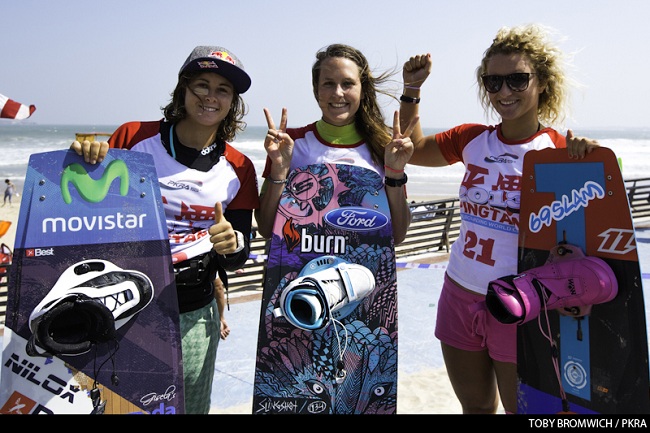 The first heat of the day was between Alex Pastor and Liam Whaley, both riders train and ride in Tarifa and know each other very well.  Whaley has been improving throughout the year and keeps getting better, he started his heat with a perfect front blind mobe and back mobe 5 and looked to be command until Alex pastor landed a grabbed KGB five and took the lead and the final spot in the final.  They both finish with equal scores and the tie was broken with the highest tricks score of the heat being the KGB 5 of Alex pastor.  After that heat the two finals were set along with the battles for third.  With Jana Schader being sick Paula Novotna got a bye and a third place finish.  Next it was up to Liam Whaley and Marc Jacobs to take to the water for the final podium spot.  This time Liam made no mistakes and defeated Jacobs to stand on the podium. 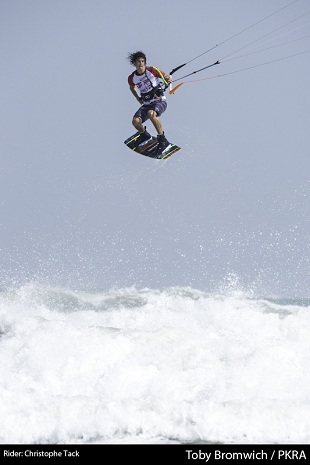 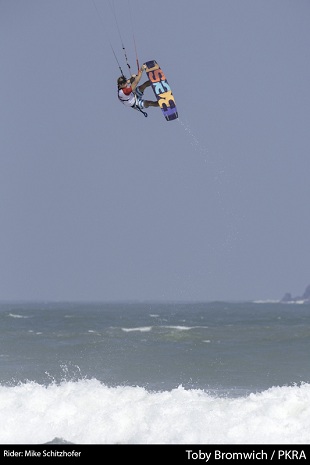 The final between Gisela Pulido and Karolina Winkowska’s was absolutely outstanding with both riders going trick for trick throughout the heat and being very close until the end.  Both riders landed great back mobes, s-1 and S-mobes. Karolina landed a nice 315 to move her into the lead in the dying minutes of the heat.  The two girls had a great heat and intense battle, but when it was all said and done, it was Karolina Winkowska who won the single and is now looking to regain the tour lead from Gisela Pulido. 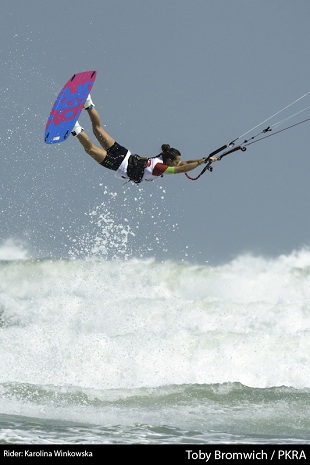 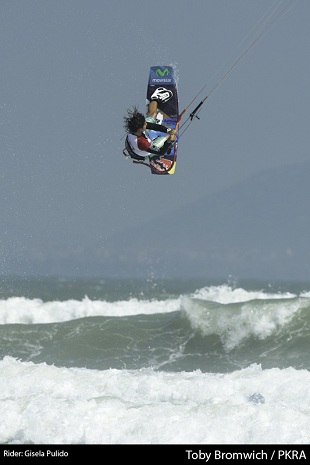 After yesterday’s outstanding performance it seem hard to believe the Christophe tack could out do himself again, but he left everyone speechless by doing just that in the final.  He landed two flat 7’s with a lot of height, a KGB five, a blind judge fives, a crow mobe, a front blind mobe and back mobe.  All of the scores were above seven and into the 8 range with the heat total of 38.3.  Alex pastor was riding well but was unable to stop Christophe.  Alex pastor is closer to winning the overall title but will have to wait until the double elimination. 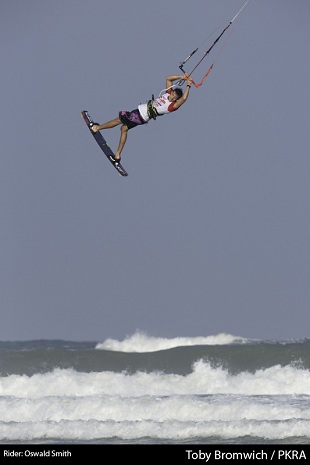 In the afternoon the race director decided to start the big air competition, with riders going for height and technical tricks. Sebastien Garat won the big air contest followed by Reno Romeu, Mario Rodwald and Oswald Smith.  It’s was a great show for the spectators to see some big jumps of the waves. 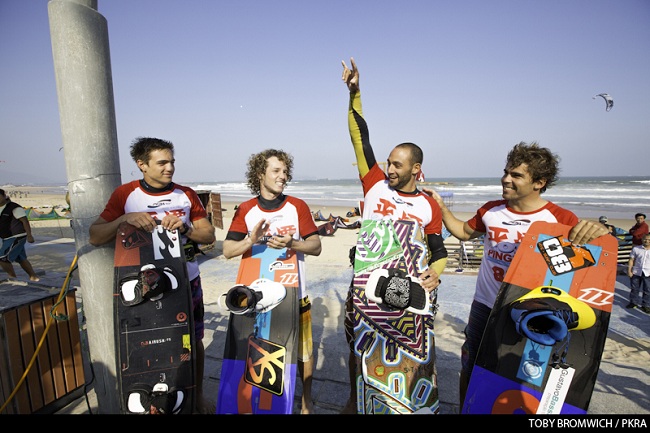 The wind is forecasted to build tomorrow and the double elimination will start and we would decide the winner of the Pingtan kiteboard World Cup 2013.  Christophe tack and Karolina Winkowska are definitely to riders to beat and the conditions seem to be playing into their favour.  Check out http://www.prokitetour.com for the latest news and photos. 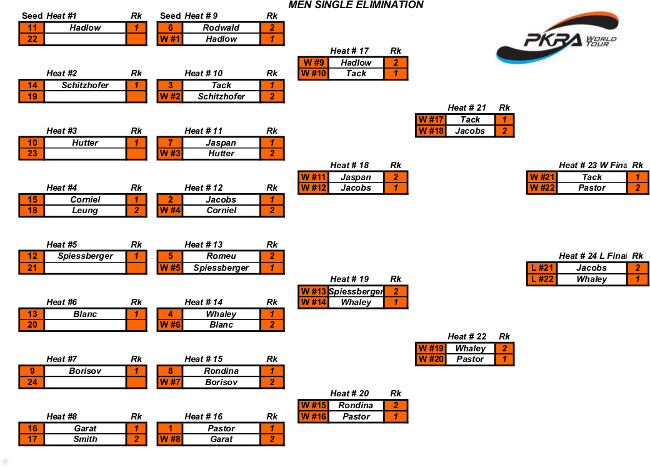 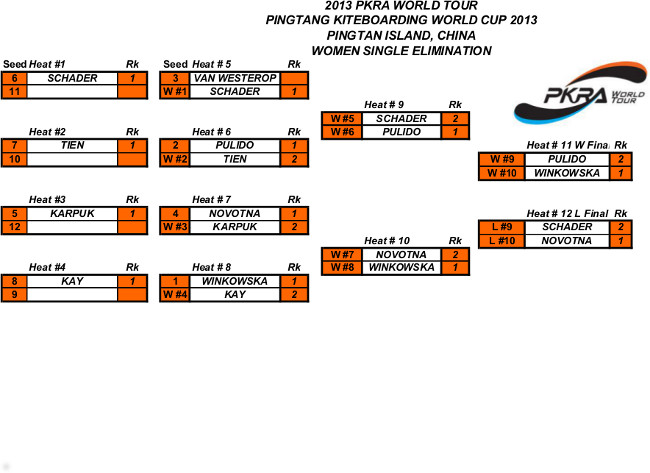 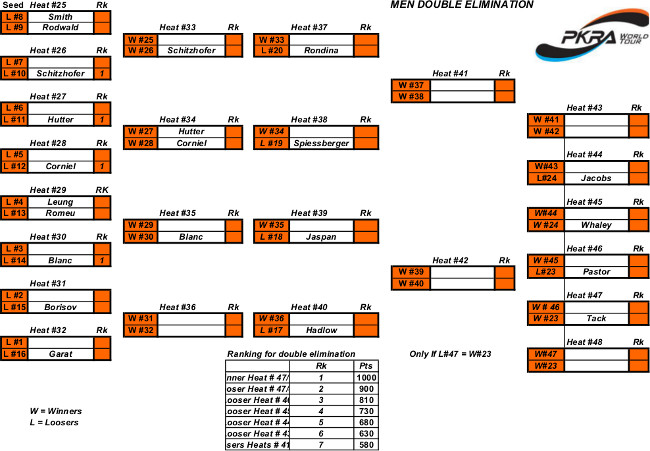 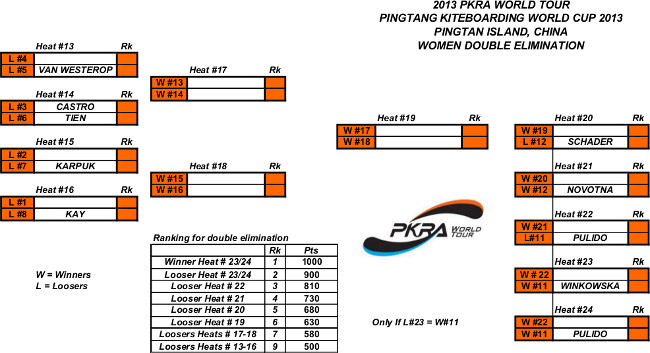