In case you missed it, Hadlow was back, Youri missed a beat, Pulido dominated Winkowska and Pastor was once again unstoppable! Will we be seeing a double Spanish crown this year?

The final heats of the double elimination were performed in perfect Leucate conditions with side-off shore winds at about 25-30 knots under sunny skies.  In the end it was the winners of the single elimination that won the double elimination and the Mondial du Vent PKRA freestyle event.  Alex Pastor won his 2nd consecutive title and Gisela Pulido her first of the year.  Annabel Van Westerop and Youri Zoon both made a good run at the podium but were stopped short by Bruna Kajiya and Marc Jacobs.  The next stop will be in Italy at the end of June for the 3rd spot of the year. 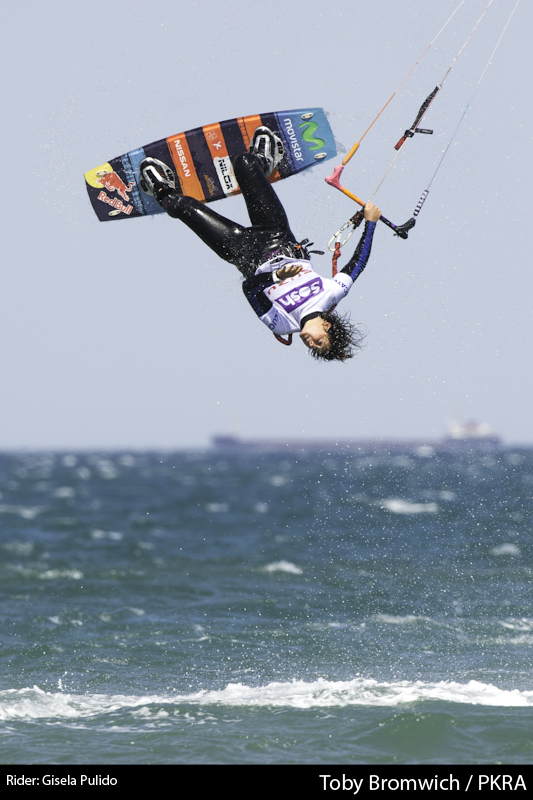 The double elimination gives the opportunity for riders that lost in the single elimination a chance to come back and win.  This is done so that in case you break a line or have a bad heat you can still come back and finish with a better result or in the case of the higher seeds they can lose a spot.  The competition started with the men’s heats of round 2.  The First heat between Tack and Blanc was won by Tack who found his rhythm early while Blanc was unable to land his big moves. 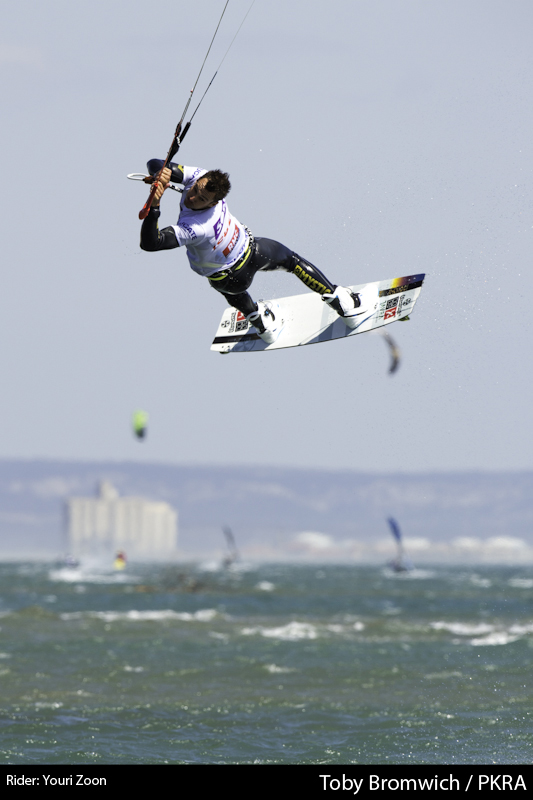 Next Zoon defeated Madson from Brazil and Schitzhofer kept on winning by beating Romeu Reno.  The last heat of the round the technical riding of Sam Light took out the last Frenchman from the competition Valentin Garat.  Next it was up to the women to take to the water.  In this round the young riders Switala, Van Westerop and Valesa all went through to the next round. 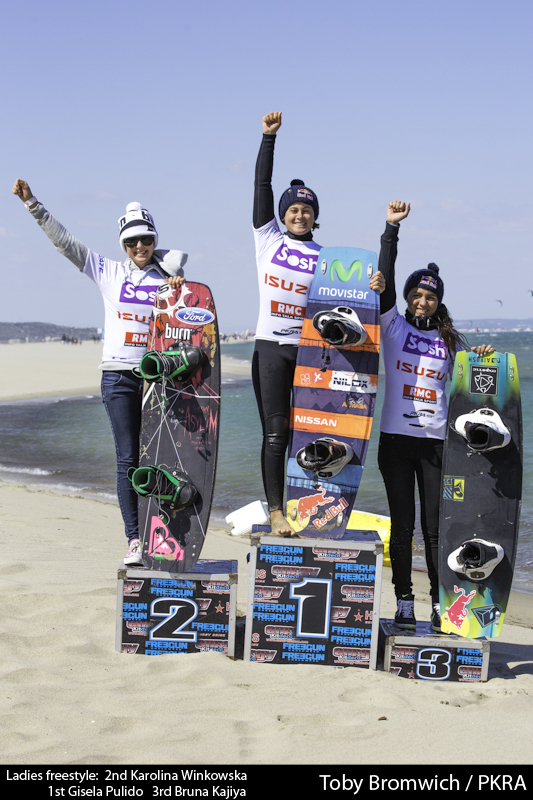 Round 3 of men was between the 4 riders that were in 5th place after the single and the challengers.  Only Da Silva and Mario Rodwald were able to hold their position against the challengers, Tack took down Liam Whaley in a very close heat and Youri Zoon kept his podium run going by taking down his country man and world champion Kevin Langeree.  The next round opposed Youri Zoon and Tack and Rodwald versus Da Silva.  Zoon and Da Silva’s explosive and technical riding were too good for the challengers.  The Zoon versus Da Silva heat was very exciting, both were going big, in the end Youri was ahead and Da Silva went for a big blind judge 5 and crashed it and bowed out of the comp in 6th place.

On the women’s side it was Switala and Van Westerop who kept moving forward in the competition by land their kiteloops and blind judges.  When they went against each other Van Westerop landed an S-1 to move on to meet Manuela Jungo.  The heat was very close between the two women but Annabel just kept landing her tricks and got a chance to challenge Bruna Kayija for the podium. 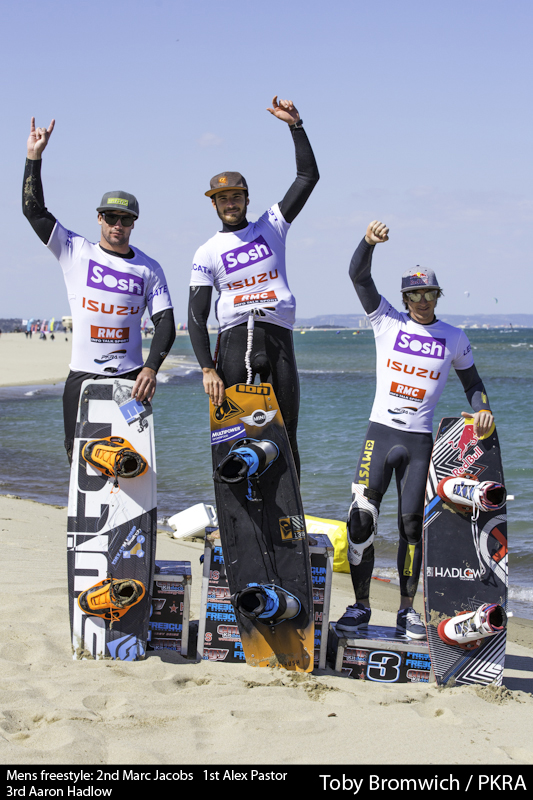 Youri Zoon had already guaranteed himself at least a 5th place, but he was not done.  He faced the Russian Borisov who had a brilliant competition going through the qualifiers and finishing 4th in the single elimination.  Zoon was still on fire and defeated Borisov with his big front mobe and back mobes.  Next he faced Marc Jacobs who was not ready to give up his podium spot just yet.  Marc’s late back mobe, grabbed slim and S-3 kept him on the podium and gave himself the chance to go against Aaron Hadlow. 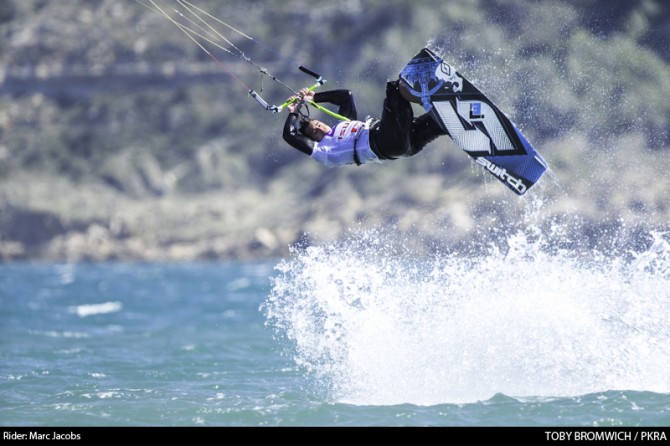 The Kajiya versus Winkowska was close, both were landing technical handle passes but Winkowska seemed to have another gear on her tricks and was able to put a little more power and commitment into her tricks and won the heat and got a chance to go after Pulido. 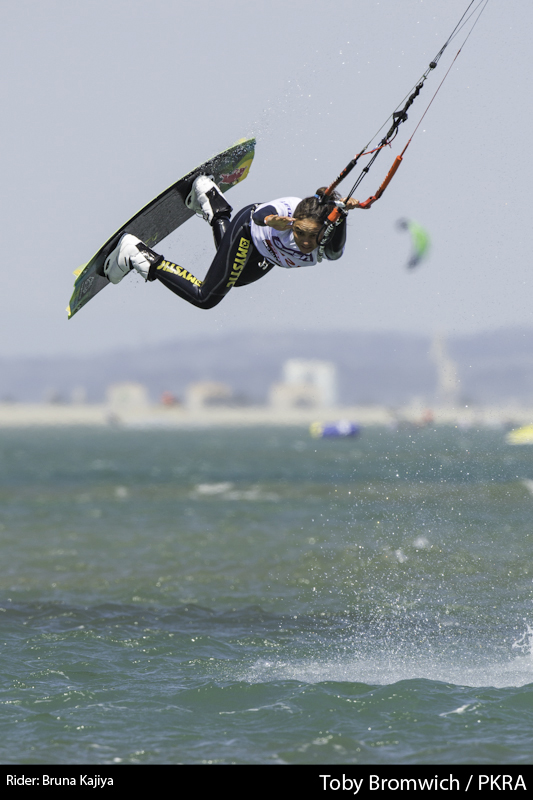 On the men’s side Marc Jacobs was against Aaron Hadlow.  Aaron came out and landed his tricks with fluid style in contrast to Marc who went all out from the start.  It was high scoring heat for both riders but Marc’s explosive riding got him into the final Against Alex Pastor. 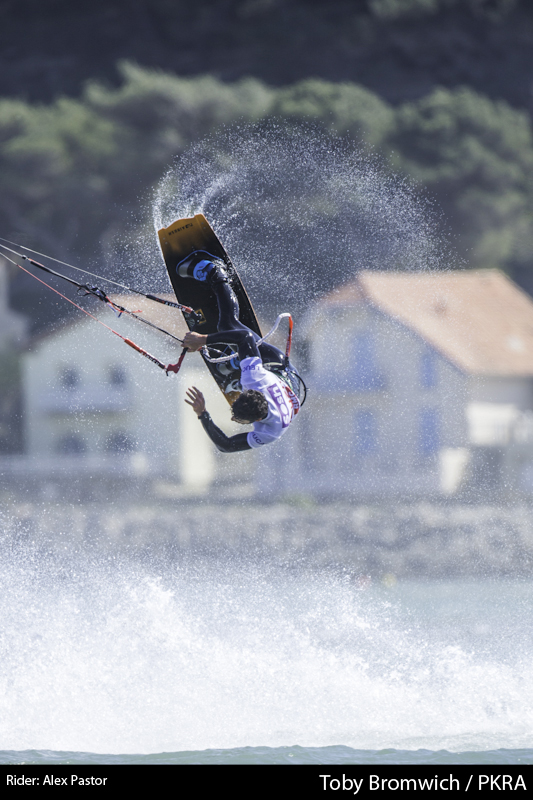 The women’s double elimination final was set between Gisela Pulido and Karolina Winkowska.  They both landed their blind judges and 313’s, Karolina got another S-1 in but could not get in enough tricks. In the end Gisela got four high scoring tricks in the gusty winds to win. Check out the full heat below:

The men’s final was between Alex Pastor and Marc Jacobs; Alex landed some amazing tricks: back mobe 5, double S-1, NIS, BJ and 313.  Marc did all he could, but he seemed to be a little of his game and could not mount a solid heat.  Alex Pastor Won the event with the highest heat score total of the day 33.86.

The conditions for the past 3 days have been classic Leucate conditions and a lot of fun to run the second PKRA of the year.  The 61 riders really made the competition amazing and put on a great show for the public.

Pastor and Pulido Win The Single Elimination in Fuerteventura