The KTA Asian Championship season has blasted off with an incredible week of kiteboard action from the beautiful Indonesian island of Bintan. Located South East of Singapore Bintan as every competitor that attended now knows has been one of Asia’s best kept kiteboarding secrets! 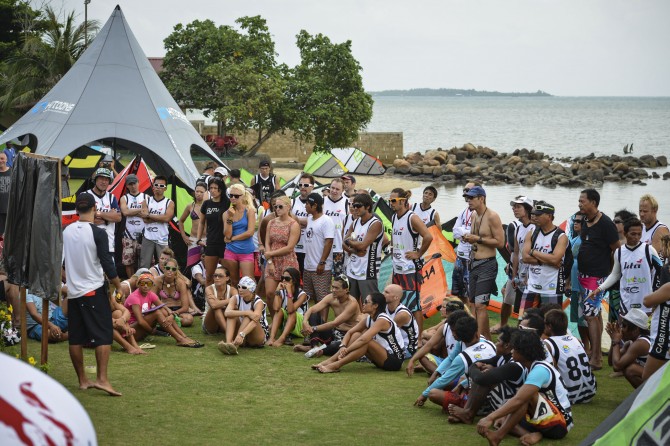 The Bintan event saw a huge turnout in both the male and female fleets!

Having been warned that Bintan would be a low wind venue every rider was pleasantly surprised by a week of near perfect wind conditions and flat water at the Agro Beach Resort the event hosts and venue for round 1 of this seasons Asian Kiteboard Championship Tour.

With the full support and backing of the Bintan Regency who were the title sponsor for the KTA Indonesia the event broke all KTA entry records with 123 rider entries from 23 countries for the freestyle and racing competitions that would take place over the week. In addition to the main Asia Tour disciplines the KTA also for this new venue ran a Weekend Warriors Fun Race for local and Singapore riders and introducde 20 school children to the skills of power kite flying through its KTA Kite Kids programme. Something that it now hopes will continue on a regular basis with the support of the local kite school and Bintan Kiteriders Community under PORLASI who became the first Sailing Federation in Asia to fully endorse a KTA event. 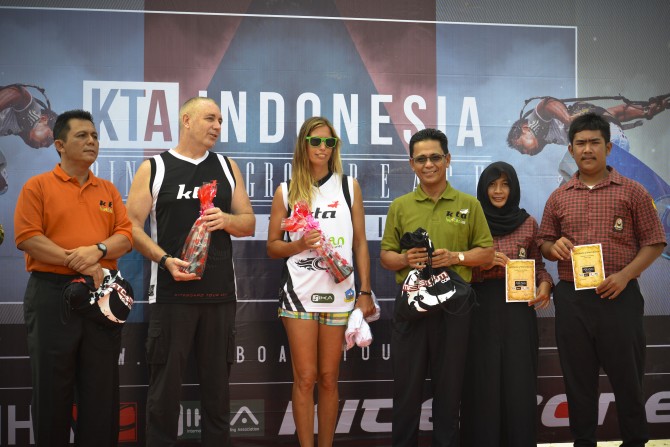 Part of the KTA’s philosophy is to try and support local development in the sport whenever it can and it was great to see its Rider Grants scheme help 11 Indonesian riders take part in their very first international kiteboard event.

The competition began with a breakfast Opening ceremony and Jong race, which formed quite a sight as they mingled with the kiteboarders also up and out there early to showcase the sport to the gathered government officials and crowds. Then following the Regent Mr Ansar Ahmad welcoming speech he fully embraced the event by strapping on a kite harness and launched a 12mtr marine kite for what turn out to be the first time he had ever flown one. Things were always safe of course in hands of KTA Open Champion and KTA Kite Kids instructor Kathrin Borgwardt, but never the less it was clear the Indonesia kite tradition was in Mr Ansar’s blood. 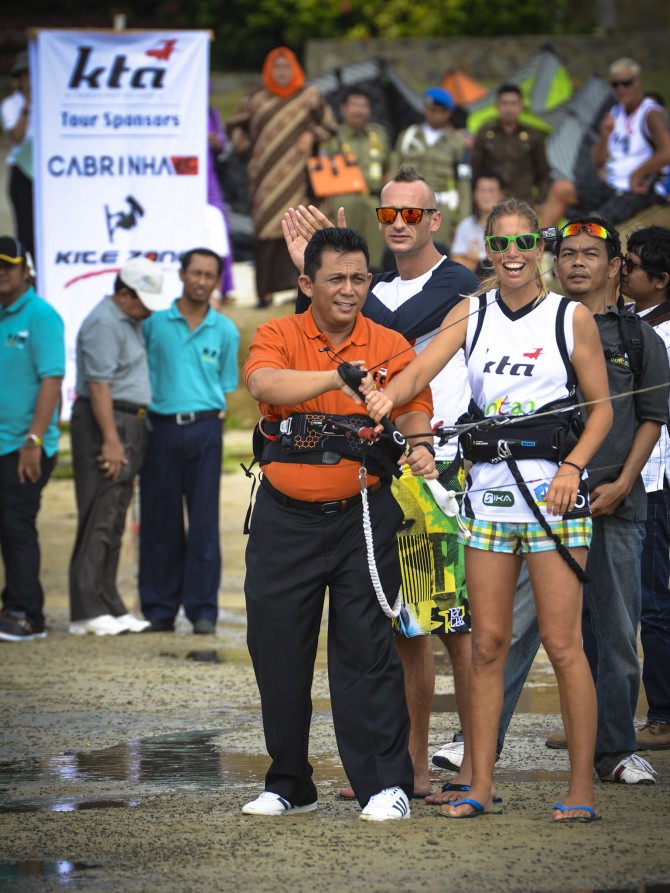 The competition proper began the next day with a full programme of course racing that gave the Raceboard (RB) and Twin-tip (TT) class racers a chance to get to grips with the new location in a race week that would by the time the Weekend Warriors joined them produce 50 races in total. Leading riders at this early stage for the women were Kathrin Borgwardt (GER) in the RB class who led the way from Liezl Tio (PHL) Fon Jantawan Benyapa (THA)and Aya Oshima (JPN) with the TT class lead being held by Rebecka Maudal (NOR) from Dina Muldasheva (RUS), Bengul Aykurt (TUR) and Anny Barlow (USA). For the guys the current reigning Asian champion Yo Narapichit Pudla (THA) was making it clear he meant business and if anyone wants his title they are going to need to work very hard to take it, though first time visitor to the KTA Denmark’s James Joyce and KTA regular Tanner Aykurt (TUR) were very much up for that challenge. In the men’s TT a big impact was being made by Atte Kapple (SWE)not only because he was making TT champion Jay Ortis and fellow Philippina Doque De los Santos fight him all the way, but also because he was riding in the RB class too, meaning he never left the water, except to change the board for the right one for the class he was riding in at the time. 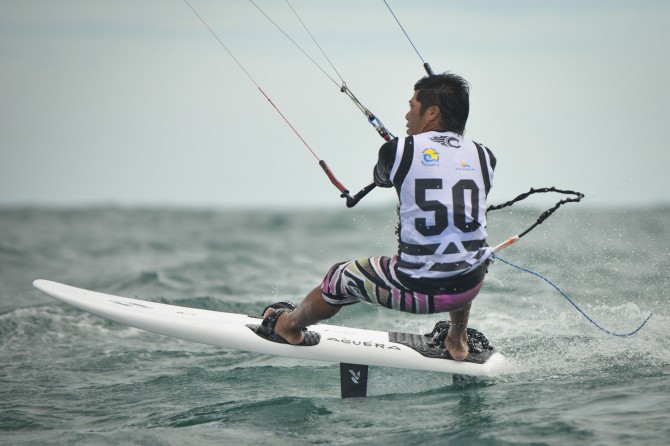 The racing bug has taken off on Asia too! 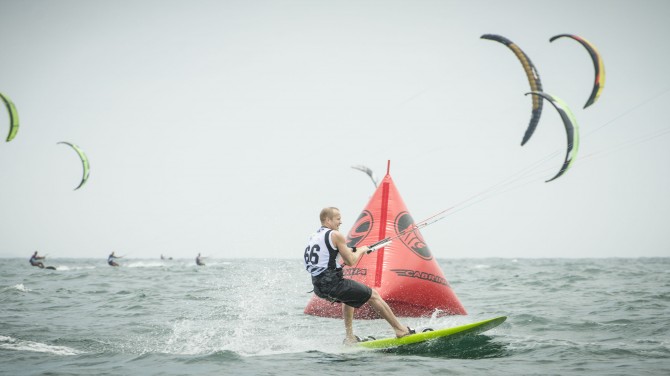 A very competitive fleet demonstrated their abilities on the water.

Day two of competition was again an early start as KTA Competition Director Stephan Hertig sort to take full advantage of the beach front flat water heaven to run the first heats of the freestyle single eliminator. Basically the tidal patterns for the week meant that freestyle would lead things out most days while the water was high enough in the lagoon to be followed by the racing outside the reef in the afternoons and with the consistent day long wind that held up around the 20kt mark this should have been perfect. However, the wind direction did not quite play ball and it soon became apparent that without the usual prevailing cross-shore wind that the location expects this time of the year that even the freestyle would need to move outside the reef. So the decision was made early and the team efficiently and quickly relocated to judge tower two on the reef. What a good call that was and the riders blasted their way through the singles, fully powered up all the way. 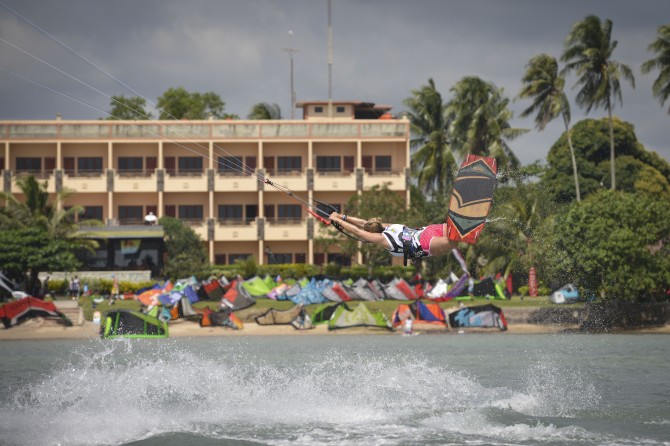 Throwing down right in front of the beach, the standard of riding was high!

It was soon clear that there had been a leap in the level of many of the freestyle riders over the closed season and with the girls fielding almost as many riders as the guys KTA freestyle is looking very healthy indeed.
At the end of the single eliminator the top positions were as follows:
Men – Long Nguyen Duc (VTN), Yo Narapichit Pudla (THA) and Reynard Along Gajisan (PHL)
Women – Kristiin Oja, (RUS) Victoria Soloveykina (RUS) and Ali Dudfield (AUS) 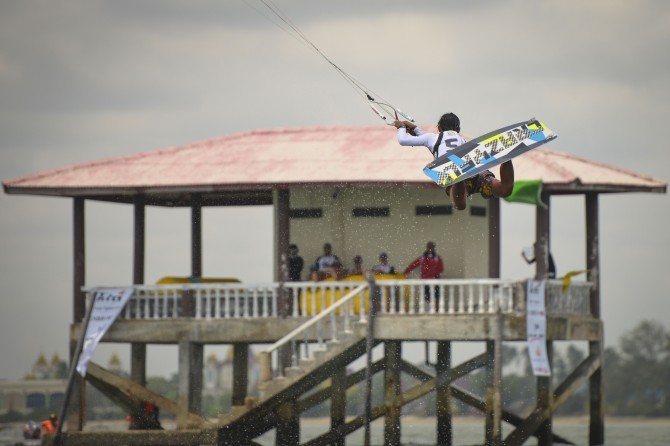 Nothing like pulling the trigger right in front of the judges!

The racers again also in action on day two with a further 6 races fired off to end the day’s proceedings. Then evening then settled into buffet dinner by the Agro Resort pool with big screen open air KTA movie night that featured the full TV show edit of KTA 11/12 season that is currently doing the rounds on TV channels across Europe and Asia with BBC Worldwide and the Outdoor Channel. 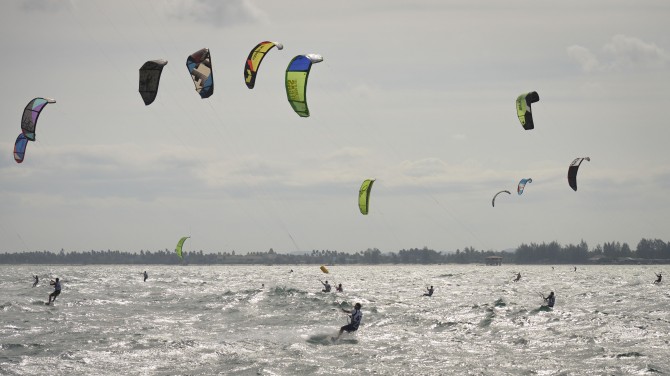 Plenty of racing went down over the course of the event.

The following day the action continued out at the reef judging tower with the freestyle riders once again enjoying strong winds. The double eliminators of course always offer the opportunity for good drama and potential comebacks and the crowds were not disappointed as the KTA’s youngest rider Christian Tio (PHL) fired his way through two heats beating riders twice his age only to be halted at a later stage. Turkish riders Tanner Aykurt and Kerem Balik along with Frenchman Stephane Decenciere were also back in the mix and riding hard. On the girls side of things Asian Champ Aya Oshima was trying to fight her way back, moving past visiting UK riders Polly Crathorne and Sukie Robertson but she was not quite the end able to unseat the top three. The finals though were taken to the wire with the first super final for the season as Kristin and Victoria fighting it out a further two times in a battle that would see Victoria final turn the tables and take the top slot. 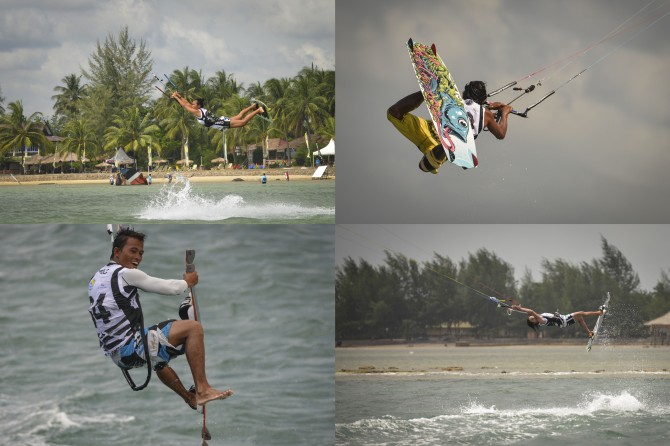 Conditions were perfect for both the mens and women’s heats…

For men the winners place on the podium stayed firmly with Vietnam’s Long showing that all his hard in the close season had paid off. He is certainly going to be someone to watch as the season unfolds and we all look forward to the head to heads to come when the unfortunately AWOL Asian Men’s Champ Ken Nacor returns for round two.

The freestyle competition was also the highlight for the local riders from the Bintan Kiteriders Community as their local rising star Agus Salim showed great determination in the second round to bring Indonesia back up to equal 7th position in the final rankings, a very respectable start to Agus’s kiteboarding competition career. 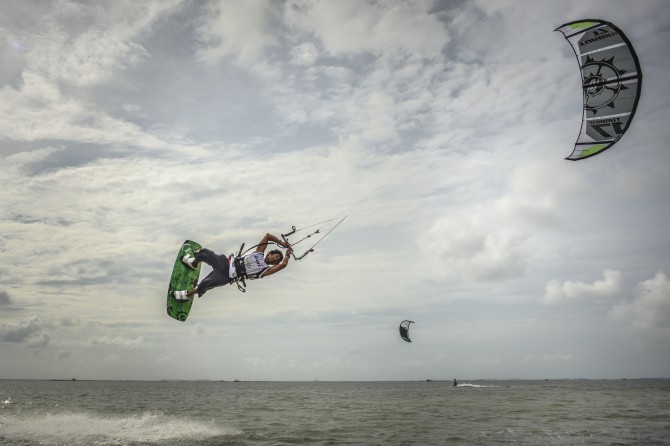 At this stage of the event it was also the turn of the Weekend Warriors to show what they were made of as they joined the TT fleet in what for many was their first racing experience. With the addition of the 29 Weekend Warriors the TT Class looked awesome as it tracked back in towards the reef and the upwind mark. Running off of a staggered start with the men’s TT leading out for the first one followed women and the Warriors who combined for start two, as you can imagine the pack was quite a sight.

It was a long day on the water but the day/night still had plenty to offer for everyone as the Bintan Regency invited the KTA to join them at the 2013 Bintan Cultural festival, something that gave many of the KTA team and riders the chance to dress up (never something you have to ask twice of course) in traditional Indonesian costume. Everyone then joined the hundreds of locals to savor the delights of the Bintan street food and market stalls and be entertained by dancers and players from across the various regions of the country – a very different KTA night indeed!

The final day of this cracking first round dawned with white caps already settling in to signify another solid day on the water lay ahead. With the freestyle now done and dusted it was going to be a full on race day with the RB Class leading off and looking to lay down 6 races to give team a good return for the event. The running order was as follows -3 men/women RB class back to back, then 3 men’s TT and 3 women’s TT/Weekend Warriors alternate, with the RB fleet back out to finish things with a final 3 back to back races. 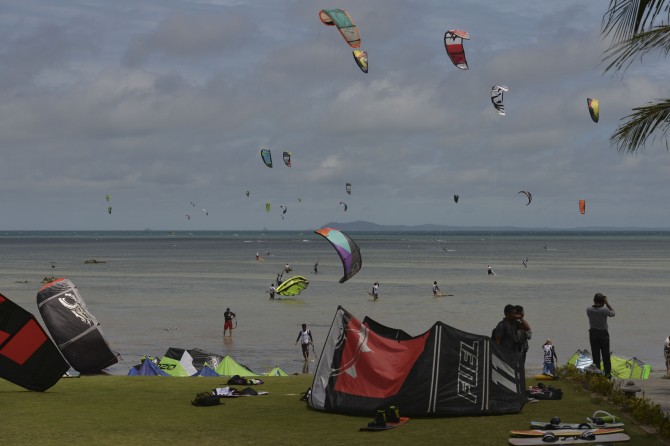 The racers head out to the start line…

Key battles were once again being played out though it was fair to say that Yo in the men’s and Kathrin for the women’s RB along with Rebecka and Atte in the TT remained dominate throughout.
All week the weather playing ball, with blue skies to join the wind which meant the KTA could stay with the outdoor theme for the awards and closing party. So with the riders gathered, the speeches of thanks given and beach BBQ devoured the moment that defines any competition got under away and the champions of KTA Indonesia were crowned. In total the riders were enjoying a US$ 15,000 prize package between them courtesy of our title brand sponsor Cabrinha and it was all smiles as awards were hosted aloft in celebration. 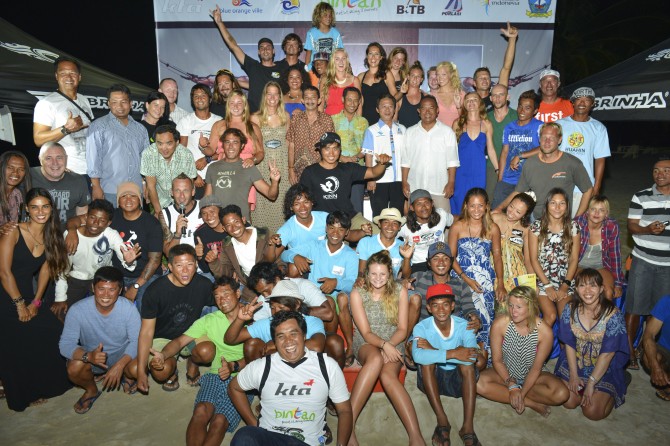 Smiles all round at the end of a great event!

Podiums galore and lots of winners!