El Gouna is a small town by the Red Sea that was established in 1989. EL Gouna originally started with a couple of hotels, and not much to do. I remember I used to dread going there as a kid! Over the past decade, El Gouna has thrived into one of the cosiest and most humble towns you will ever visit. The locals are warm-hearted and welcoming, and the people you meet are from all walks of life, from all over the world! The friends that you make there are friends for life. Once you visit El Gouna, you will always visit again.

In El Gouna; to Kitesurf you need to be signed up with a centre/school. All the kitesurfing centres/schools will provide storage for your equipment, so you don't need to carry it back and forth from your hotel daily. They will have bathrooms/showers and a restaurant at the facility as well as a full team assisting you in launching and landing your kites, packing your kite if you want and even washing your kite at the end of your holiday! The team will also have a rescue boat in the water in case needed. The cost of a week of kiting at the stations is approximately 45 GBP.

In Egypt; we only really have two seasons, summer and winter and El Gouna is windy all year round. During the summer (from March until October) the air temperature is between 25c-35c. Summer peaks around July and August and can easily reach 40c! The water temperature will be around 25c-30c during those months. No wetsuit is needed, but we do recommend you bring a lycra and SPF50+ sunblock. During the summer months we have more frequent days of wind, but fewer days of strong wind (over 30 knots)

During the winter months (from October until March) the air temperature will drop to about 16c and the water to about 19c. It only really gets cold (for us) January and February where the air temperature can reach about 12c. During those months you will need a wetsuit, a 4:3mm full suit is perfect. During the winter time, there are usually fewer days of wind (70% of the time) but stronger winds when it does come through! Overall, El Gouna is windy and pleasant all year round!

The best way to get around in El Gouna is via Tuktuk which charges a fixed amount of 15EGP/per person (which is roughly 50p) regardless of where you are going in El Gouna. Most Kitesurfing Schools will also have a Mini-bus that with be able to pick you up and drop you off after kitesurfing at the spot. Taxi services are also available.

El Gouna offers over 100 restaurants along Abu-Tig Marina and Downtown from fine cuisine to casual dining as well as a variety of cafes and coffee shops. Most hotels in El Gouna also offer The Dine Around Program, which gives hotel guests excellent opportunity to taste as wide a variety of the town’s fabulous food as possible. The Club House, downtown, is one of the oldest restaurants/beach bars around and they offer the closest thing to a home-cooked meal! Malu's Deli is also top of the list when it comes to delicious food!

El Gouna has something happening every night of the week. If you ask any local, they will advise you about where to go that night or switch on El Gouna TV channel; they keep you updated with everything that is going on! It's a small town, with a small community, so everyone knows everyone and parties together. Thursday night is the BIGGEST night in El Gouna as it's the start of the weekend (Weekends are Friday and Saturday in Egypt) so El Gouna becomes quite busy, and everyone heads out to Bartender, Duport or Aurora. On Fridays, it's "Kite Night" at Rush Sports Bar, and that is one of the most popular nights of the week as well, all the kitesurfers from all the different schools end up at our local sports bar for some epic tunes! The Bar stays open till 2 am and normally will stay busy up until then too, especially if there is no wind the next day! Another party night is "Urban Sunday", and this kicks off at the Club House starting 11:00 pm and they will blast RnB and Hip Hop till 2:00 am.

There are loads to do in El Gouna on no wind days. As El Gouna is all lagoons, you can have a SUP tour through the whole town in just a couple of hours. Sliders, the cable park is also very popular. Diving trips are arranged daily with Colona Divers, Orca Divers and more... If you need to take a break from any water-related activities, a hike in the mountains with Sytze is something you should tick off if you are in El Gouna.

Duport on a Thursday night

Hiking in the mountains with Sytze

Jen Tyler and Dylan on a SUP Tour!

The Club House on a Sunday Night

Search for Flights to (HRG)

Fiji is a beautiful and vibrant archipelago in the South Pacific. Here the pace of life slows as you’re now on Fiji Time! The locals do not stress and are some of the friendliest people you will find anywhere. The Pacific Ocean meets the islands barrier reef systems, head-on. Producing many exhilarating and varied world-class surf breaks, including the famous…

Punta San Carlos is one of the most rad places on the planet; if you are into riding waves, then you must have heard about this fabled spot already. It’s been frequented by windsurfers and surfers for over 40 years and is now home to a proper camp that has been set up and run by Mr Punta San Carlos,…

The Cayman Islands, a British Overseas Territory, is made up of 3 islands in the western Caribbean Sea. It is famous for its tax havens to many global businesses, but recently kiteboarding has prospered due to the warm Caribbean waters and steady trade winds. Located south of Cuba it is a relatively close hop from Miami, so there are lots…

Jen Tyler grew up in the chaos of Cairo, Egypt. It was on the beaches of the Red Sea where her love for the ocean, water sports and adventure grew.

Been to El Gouna? What did you think?

Where are the Best Kitesurfing Beaches in El Gouna?

Element Watersports is the biggest spot in all of El Gouna, offering windsurfing, kitesurfing and SUP.
With no reef and 1.5 km of shallow water, it is the perfect spot for people of all ages and skill levels to learn or perfect their technique. They have enough water during high and low tide and consistent winds for 80% of the year!
They have a NORTH sliders and kickers area in the water for the more advanced riders to play around with and offer NORTH equipment for rental as well as F2.

Their centre is the perfect location for a watersport holiday with a bar and restaurant, Bedouin tent, shop with surf-wear, massage room, soccer and beach volleyball, kids play area and trampoline and weekly sunset BBQs ready for when you come off the water! 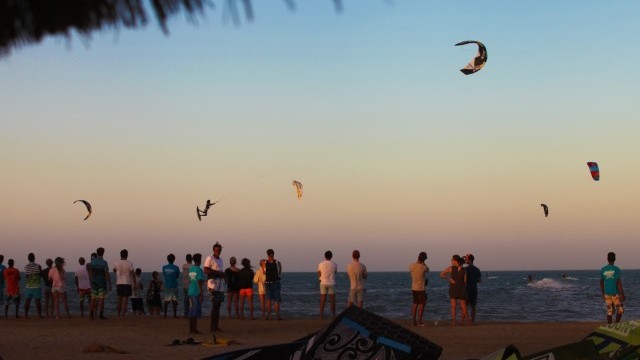 KBC (kiteboarding Club) is further down south. The spot is quite shallow during low tide except for in the lagoon where most of the riders will be during low tide. The centre hosts some great post-kitesurfing session evenings as well as weekly BBQs! KBC offers f-one kites for rental and sale. 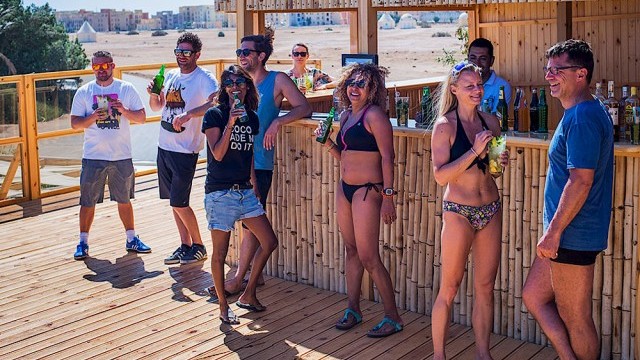 Red Sea Zone is about 50 m south from KBC. RSZ is the only polish school in Egypt. Their instructors are passionate and professional, pushing their skills every day by teaching, training and testing the equipment.
"We are serious about kitesurfing – it is our passion, but most of all it is our way of life. We will take care of the highest quality of your training, as well as safety and fun! Trust us – we know how to make you fall in love with kite and board :)" 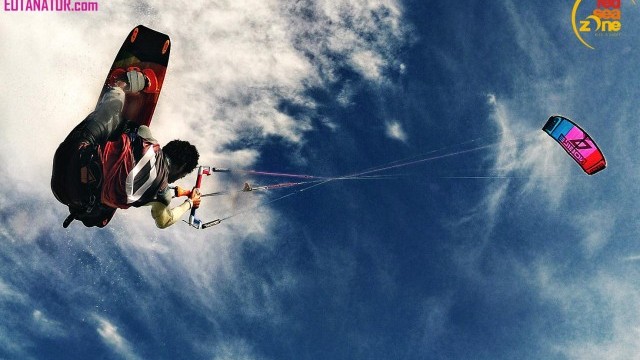 Based at the Mövenpick Hotel, Kite people's location is sweet! Whether you want large shallow water lagoons, deep water, off-shore reefs or remote island boat trips they've got it - perfect for beginners, intermediate or experienced riders. 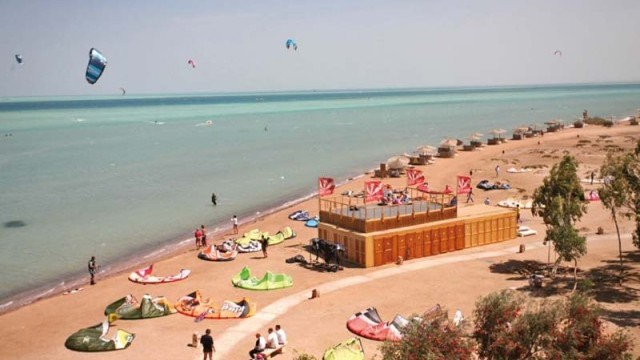 Based at Club Paradisio Hotel Osmosis is directly in front of the beach, from your bed straight on the water!
Freeriders start as usual directly from the beach. After the shallow lagoon, it goes straight into the deep water.
Access to deep water is clear. No corals, reef or stones which makes it safe to kite during low tide

At low tide, the water can be very flat, during high tide and strong winds there is a small wave building up. On some days it can be even nice for a little surf. Welcome to the only “wave spot” El Gouna! Enjoy some small waves, the flat water or go cruising with dolphins and turtles between the beach and the offshore sandbar. 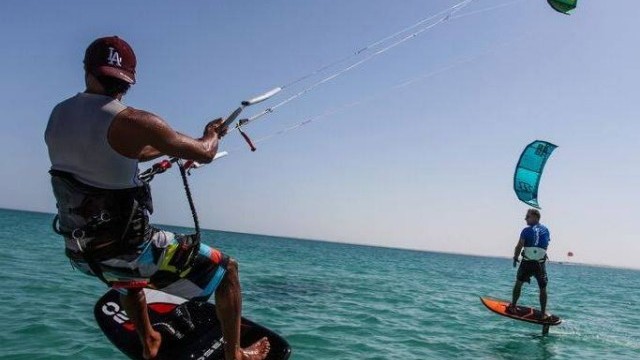 Tawila Island is one of the most magical places you can kitesurf in El Gouna! For this, you will need to join a boat trip; most Kitesurfing Centers will organise it once a week. Flatwater, white sand beaches and a lot of wind. What more could you ask for? There is also an 80% chance of seeing dolphins on your way there and back and possibly even at Tawila Island itself. If you get an opportunity to join a Tawila Island trip, I strongly recommend that you do!

When is the Best Time to go Kitesurfing in El Gouna?

Search for Flights to (HRG)

Veteran Egyptian traveller Lewis Crathern heads to El Gouna, a spot he hasn't been to before to check out the kiting and the FoundersKiteClub.

Riders put on an unbelievable show during the semi-final and final heats at the El Gouna RRD Centre Kiteboarding World Cup. Brazilian's Carlos Mario and…

Freestyle action from day one of the 2016 El Gouna Kiteboarding Grand Slam.

Watch as Eudazio da Silva takes advantage of the perfect training conditions in El Gouna, Egypt. Eduazio is shown a good time by his Nobile…

The gorgeous Charlotte Consorti enjoying the warm turquoise waters of Egypt and making us wish we were out in El Gouna too...and not just for…

KB4Girls with Kristin in El Gouna

Kristin Boese has to be the hardest working woman in kiteboarding! Not only is she an ambassador and pro rider for Best Kiteboarding, she also runs the…