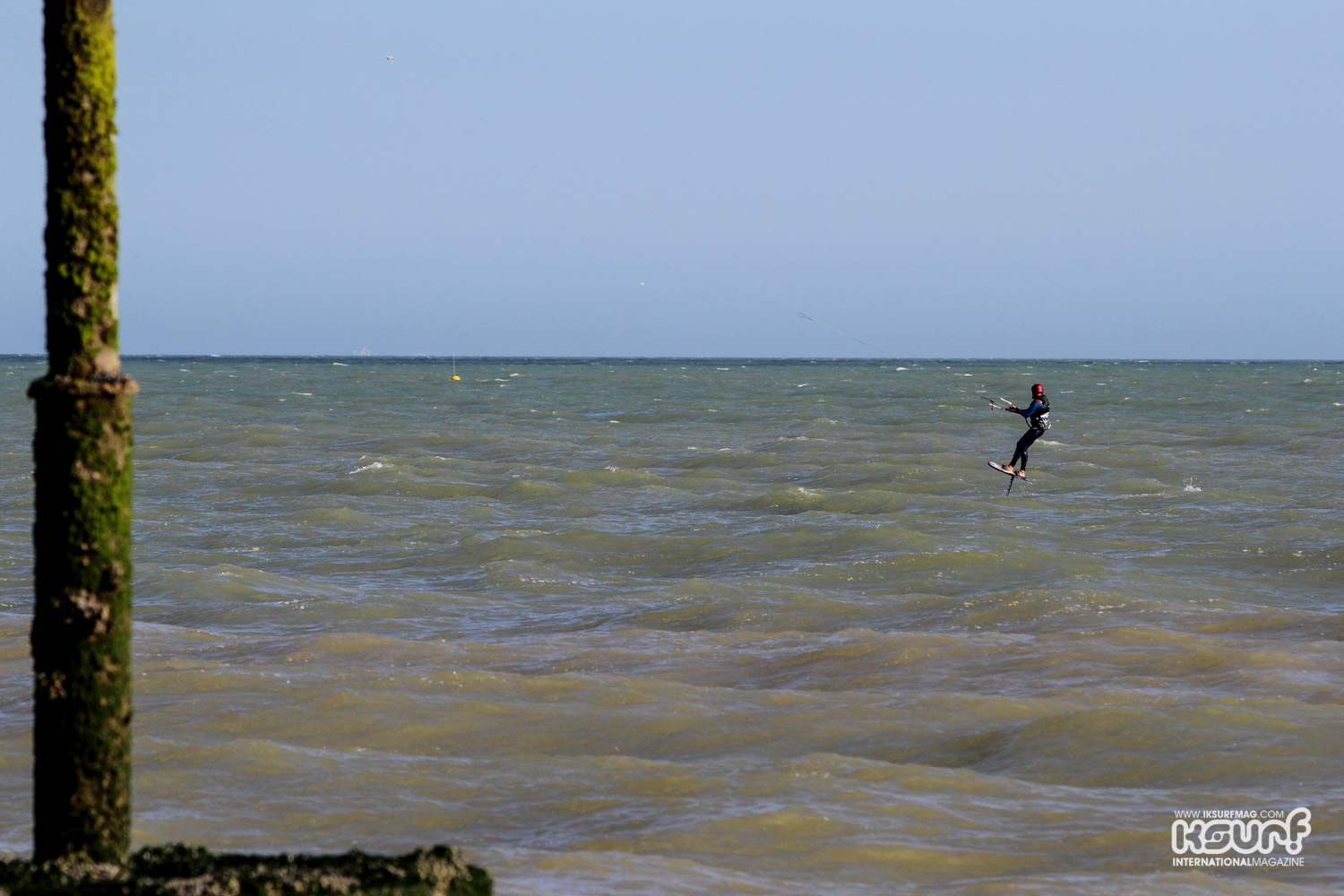 After a couple of hours I was starting to get some flights, albeit short ones! Photo: Mary Booth

I’ve always been one for trying something new, whether that was skim boards and surfboards with kites, or race boards when they arrived, essentially I’ve always enjoyed the challenge of learning. As an ex multi sports instructor I guess I take pleasure in teaching and coaching too, so when something new comes along in kiting I usually jump at the chance to try it.

It seems odd then that it has taken me this long to swing a leg over a foil board, they’ve been on my radar ever since the first Carafino foils were marketed to kiters. Something however just never grabbed my attention enough to make me want to try. When I stopped racing Formula boards a couple of years ago a few of my buddies jumped aboard the foils, but not me. 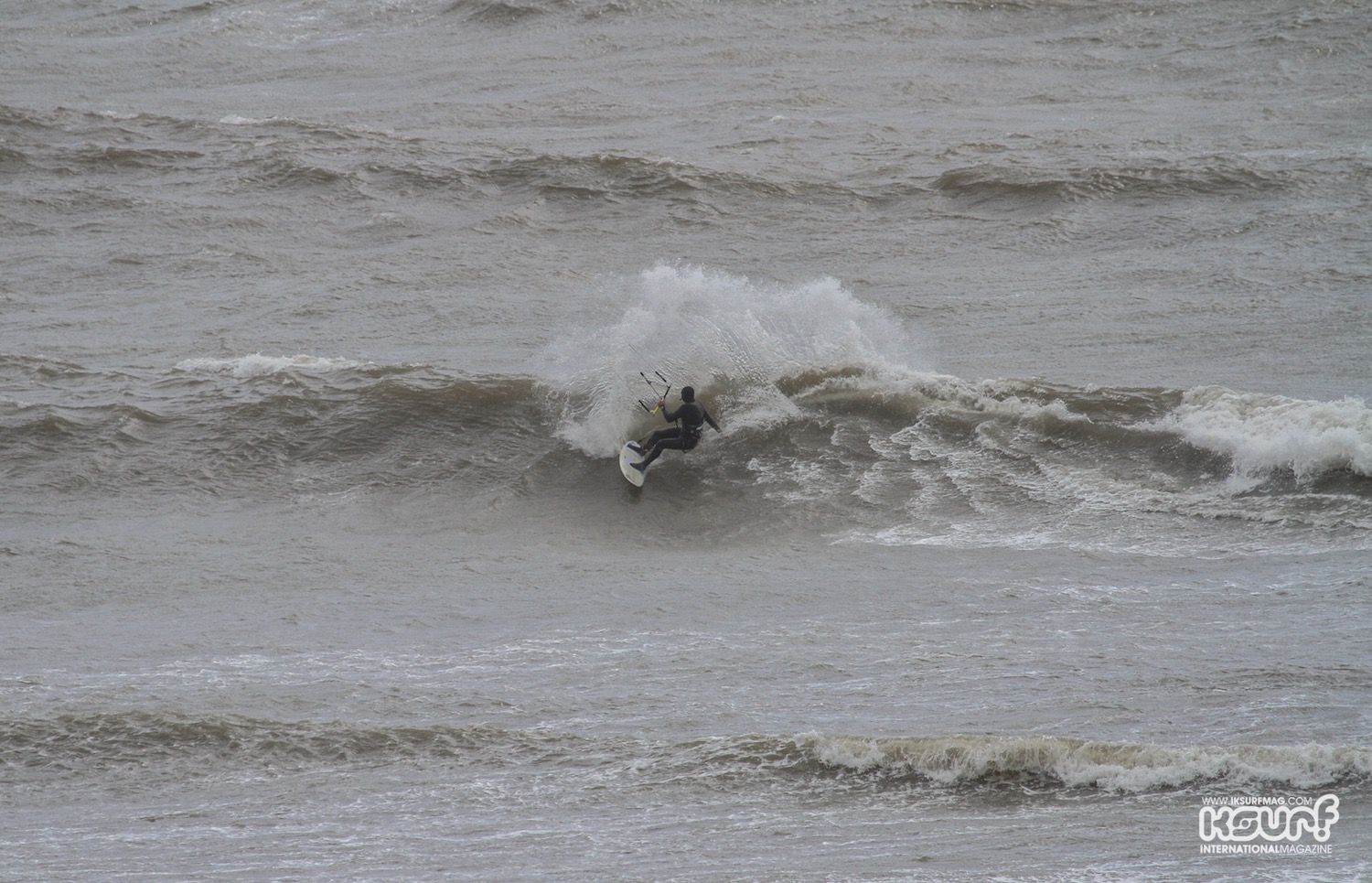 I’d just spent the winter in South Africa and had rekindled a love for waves and wave riding, other things were eating into my time too and the limited time I had on the water I wanted to spend on the surfboard. This winter we were off to the Caribbean again and some time in the Dominican Republic seemed like the perfect opportunity to learn to ride a foil.

I made a concerted effort to get hold of one before I left, but with the boom in demand they were as rare as rocking horse sh!t and I ended up flying over empty-handed. I say empty-handed 250 kilos of excess luggage between the three of us is hardly empty-handed! 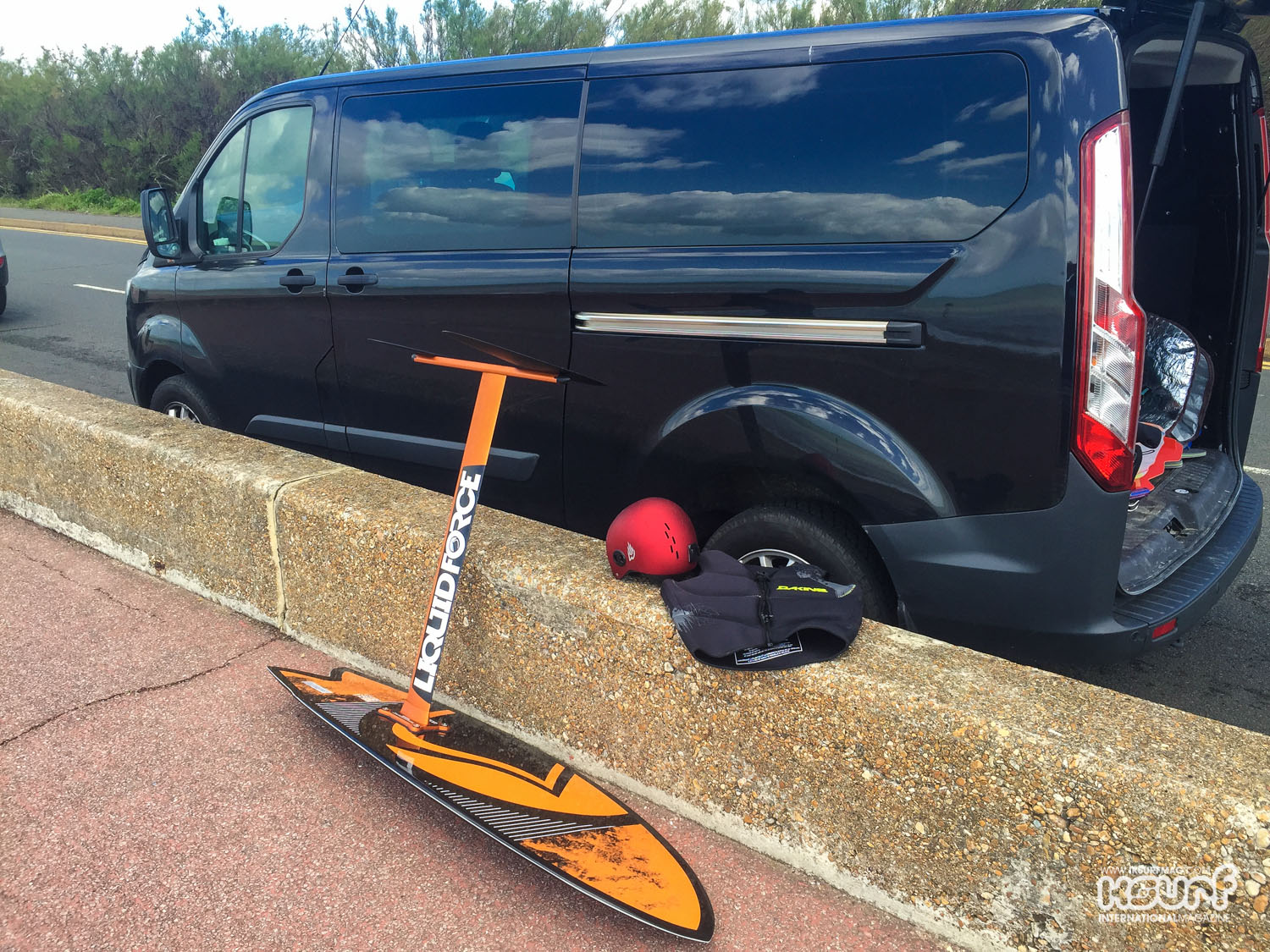 On my return I expressed a bit of interest to a few brands but I wasn’t really chasing hard. Anyway, fast-forward six weeks and Andy Steel (the Liquid Force Brand Manager in the UK) mentioned he would have his demo Foil Fish at the British Kitesurfing Championships that we were running. The deal, so to speak, was done and I was going to join the club…

After the event the wind howled so hard they ran the Megaloop Challenge in Holland, hardly the sort of conditions you need for a first go. The next day there was a dropping forecast and decent weather. I figured an early start would allow me to catch the last of the wind… 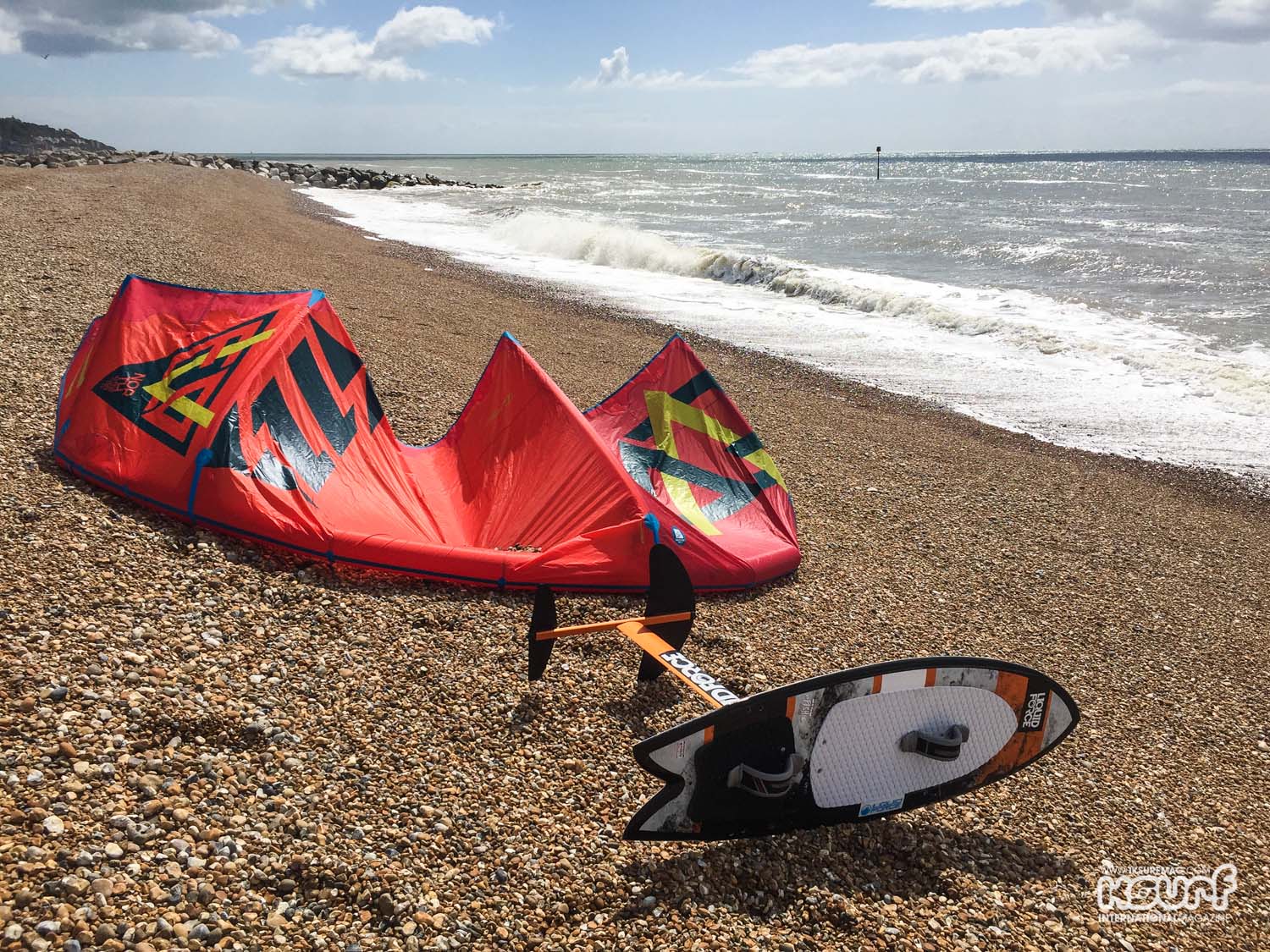 The wind looked good to start with!

When I got to the beach there was a gentle breeze, perfect for a first go, although as I rigged up the wind dropped and I was left wondering if it was going to work. A new toy is enough to make anyone take a punt at sub-optimal conditions though, so off I went.

First up, have a crack at body dragging, tick; second, try a waterstart, and fly straight out the front door, tick; next, actually try and ride the thing. I’d moved the straps to the forward position to help to keep the board on the water and not in the air. As the wind was so light there was no danger of me getting off the water though!

I was flinging the kite around like a madman doing my best to balance on the board as it chugged along slowly. This was hard work, really, really hard work! I was knackered, disappearing downwind, but I was getting better. After ten minutes I seemed to have mastered the going backwards and forwards on the water part, although it was taking an incredible amount of concentration. 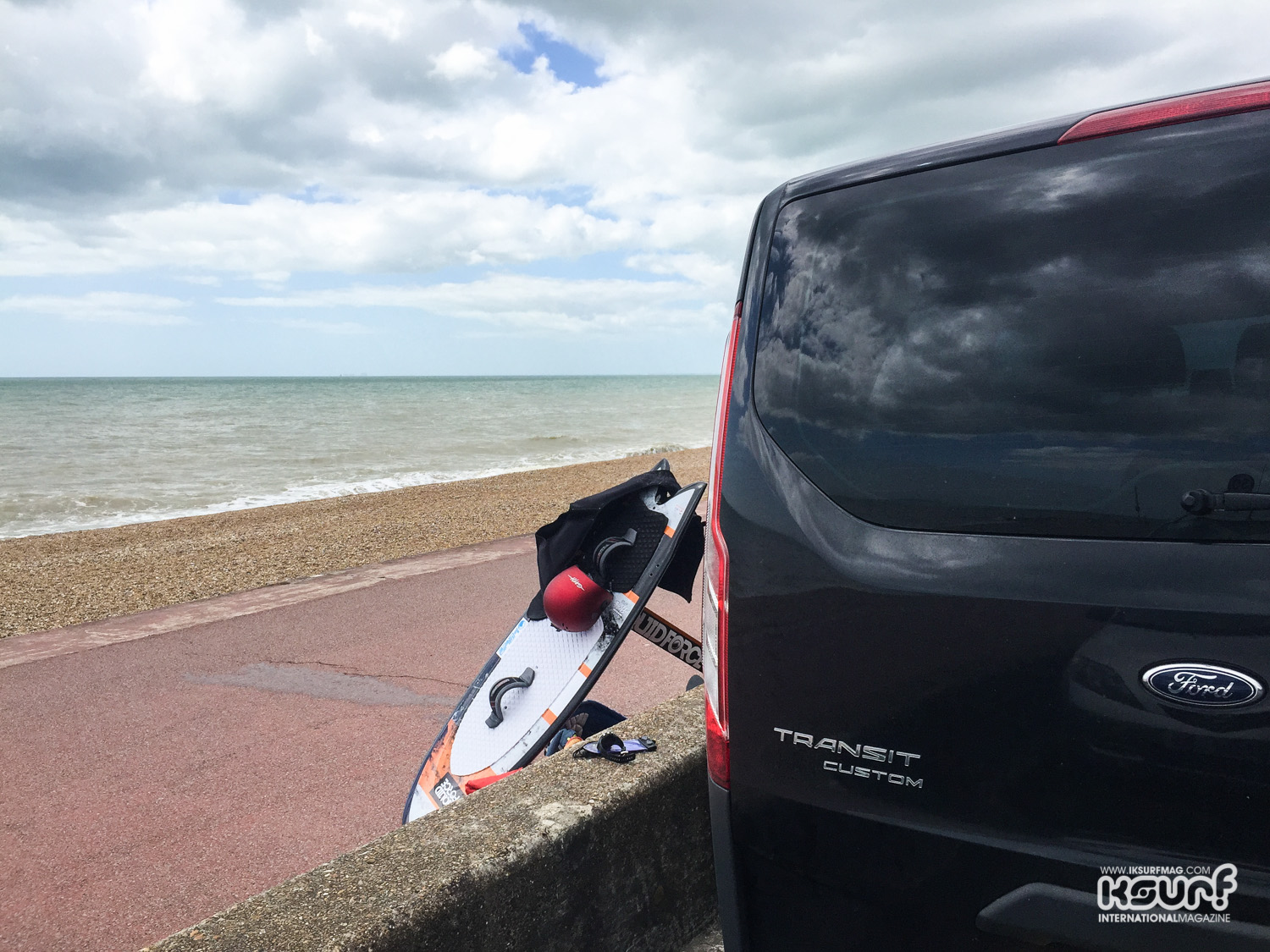 Then, just as I seemed to be getting better, disaster struck, the wind dropped to nothing, swung offshore and the kite wouldn’t stay in the air. That was it, a reasonable swim in and the end of my first session, just 20 minutes of water time. 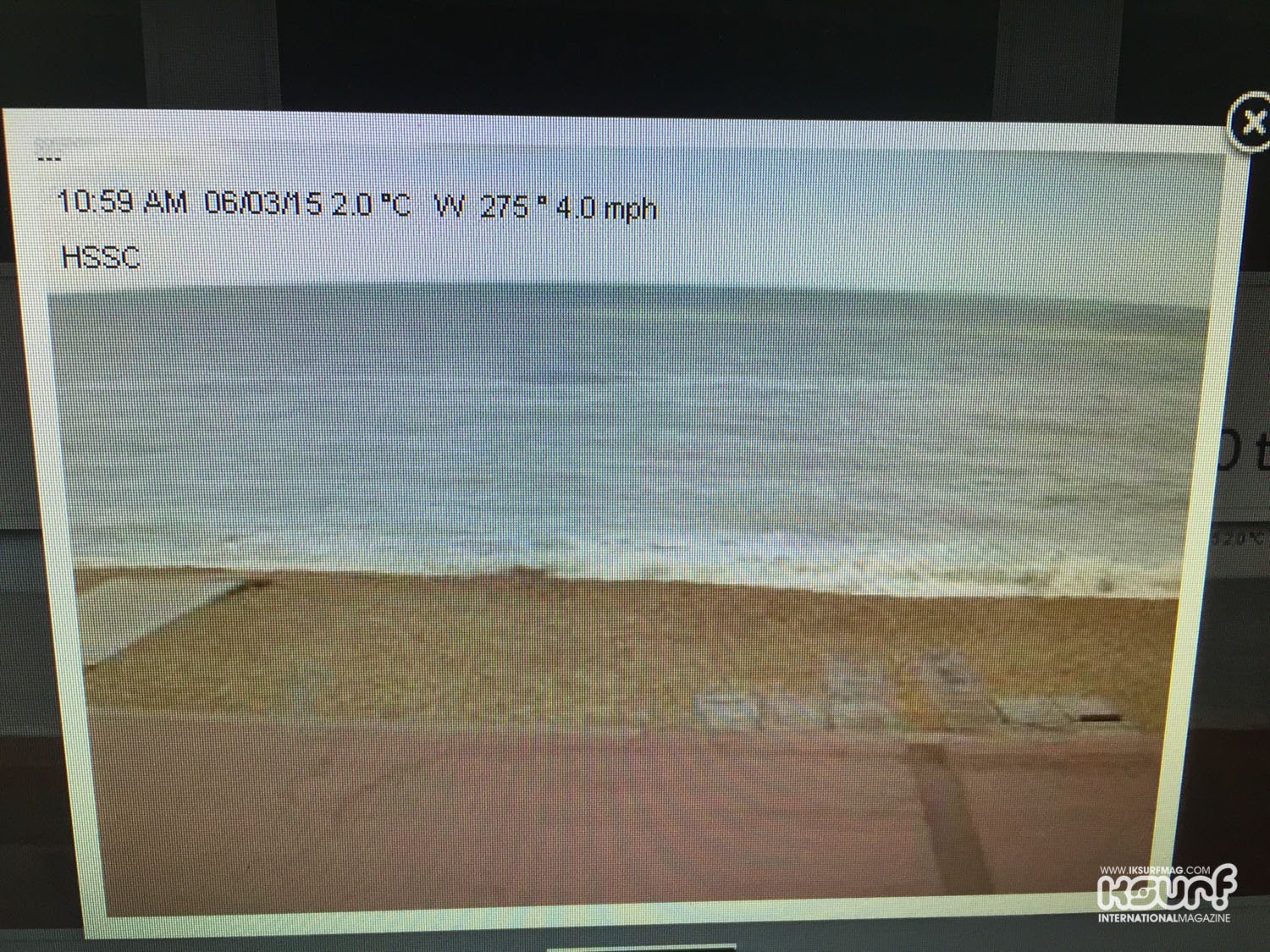 The weather station reading, 4mph, no wonder I had struggled!

I have honestly never felt like such a complete beginner again. Learning to ride a race board was a lot easier, but still tricky. This was truly humbling, however I consoled myself that the wind was light and that it might pick up later. I swung the foil across my back like Jesus carrying his cross and made the trudge back to the van. I’d covered a distance of 1.3 miles according to my Suunto, not quite what I was expecting!

Not the most impressive GPS track, I thought these things went upwind!

Ding ding, round two. As the sea breeze filled in I decided to try again later in the afternoon, this time the nerves had subsided, it couldn’t get any worse right? The wind was far better with some good white caps and the strength just touching a force 4 in the gusts. I rigged the 9m F-One Bandit this time, not wanting to be overpowered and got myself into the water. 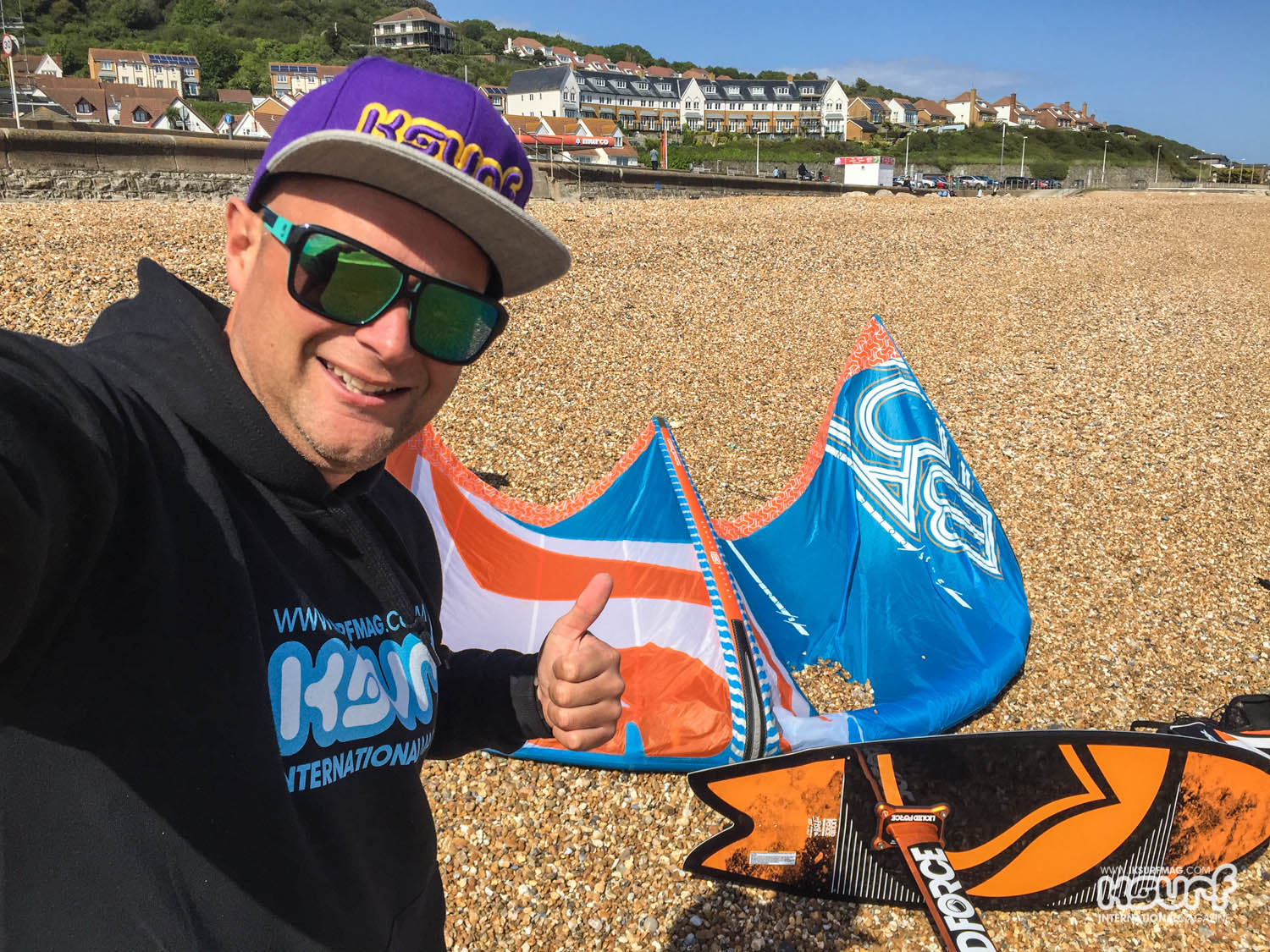 Wind looking stronger and not feeling as nervous…

Instantly it all felt better, the wind was there, I could get a little more speed out of the board and feel the foil starting to work underneath me. There were a few spins into the wind, too much back foot, a fair bit of porpoising, not keeping even pressure on both feet, and plenty of out the front door stacks.

Occasionally I would get up on the wing for a few seconds and start to feel it fly, and then I would crash again – this happened a lot, an awful lot. I’ve never slammed so much in a single session ever. It is worth mentioning I was following the sound advice of wearing a helmet and impact vest and I was exceedingly glad of them. 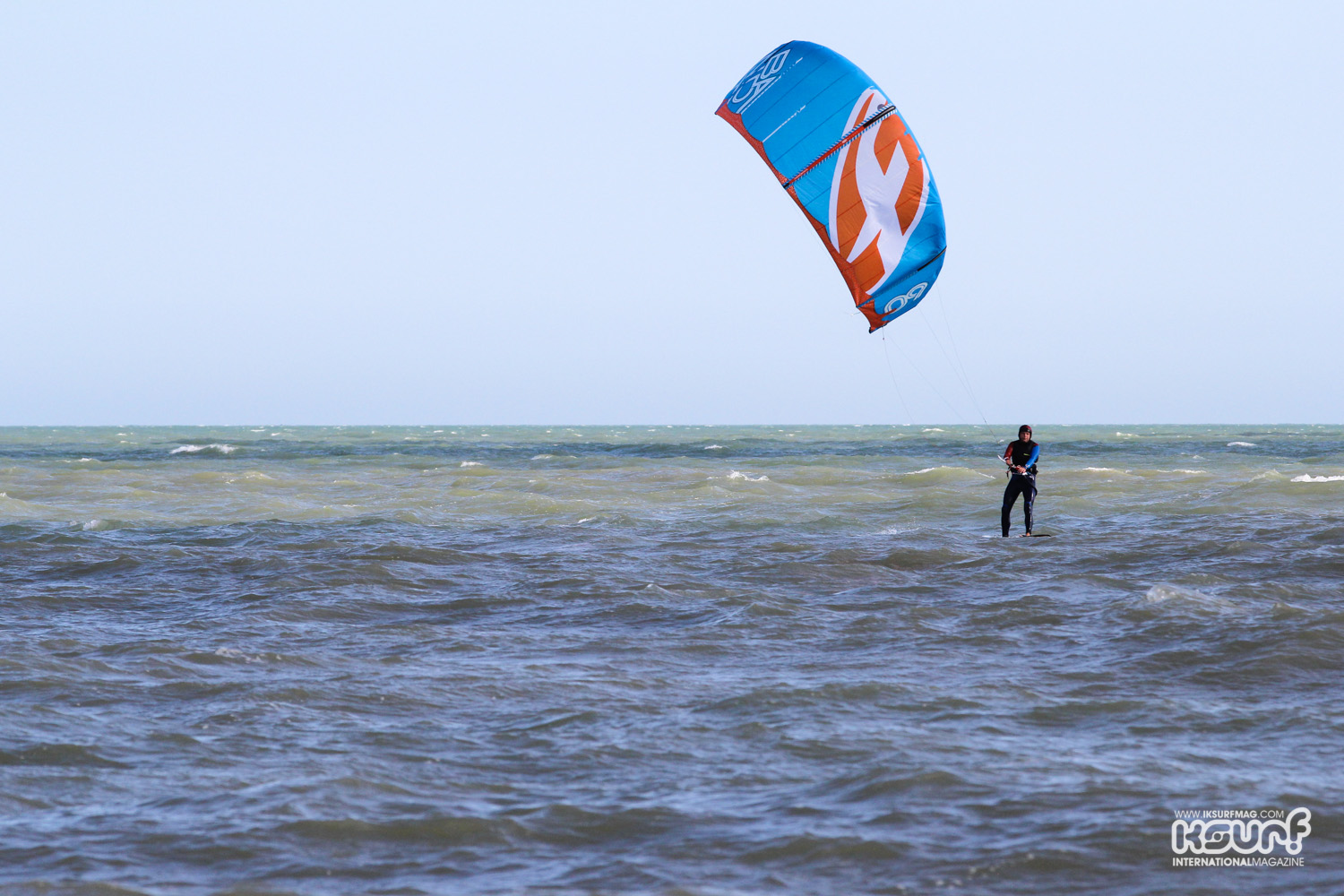 On the water the riding came quite easy… Photo: Mary Booth

I discovered the worst kind of crash is where you fall over to leeward and the board flips up to windward which means you meet the foil side on as you fall in. After a couple of these I made sure it didn’t happen again. If it wasn’t for the helmet I’d have been in trouble.

I had a couple of eureka moments where I was up on port tack and feeling comfortable, as I ride regular this was easily my favoured tack and by the end of the two hour session I was getting more confident. Starboard was still tricky but I managed to stick a half decent flight on that tack near the end. When I say flight, I’m counting in seconds not minutes. 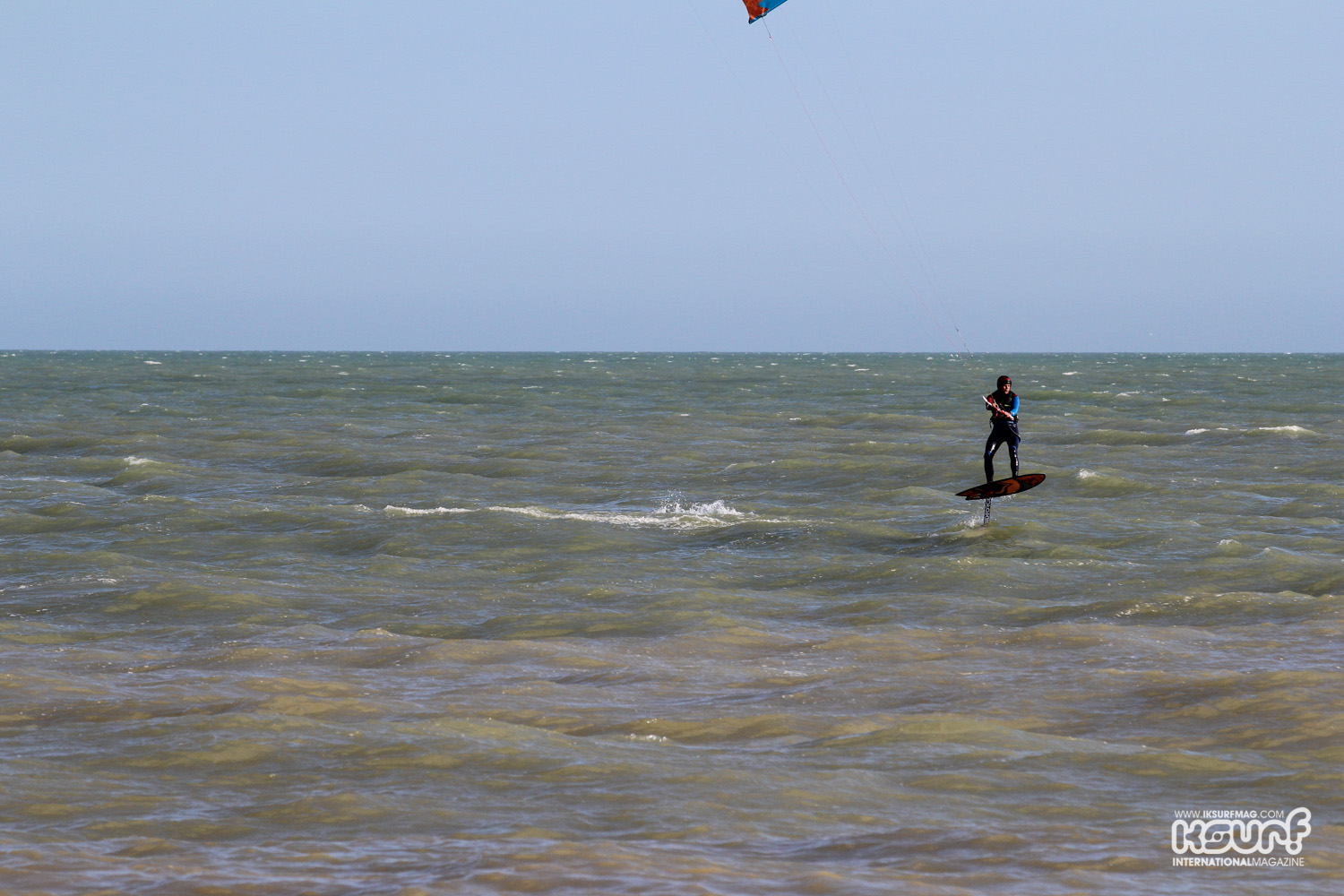 There were a few moments where it felt totally amazing, the silence, the sense of achievement…and the inevitable wipeout! Photo: Mary Booth

I found when the wind was stronger it was easier to get speed and to fly, when the wind dropped it was trickier to manage the power in the kite and the foil. So next time I’ll aim to have a little more power for my session and I might move the straps back to the middle position now I’m used to riding around with the board on the water. 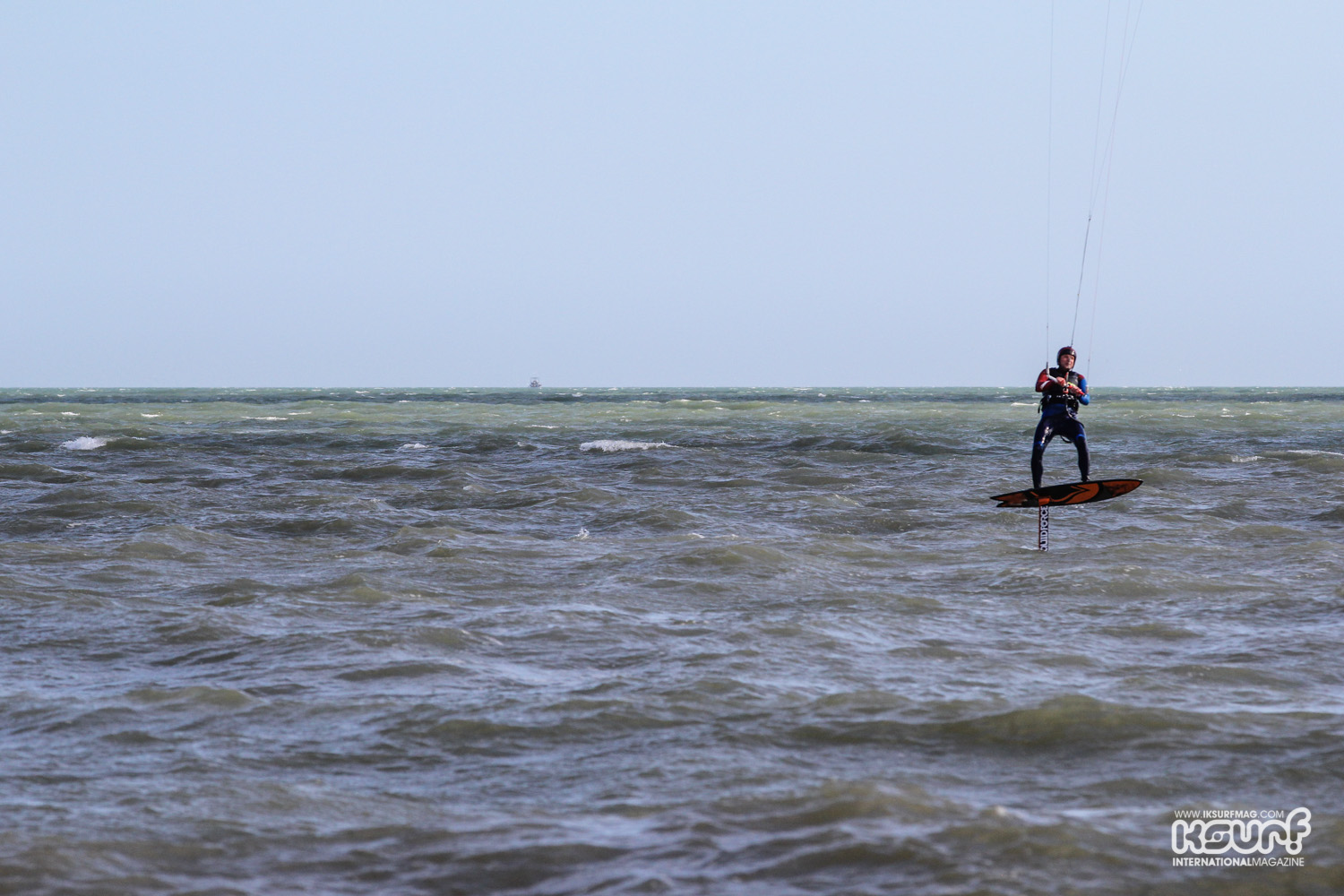 Getting the hang of this… Photo: Mary Booth

Just to ensure I felt like a total beginner at the end the wind lulled and I dropped the kite, couldn’t relaunch it and had swam in. Still, at least I stayed upwind this time, next goal is to have a session with a dry kite and at some point down the line I’ll be stoked to stick one whole leg in without crashing. I managed it a few times on port tack, but I was only doing short runs and staying close to the shore. 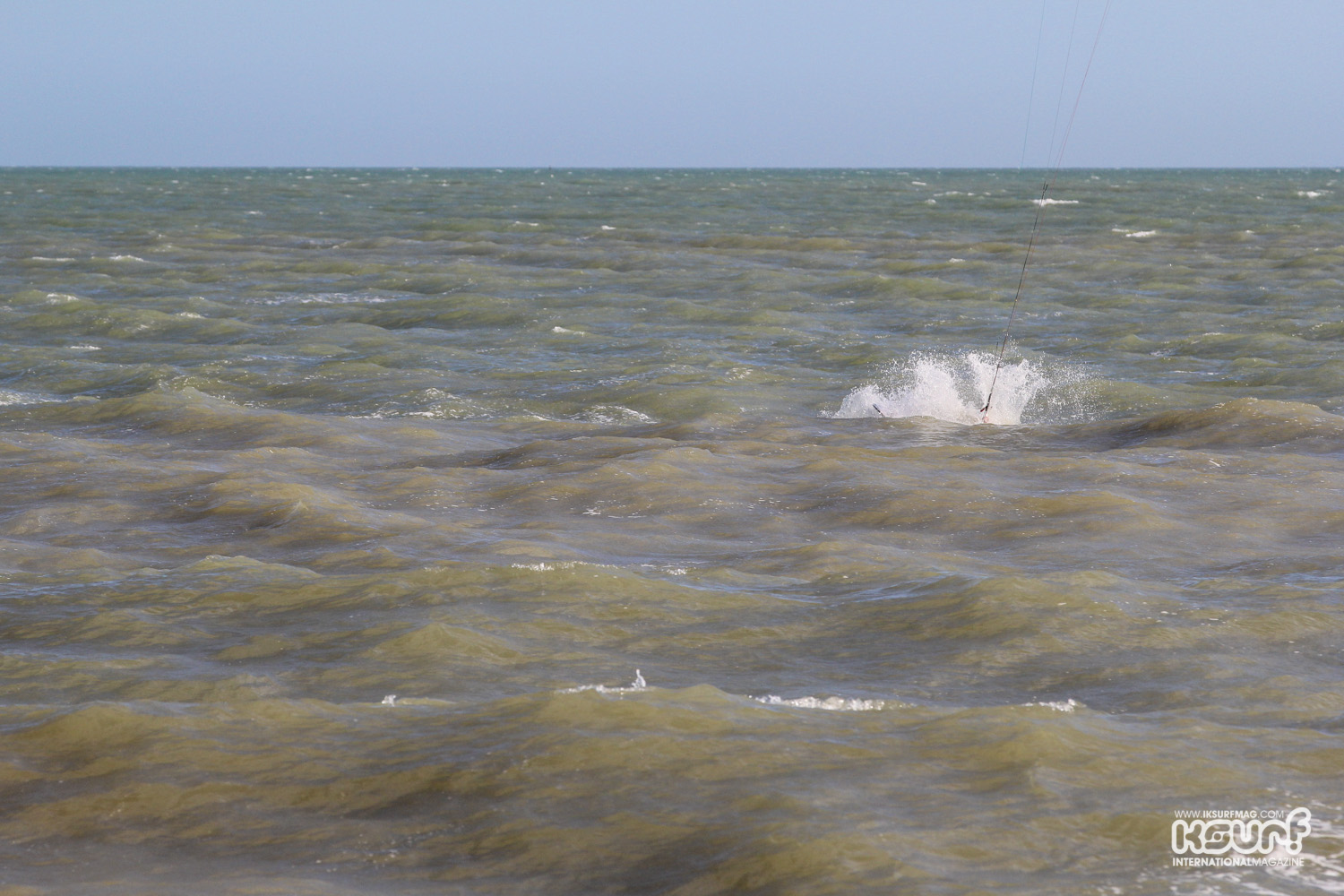 I swallowed so much sea water I now have a nose and throat infection… A good sign the water quality is top notch round these parts! Photo: Mary Booth

First impressions are good; I’m loving the learning process, enjoying analysing what I’m doing wrong and when, although I’m still a very long way off from looking any good. The Foil Fish has been pretty easy so far, it doesn’t feel too fast and seems relatively stable once I am up in the air, although this is my first ever session so I can’t equate it to anything else. I am, however, amazed that I seemed to be able to ride it after only a couple of hours, I’m sure the mastering of it will take far longer! 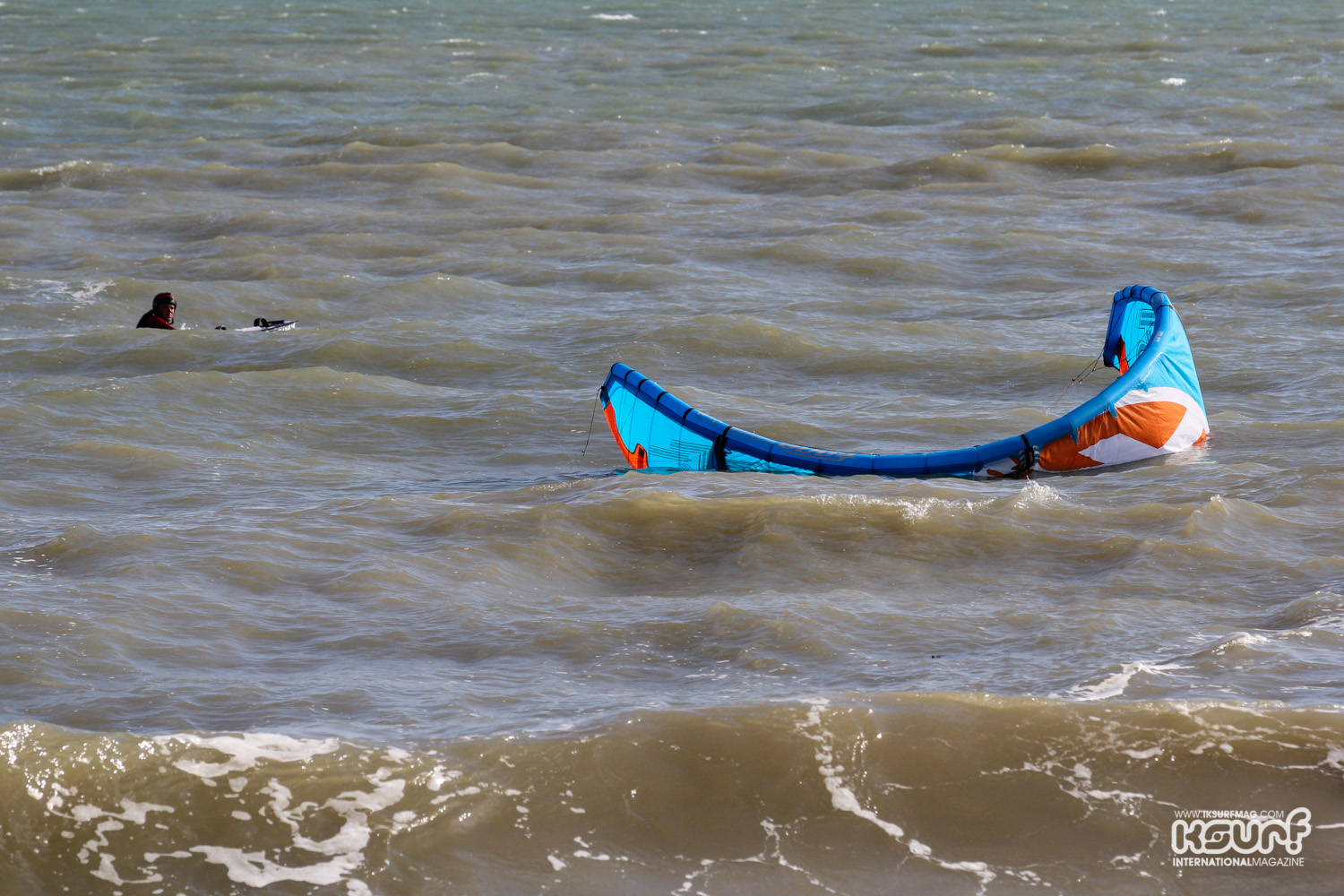 I’m two from two for swimming back to the beach at the moment! Photo: Mary Booth

Most of all I’m looking forward to session number three and I know it is only a matter of hours, lots and lots of hours, before I get it sussed, but the first two are out of the way and I have now travelled a grand total of 11 miles under foil power… I also have a newfound respect for the riders who are masters of this craft, it takes a level of skill and finesse that you can only appreciate once you have tried it. It’s like nothing else I’ve ridden with a kite, it’s totally different, but equally it is fantastic fun – I’m hooked! 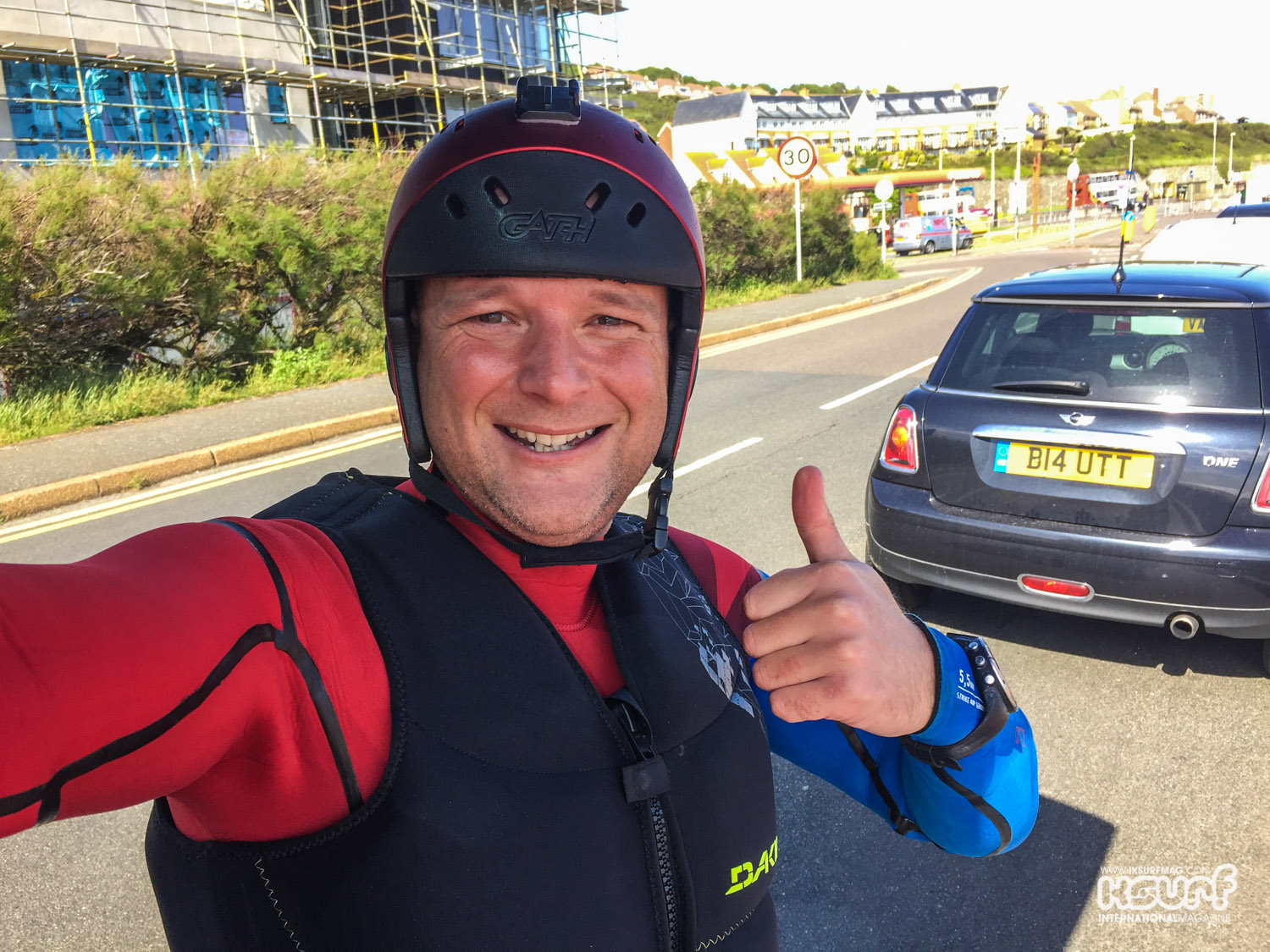 Whatever you do, dress appropriately, it hurts a lot more than normal kitesurfing and those wings are sharp…

I’ll let you know how the next session goes!