3 hours left: 20% off everything Shop

Big news and drama from the PKRA in Leucate, France today. Youri was beaten by a returning Aaron Hadlow, 3.5 years out of the scene didn’t seem to affect him as he stormed his way up the rankings to the final. Alex Pastor was on fire again, after showing early form in Morocco and beat Hadlow in the finals, the first guy to beat him in a heat in sometime, Aaron had a very good habit of never losing when he was last on the tour… 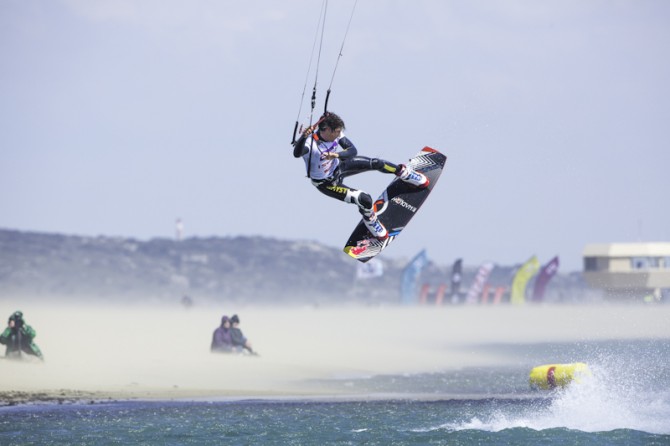 A return of the king! Photo: Toby Bromwich

“The second Day of the PKRA Worldtour “Mondial du Vent” in Laucate, France started with big show down.

5x World Champion Aaron Hadlow vs. current 2x World Champion Youri Zoon. Aaron showed that even after 3 years off and a knee reconstruction, he still has the desire and skills required to compete with the best Kiteboarders in the world. Both competitors showed us very technical and powered moves and it was one of the best heats of the day. In the end Aaron inched it with Youri by 0.7 Points. Alex Pastor went on to win the finals of the Single Elimination and be the only rider to beat  Aaron Hadlow all day long!

In the ladies heats it was Gisela Pulido who performed well in the tricky conditions, beating Karolina Winkowska who had been riding really well.

The wind was very strong, men and women were on 4-7 meter kites. The conditions were hard but the best kiter in the world put on a show for the masses.

The Top Riders showed they were still consistent and the single Elimination finished as follows:”

How To Downloop Safely Kitesurfing

Light wind KITEBOARDING tips! "How To"

What's new on the CORE GTS6? Why I love the MEGALOOP BEAST // SA Gear review

MANERA - Green Touch - Our Efforts For The Environment

2021 Mystic The One Wetsuit

Back To Big Air - World Of Whaley Episode #9