If you're looking for somewhere to kite all year round in Europe, it's undoubtedly the Canary Islands. A group of Spanish archipelago located in front of the Moroccan coast. Spring throughout the year attracts millions of tourist from all over Europe, especially those from colder climates.

Tenerife, one of the islands, is one of the most popular tourist destinations in the world, specifically for its spectacular volcanic scenery. As far as kitesurfing is concerned, it offers light wind condition and little waves or radical days with over 40 knots and two metres waves.

Strapless or twintip share a broad area that can be divided into three main sectors such as "el Muelle" suitable for wave-hunters, "la Bahia" for freeride and "el Rincon" at the bottom of the bay where you can go big as well as train unhooked.

The Canary Islands enjoy an exceptionally mild climate. Located on the Atlantic, just north of the tropic of cancer, a short distance from the African coasts of Morocco and Western Sahara, it is below the "trade-winds" called Aliseos, which are constant winds from the north-east around 25 knots.

The island of Tenerife is very well connected with the rest of Europe through its two airports and multiple seaports, giving the possibility of being reached from almost all of Europe with direct flights.

Once on the island, the central spot for kitesurfing, El Medano, is just 5 minutes away from the Tenerife south airports.
A rental car is the best solution if you want to get around and visit the island, but even buses and taxi are easily accessible. It's also possible to move between the islands with internal flights and ferries.

El Medano has a variety of restaurants in town that offer tapas and beers for the majority of the day, and at night you can choose between Italian, Spanish, Canary and many others. Our locals fishing town has the best fresh fish ever!

El Medano is pretty active during the daytime and less at night, but there are a few pubs where you can spend the night listening to live music or having some drink somewhere! If you are looking for a proper party, you can reach the close town of Las Americas which hosts some of the best parties and nightlife

If you're unlucky and do not to find wind during your holidays in Tenerife, do not despair, you can explore the whole islands other adventures on quads, trekking routes, climbing, mountain biking or surfing.

Several surf spots are depending on the direction of the swell or at calm sea; you can go diving and explore Tenerife marine life!

An island with 15 different microclimates, just waiting to be discovered!

All the islands have an adequate internet connection

El Medano has been a destination for watersports lovers for decades. From hotels to hostels to independents apartments, depending on the season you choose, prices can vary, but more or less will always remain affordable for most people.

I recommend organising some time in advance to secure an apartment in the small town of El Medano or sea view just behind the kiteboarding spot.

Matchu Lopes testing out the waters

Getting some loops in!

Kicking off the waves

Search for Flights to (TFS)

Barbados offers conditions ideal for all water sports lovers. Consistently howling trade winds with beautiful, warm turquoise water and clean waves make it a playground for kitesurfers, stand-up paddle boarders, surfers, sailors, scuba divers and freedivers. Regardless of your kiteboarding style, Barbados offers conditions for all, from freestyle, freeriding and wave riding. Many visitors get hooked on the island because…

The San Blas are 367 deserted islands located on the Caribbean side of Panama. The local Kuna Tribes inhabit only 10% of the islands. White sandy beaches and crystal clear blue waters are waiting for you! Have a rest under one of the shady palm trees after an excellent kite session and get to know the locals and their unique…

The Belgian coastline (North sea) is only 60km long and consists of sandy beaches - no cliffs, rocks, or reef. There are over 15 spots all spread out along the coastline, so no matter where you are, there’s always a spot to kitesurf nearby. Even though the coastline is full of buildings, there are beautiful sandy beaches. Some of the…

Nik moved to El Medano in Tenerife 5 years ago searching for wind! He’s been kitesurfing since 2013. Nik works at a local shop Wet Watersports and is always up for a session!

Been to Tenerife? What did you think?

Where are the Best Kitesurfing Beaches in Tenerife? 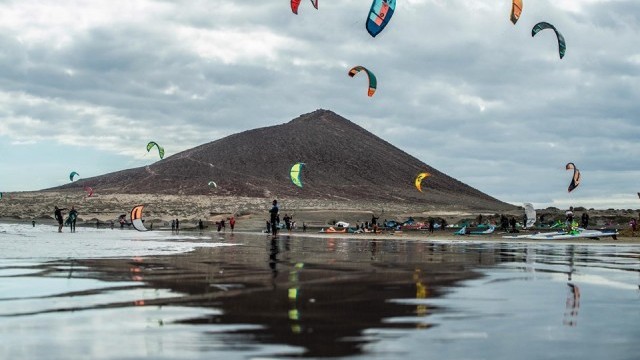 Playa Sur is the most popular spot and enjoys a good mix of flatter water and waves. When it gets windy, it can get choppy on the inside.

When is the Best Time to go Kitesurfing in Tenerife?

Search for Flights to (TFS)

The best photos with nowhere else to go!

More incredible images with no place to call home, check them out!

Kitesurfing Videos and News in Tenerife

Kids these days! Watch Jeremy Burlando and the crew session at a 'secret' spot in Tenerife.