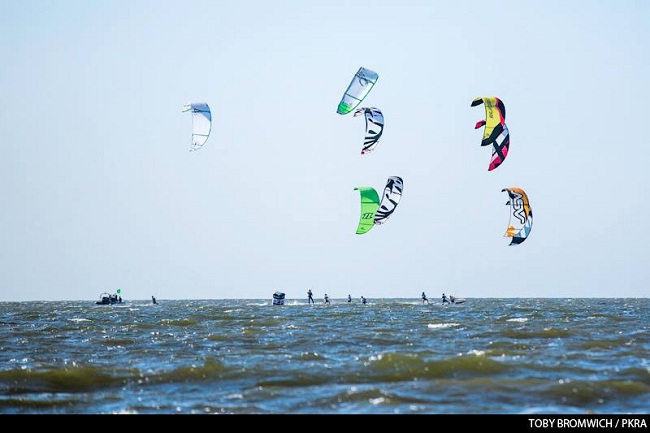 Bryan Lake regains the lead in slalom racing at the beetle kite surf World Cup in Saint Peter Ording Germany. Thousands of spectators came to the beaches of Saint Peter Ording to enjoy the kitesurf World Cup, the slalom racing, meeting the pros, testing kites and enjoying a beautiful day. The racing got underway at 16:30 with the thermal wind building all the way to 13 knots.  The water was pretty flat and the two mark course was very fast.  Bryan dominated the day by winning two races, Kerneur lost the top spot and Gruber solidified his 3rd place.

At the 11 o’clock skippers meeting, the freestylers gathered with the PKRA judges and crew to discuss the judging format and how to improve it for the future. The riders discussed structuring the trials for the 2014 season, discussed with the judges potential scores with video analysis of tricks and the possible return of switch tricks being given more weight in scoring.  These meetings are a key factor in continuing to develop freestyle with the vision of the riders. 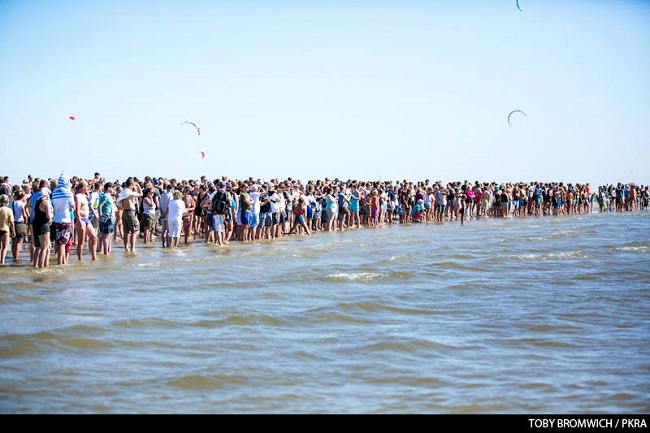 After a few volleyball games it was time to start racing. The wind was around 11 to 13 kn and kites between 13 and 19 m were used on the course.  In the first women’s final Boenniger was in front from the start and won race 8, Sysoeva was 2nd and Bremer third when lutz was unable to finish the race, while riding too close to the beach.  The men’s first final Bryan Lake came out full speed knowing that he needed to win to move in front of Kerneur.  He stayed in front the whole race and was never challenged.  The surprise finisher was Romain Castel in second; Smith also had a great 3rd place finished and got closer to the podium in the overall rankings.

The next two races Boenniger kept on winning and won her 10th straight race.  Sysoeva also got three second places to move well into second.  Lutz guaranteed herself a podium spot in her first slalom event on the PKRA after coming 3rd on race 9 and 10.  Boenniger was perfect thoughout the entire event; always being in front at the first mark and finish line. 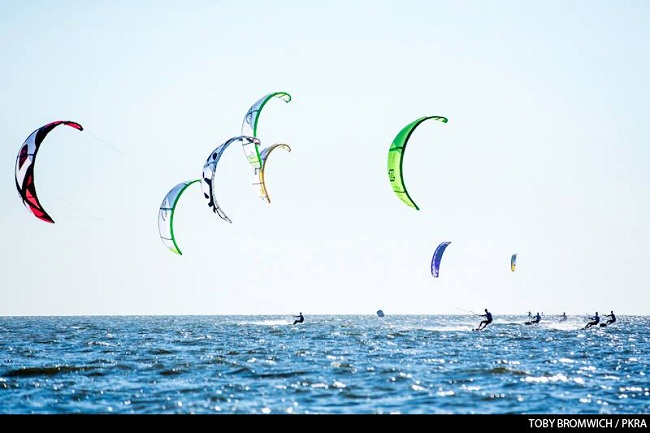 In the final of the second race of the day Kerneur needed a win to get even with Bryan and keep his chances at winning the event.  The two fought hard up front but Lake’s speed kept Julien at bay and Bryan was a full two wins ahead of Kerneur  at the end of the race.  Baumeister had some great speed on his 14m and finished 3rd.
The last race of the day was extremely exciting with Bryan coming in for the win and crashing just before the finish line.  This opened the door for Gruber who won his first race. Baumeister was second and Marcis got his first podium of the week in 3rd. 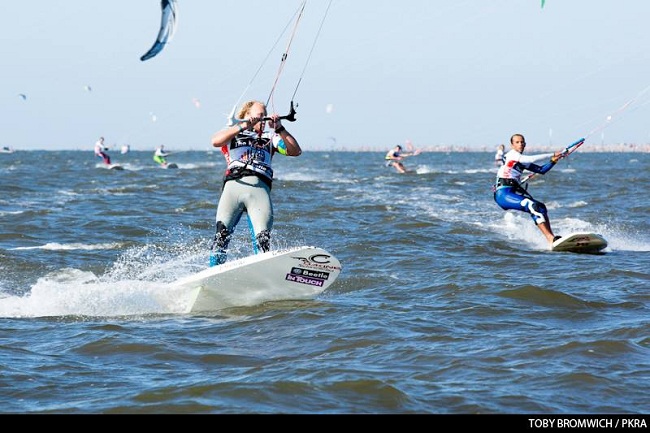 The racing conditions were ideal, the course was fast and let the racers reach their top speeds.  Today the fastest racers had an advantage over the ones that are fast around the marks.  Lake is now well in the lead and will be hard to dethrone tomorrow when racing resumes.  Boenniger seems untouchable.  The thousands of spectators that came out really made the day special for the racers, having thousands of spectators following their every movement.  With more sun forecasted for the last day of the event, Sunday at the beach in Germany will be delight. Follow us on Facebook and Twitter for the latest news and information.