The Olympic Hangover Kicks In…

You know how it is with hangovers, they tend to get worse! And with the heady joys of our excellent sport being drafted into the Olympics, when the reality kicked in things were bound to look a little fuzzy! Firstly I will say these views are totally my own and not the views of the mag as a whole, I’m writing this as a personal blog with my thoughts on what has happened over the last couple of months.

We all remember the day it happened, Saturday the 5th of May will be revered in kitesurfings history, as long as things don’t change at the next vote in November, which personally I think is unlikely. After all the last thing ISAF want to do is look like they made a mistake by getting kitesurfing into the Olympics over windsurfing. In this journalists eyes however, maybe they did. Firstly there is the plight of the windsurfers to consider, for years they have been training for this pinnacle of achievement, only to have the rug swept out from under them. Thats not to say that I don’t think the RS:X class was right for the Olympics, it wasn’t, in such a fast paced sport as windsurfing limiting it to a One Design class was the first of many nails in the coffin. All to often the greatest races in the world were fought out on some of the oldest most outdated kit around. OK so RS:X was a little better than the IMCO and Windsurfer classes, and closer to what windsurfing is really about today, but if you weren’t on the Olympic program you simply didn’t ride an RS:X board. And in that respect was windsurfing ever really in the Olympics, or was it just another sailing class that the average windsurfer couldn’t really relate to. 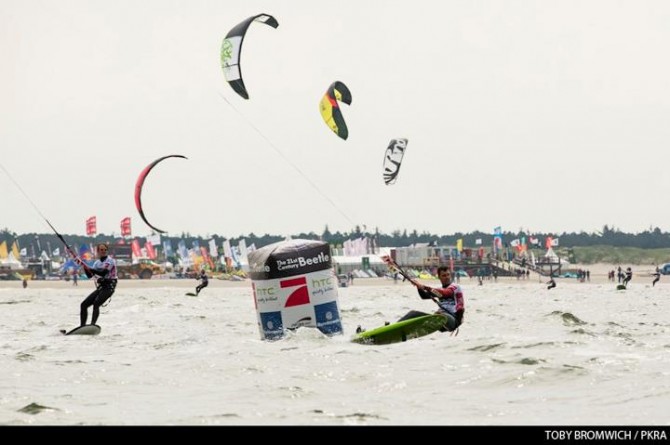 Kite racing, definitely doesn't look like the RS:X class to me!

The trouble is, in the UK at least, the RYA has spent a small fortune on training and developing the youth and adult RS:X teams for the mens and womens medals. Were they really about to ditch all those athletes, hopefuls, coaches and trainers and hire a bunch of kitesurfers to take over the roles? No, of course not. They simply went out and paid good money on equipment for their RS:X team to learn to kite race on.  And thats a rather sad fact, they are windsurfers, not kiters, they love windsurfing and want to windsurf. And yet because of ISAF they are being forced to learn a sport they have little interest in. For the kiters who have spent thousands of pounds on gear and travel to attend the race seen in the UK over the last 5 years it is a bit of an insult. We have a very high standard here in the UK with 6 or 7 riders all jostling for the number 1 spot on the race course, all at a very fast pace and with complete commitment to the cause. Consider that Steph Bridge is among that group and the 4 times World Champion who regulalry places top ten in the mens fleet, as well as her son Olly who has placed top 5 at international level and you get an idea of how good the top guys in the UK are.

Most of them have a racing background, they have all been kitesurfing for years, kite racing since it started and totally in love with the discipline. They are already at an international standard and with the right funding and support could easily be vying for medals in Rio, Steph and Olly especially. It seems strange that the RYA hasn’t spent a penny on any of their equipment, or travel plans to the forthcoming World Championships, yet the RS:X team have all new Ozone Edge kites and North boards and flights and accommodation for Sardina at the worlds already paid for… You can’t help but wonder if windsurfing was still in the Olympics that things might be just a little bit different! 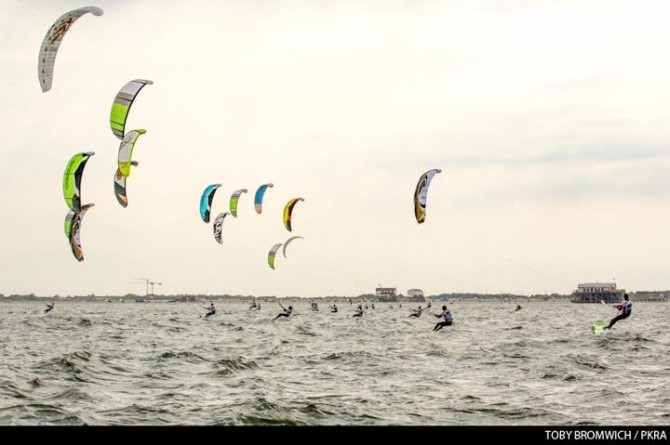 If windsurfing was still in the Olympics, things for the kite racers would be very different!

And that brings me on to the Sardinia World Champs, I registered for the event as soon as it became available, and will be spending a fair chunk of my own money to get there and race. I love racing, and have been doing it for years in various dinghies and yachts. I love the tactics of the start line, the upwind leg and the downwind run, tacking in the windshifts and the ultimate game of chess that a race is. I love the long regattas where you’re constantly working out the points on the racecourse of the other sailors and boats so you know where you stand in the overall standings. So much racing is done off the race course it is untrue, and unless you truly understand and love racing then all this will be lost on you. When people ask me what is kite racing I always say the same thing, it’s the same as yacht or dinghy racing except it is much faster and more 3 dimensional. We have start lines, triangular courses, upwind, downwind, the same rules, oh and we can do 25knots in 8 knots of wind… It’s usually a surprise, they assume it will be some sideshow with jumps and obstacles, and not include any of the tactics, courses and rules they are used to.

Imagine our surprise then that after 7 years of developing raceboards, fins and kites to go very fast around an upwind and downwind traditional sailing course that the decision was made to run what is essentially a Box Slalom course at the World Championships in Sardinia. Just about every kite racer is up in arms, we’ve been training all year, made lots of personal sacrifices, invested loads of time and money into the sport we love and now it has all changed? And why have they changed it? 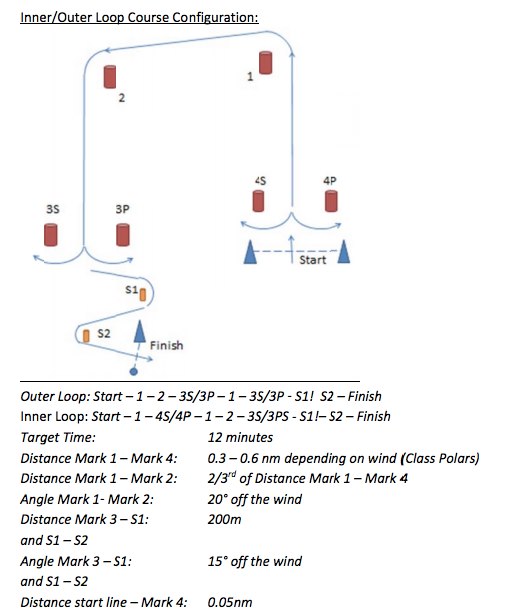 The new course isn't confusing at all, or difficult to set correctly, providing you have 10 marks to play with!

ISAF has been pressured by the IOC to make it a visual spectacular that is good for the TV companies and spectators. And to be fair that is a valid point, but surely a box slalom isn’t racing in the traditional sense? It certainly isn’t the reason we all got into the sport! Apparently the decision isn’t final, but with ISAF being lobbied by the IOC, the opinions of the racers are largely falling on deaf ears. The new course requires 10 marks to race round, thats a hell of an investment, and a serious course to set right and frankly way out of reach of most sailing clubs in the UK. Our own governing body the BKSA has just 5 marks for kitesurf racing. So the chances of practicing the new course are slim to non before the World Champs. The new course also removes the large and long tactical upwind leg that so many races are won and lost on. And to add insult to injury the new racing format has a “play offs” at the end that could see the guy in second, third or fourth winning the gold medal despite not being the best racer over the course of a week long regatta… So suddenly the off the water racing aspect of working out who is where and what you need to do, alongside looking after your equipment and ensuring you are consistent is gone.

Perhaps the biggest shame is the equipment won’t have been designed for this type of course, our boards are made to go upwind fast, and that element will be removed in this new format. So we need to redesign the gear to enable it to perform the best on the course. Sadly the timeframe isn’t there to facilitate that, so the best we can do is adjust our fin choice accordingly and hope for the best. In the past the race boards have in my eyes been the Formula 1 in terms of development for the sport, they are designed for the job in hand, it is up to the rider to be able to develop the skills to ride them! Thats been the appeal to me, taming these boards that ride so fast and efficiently upwind, making them work downwind at high speeds and enjoying the huge buzz you get from it. Looking at the new course the boards will be totally over engineered for a non existant upwind leg, and need redesigning. Surely the time to change a course and format is after the Worlds and over the winter, allowing all the riders and designers to get to grips with the new format. Not throw away the years of hard work, training and development at the whim of ISAF? After all the new format, in my eyes isn’t kite racing as I know it, and it certainly isn’t racing in the traditional sense. So next time i get asked in the yacht club what kite racing is, I’ll tell them it’s some crazy box slalom course with 10 marks and not much in the way of tactics, just hope the guy in front crashes and you might win. Hell while we are at it lets chuck some inflatables in the the way and make it a boarder cross!

This new format will no doubt be great for the Olympics and for kitesurfing, the exposure has already done so much for the sport, but I can’t help but think it isn’t going to be great for kite racing as we all know and love it. And with that the Olympic hangover is a pounding beast that is lingering long into the afternoon, in fact the only way to shift it might be to have a another beer and forget the whole thing!

KTE Holland - Lightwind racing shows what it can do!

Chicken of the Sea