Park features don’t build themselves; building and maintaining a proper kite park takes time and resources. In order to sustain and improve the planet’s only public, free-floating kite park, the Slider Project needs your help. Organizers have launched an Indie GoGo campaign in an effort to fund a new kicker, a beginner-friendly slider, and to cover yearly maintenance of the park. Check out the video and details about the Indie GoGo campaign learn more! 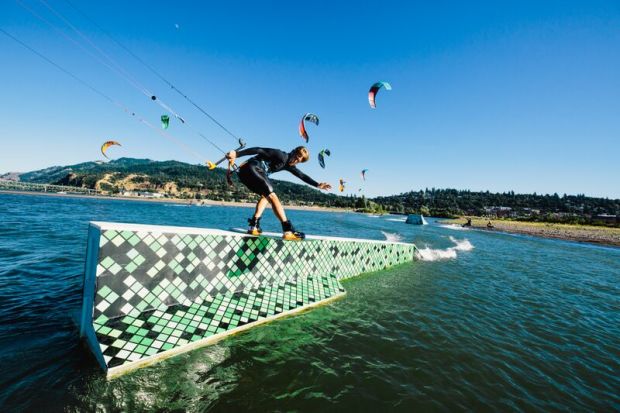 Brandon crushes features, but he’s also a champion at volunteering his time to maintain the park.

A kiteboarding park is no different than a terrain park at a ski resort … other than the fact that there is no snow, no skiers and no firm ground to actually build something into. In a kiteboarding park, rideable features need to float while being firmly anchored in place, and they need to withstand winds of up to 50mph.

A problem specific to our park is that we are located in a river, which has constantly changing water levels and current.   It’s a tricky task, but practice makes perfect.  Over the years, we have developed a methodology for slider construction and management which has helped us develop one of the best (and only) kiteboarding parks in the world. With your help, we aim to raise $10,000 to construct a new feature for our park.  Any additional funding will go toward repairs, renovations, and food for all the volunteers who make this park possible! 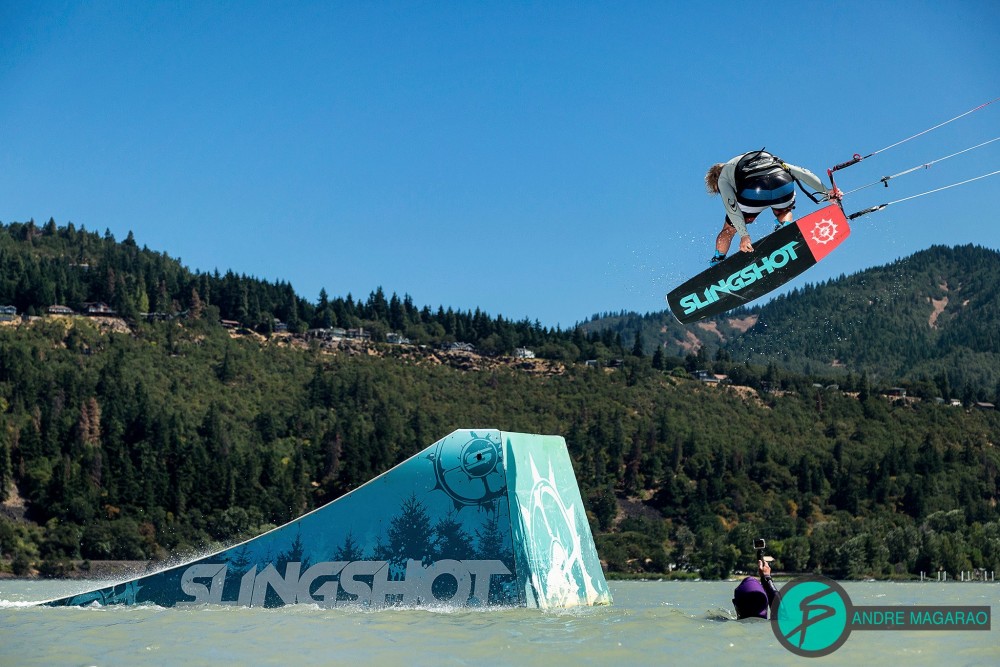 The pro’s and the general pubic are looking to build a smaller kicker to complement this monster booter.

Currently, we have 3 features that we manage: The Liquid Force Dance Floor, The Slingshot Kicker, and the North Rooftop Rail.  The structure of the organization has also shifted from that of a for-profit business to that of a not for profit LLC that is managed, “by the community, for the community”.   There are many people who make up the Slider Project and we all view it as our community service, to give back to a place that has given us so much.  We love teaching people how to ride our features because we get them hooked and eventually part of the movement.   All riders are welcome in the park and that is the ethos of The Slider Park.   At the end of the day, we are about sharing our stoke with the world and we couldn’t find a better outlet to do that than The Slider Project.

Kiteboarding is a relatively new sport that is constantly changing in focus. The current world tour for kiteboarding holds contests in course racing, big air, freestyle and speed trials. Over the past couple years, a new side of the sport, park riding, has emerged and gained tons of notoriety.  Ten years ago, REAL Watersports in Cape Hatteras, NC began to legitimize this side of the sport by creating a contest called the Triple S Invitational. It was founded by riders who wanted to bring the aspect of feature riding into the public’s eye.  After 10 years of successful events,  The Triple S Invitational is currently the largest freestyle kiteboarding contest in the United States.

The event also inspired a slider-dedicated kiteboarding event in Hood River called the Ro Sham Throw Down.  It was open to everyone and attracted the very same riders that were invited to the Triple S.  It also provided an opportunity for international riders to complete their trip to the United States by traveling from Cape Hatteras to Hood River. This year we resurrected this idea with an event called the Hood River Slider Jam. It is our hope that we can expand the park to facilitate an event of similar size as the Triple S Invitational, and complete a small American Kiteboarding tour. 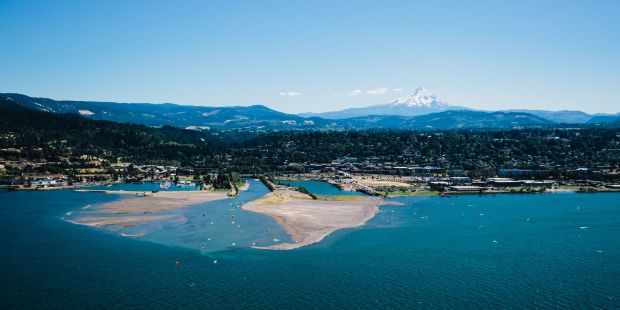 Nature carved out a perfectly protected pocket for the Hood River Slider Park.

There are few spots that are as perfectly set up for a kiteboarding park as Hood River, OR.  With constant west winds all summer and a giant sandbar created by the outflow of the Hood River, nature has provided the ultimate spot for a kiteboarding park.   There are also not many spots that will actually allow a free standing kite park that is open to the public.  The Port of Hood River operates with a great sense of community and has permitted The Slider Project to have these features accessible for all those who want to enjoy them.

What We Need & What You Get
The Slider Project is in need of your help. Over the years, we have learned a lot about feature building and management.  With development in slider construction technologies, some of the older features in our park have become dangerous and outdated, so we are looking to replace and/or update them.  We want to make features that are accessible to all, easy to manage, and will endure for years to come.  Our plan is to raise enough money to build a new, smaller kicker, dedicated to bringing new people into feature riding.  Our present kicker is massive.  It’s fun for those who are extremely talented, but intimidating for those just looking to get a taste of feature riding. With your help, we are going to build a kicker that is about half the size and perfect for those wanting to get airborne for their first time. Joby Cook at Jibstruction has proposed the new Kicker take on the following shape: 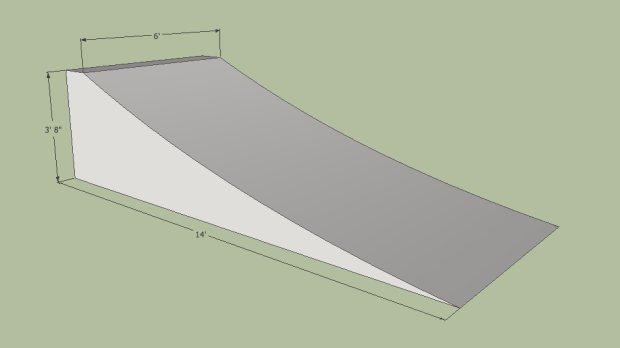 Blueprint for the proposed intro-kicker.

The Impact
The Slider Project is a small operation, run by only a few passionate people who are willing to put their spare time in to make sure others can enjoy the park. Any support you give goes a long way to helping support this community of people.  To get an idea of the impact you would have, check out our video at the top of this page.   We spent a lot of time making it and it will surely blow your mind. Yup, we stand by that.  It’s that good. Ian Daly donated his time and services to put the whole thing together. He also came up with our new logo. Red Tide Pictures filmed all of our interviews, Lance Koudele donated the drone footage, and riders from all around the world contributed clips to make it happen. See how many people made it happen?  How is it not worth a watch?

Risks & Challenges
The Slider Project is a community organization that relies solely on passionate people for success.  When a slider needs to be moved, there is no jet ski or boat that helps.  It is the sweat straight from the average kiteboarders back that makes it all possible.  We pull out the sliders every winter, store them on the beach, and then slide them back into position at the beginning of the season.

By donating to this fundraiser, you will be part of the kiteboarding community here in Hood River.  Every dollar you spend will go towards:
– Maintenance for the park (welding, wood, nails, screws, etc)
– Food and Beverage for Work Parties
– Future events, such as the Hood River Slider Jam 2016
– Keeping our wallet from drying up as we keep the park accessible to everyone!

Other Ways You Can Help
If you can’t help out monetarily, there are still plenty of other ways to support.
– Like “The Slider Project” Facebook Page so as to stay updated on what is going on.
– Share this campaign!  Maybe you know someone who is incredibly passionate about this side of the sport, or someone who is always down to help, or maybe just someone with way too much money! 😉
– Visit thesliderproject.us

3 Ways to do a Frontroll | Classic, Send and Inverted // SA Masterclass

What is Red Bull King Of The Air ? - KOTA 2021 Action Highlights