Thats the end of the PKRA in Holland, what a fantastic event, congratulations to the winners and well done to all the competitors for making the effort…

Day six of the O’Neill Kiteboard World Cup began as one of the most promising days so far, with significant breeze and suitable freestyle conditions. Blowing at 15-17 knots from the NNE direction, Kevin Langeree (NED) and Ewan Jaspan (AUS) took center stage in front of the judges, throwing down the best maneuvers and most impressive tricks they could showcase.  Langeree advanced in this round, ultimately setting the pace for the following heats. The low tide sometimes proved to be difficult, as several riders landed tricks on the beach, rather than the water. Liam Whaley (ESP) also moved forward early on with an impressive Front Mobe, while Carlos Madson (BRA) competed a nice S-7. Sholte, a hometown favorite, put up just as much of a fight with a quality Blind Judge, among other well placed moves. 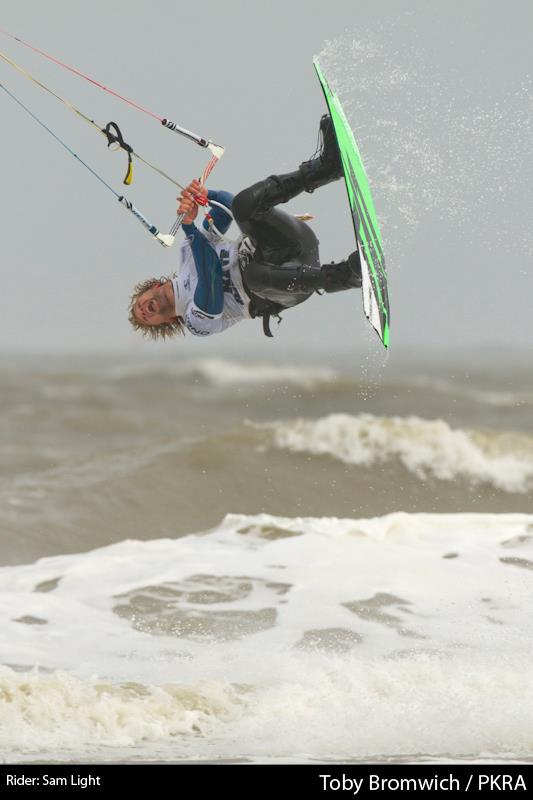 As winds continued to hold, Sebastian Garat (FRA) and Alex Soto (DR) advanced in the early heats. Soto advanced in his face-off against Sam Light (UK); however, Light received much praise on the beach for his stylish S-Bend to Blind. 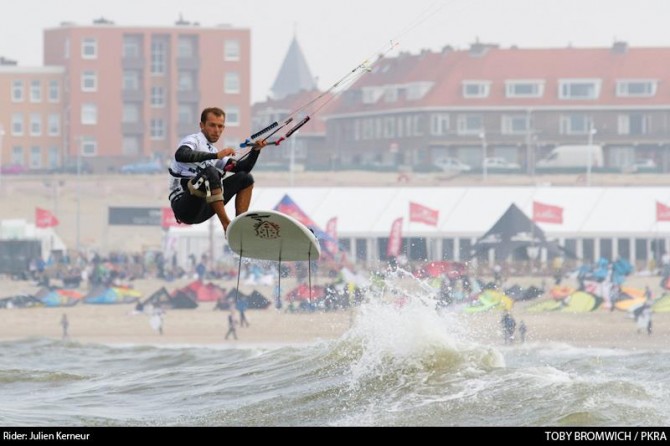 By heat #41, winds began to decrease as Garat and Marc Jacobs (NZ) tried their hardest to perform in the heavy current and light wind. This heat was soon cancelled once both competitors exited the water to run upwind.  Interestingly, the highest score of the day went to Kevin Langeree for a Late Back Mobe, earning the total highest score in his first heat of 44.57. Unfortunately, the winds never increased enough to allow for further freestyle heats. As a result, the final rankings of the single eliminations held for this event.

The wind, was however, good enough for racing, and with the positive energy on the beach only building, the breeze held on to provide racers the perfect opportunity for the next competition. The sixth race of the O’Neill Kiteboard World Cup commenced in 11-14 knots of wind at 1:45. Starting on a downwind tack upon crossing the starting line, racers cut up into the wind – the best men in the sport engaging in a fight to the end. All but one competitor started on starboard, the packed fleet led by Adam Koch (USA), Riccardo Leccese (COL), and Olivier Dansin (FRA). 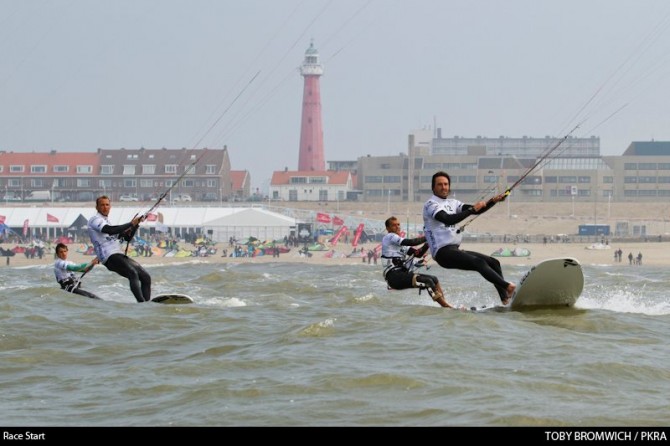 Shortly into the beginning of the race, Koch broke further upwind than Leccese, while Kerneur took an early first tack, hoping to gain ground towards the upwind buoy. For Kerneur, this strategy did not quite work out as planned, as he was forced to tack again to make his first mark. After this point, the fleet began to spread out, Lake moving into the lead, with Koch second and Leccese third.

The eventual downwind tack stood out as an amazingly close stretch, – the top three racers at each other’s heels. Attempting to gain on the leading competitors, Rolf Van Der Vlugt, Julien Kerneur, and Olivier Dansin raced close together as well.  At this moment, tactical sailing was at its best as racers maneuvered with all of their mental and physical might. Katja Roose (NED) also stayed in perfect placement throughout the race, ahead of numerous male competitors and, as usual, earning much respect on the course. The other women did well in this race also, with strong sailing and well-thought out approaches.

Finally, in the last minutes of the race – heavy fog overhead – Koch made the cleanest lay line, gaining an even greater lead. Onlookers held their breath as Koch pushed through the finish line, followed by Leccese and Lake.

The seventh race started soon after, the racers this time reaching upwind towards their mark on a shorter course. Kerneur and Lake initially took noticeably different lines from the rest, while the others held similar paths. Pushing forward in the first minutes were Koch, Leccese, Lake, and Dansin. The rest of the fleet flowed with the pack, making both slight movements and major line changes throughout the duration. The last moments of the race proved to be incredibly eventful, as Koch rounded his mark first – Lake close behind. Leccese, on the other hand, found his kite in the water after flying it low and trying to gain speed, which caused him to fall back significantly, allowing Kerneur and Dansin to edge up in the rankings.  The final results of this race were Koch, Lake, and Kerneur in the first three positions. (Final race rankings may be viewed below).

Overall the O’Neill Kiteboard World Cup proved to be an amazing event. With all the excitement of big freestyle action coupled with amazing racing performances, the PKRA’s fourth official tour stop of the year finished with great result. In the evening, the top competitors accepted their awards, exuding much appreciation and pride. 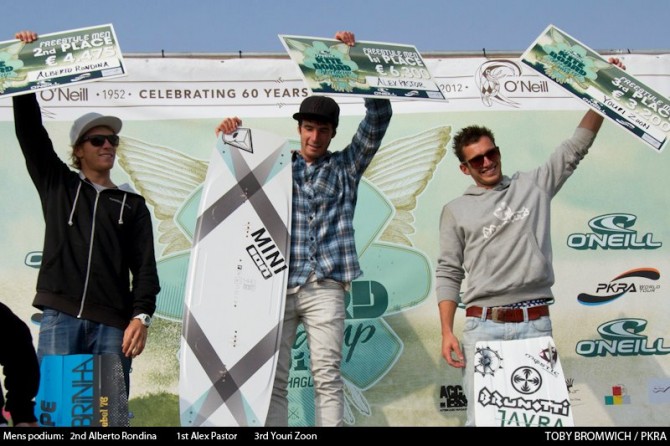 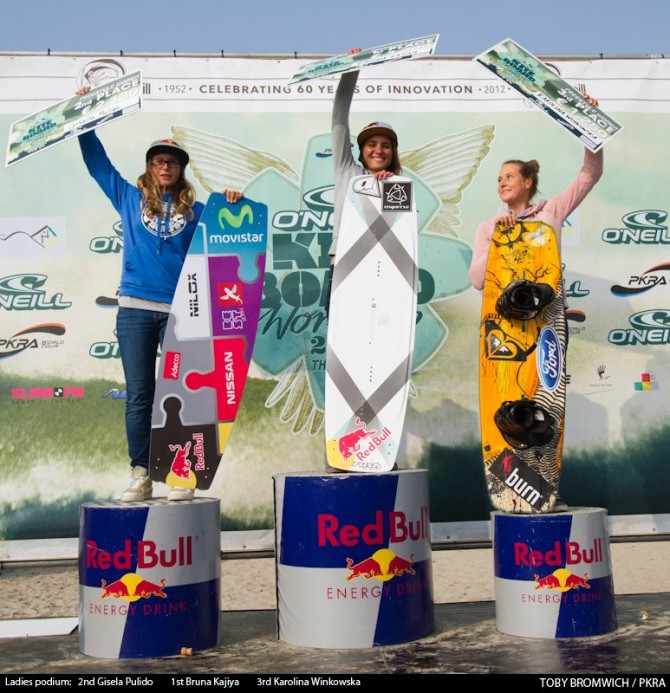 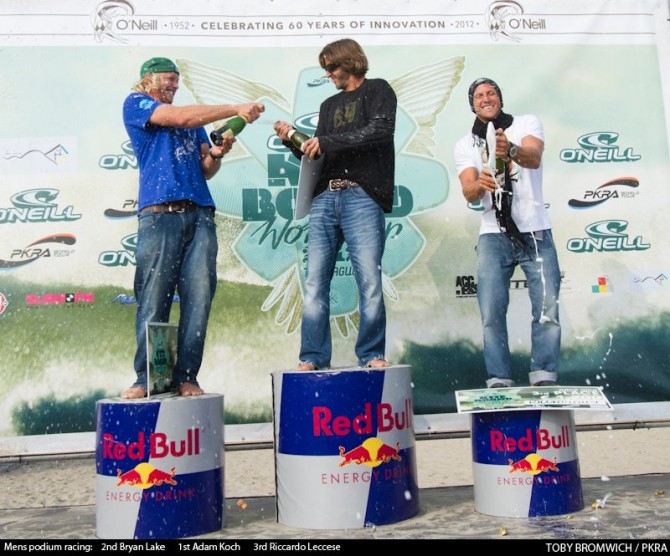 PKRA St Peter-Ording Wrap Up, Plus the Double Eliminations Movie

Final Movie from the O'Neill PKRA World Cup in Holland

I Kitesurfed Unhooked Without Leash