In Israel, there's the saying: “You go to Haifa to work, to Jerusalem to learn, and to Tel Aviv to play”. So get ready to play when you visit this beautiful city, located on the coast of the Mediterranean Sea. The “White City” is famous for its white Bauhaus buildings and its great nightlife. If you walk through the quarter of Old Jaffa, you take a walk through history. Napoleon has been to the city, just like Saint Peter and Perseus who fought the monster of Ketos at sea to save the daughter of Cassiopeia.

It's worth coming to Tel Aviv just for that, but you should bring your kitesurfing gear, as it's a pretty good place to go kiting, too. You are allowed to go kiting right at the city beach of Tel Aviv. During winter you'll find strong winds up to 30 knots with waves up to two or three metres. In spring and autumn, Tel Aviv changes completely, giving you nice and flat water with comfortable 15 or 20 knots average. In summer, you are not allowed to go kitesurfing here, but the wind wouldn't be consistent enough anyway. The kitesurf community in Tel Aviv is pretty close-knit, most of the kiters know each other; however, they are still very welcoming to newbies and help you whenever they can.

Summers are hot in Tel Aviv, but even the cold season cannot be compared to winter in Europe. During winter, you'll often have sunny days with 20 degrees; sometimes it gets rainy and a bit colder. You need a wetsuit in winter. In spring, autumn and summer you can usually go kitesurfing in boardshorts or a bikini.

In winter the wind comes from the South or West and brings waves of two or three metres. The waves are often pretty good, which explains why there are also many surfers in Tel Aviv. The waves get bigger the further you go up on the coast of Israel: They are bigger in Beit Yanai than in Tel Aviv and even bigger in Haifa.

During spring and autumn, the wind comes from the north, and the water is flat, perfect for beginners, freestyle or wakestyle tricks.

During the summer months July and August you're not allowed to go kitesurfing in Tel Aviv, most of the kitesurfers head to Eilat or the sea of Galilee – the perfect place to do the “Jesus walk” by the way. The wind is not very consistent in Tel Aviv during the summer.

From April till June and also in September and October you are not allowed to go kitesurfing in Tel Aviv during Fridays, Saturdays and on holidays. In July and August, kitesurfing is forbidden. From November till March there are no restrictions.

At the kite beach Beit Yanai there are no restrictions throughout the whole year.

You can go kitesurfing in Tel Aviv right at the city's beach, which you can conveniently reach by bus or foot – depending on where you stay. You don't necessarily need a car in Tel Aviv. Public transport is relatively cheap in the White City, and bus connections are very good. Even if you want to go to the kite beach Beit Yanai, 40 kilometres north of Tel Aviv, you can get there by bus. The ticket is only 19 shekels (around 5 US Dollars), and the busses 852 or 872 take you directly to Beit Yanai. Just make sure to tell the driver where you want to get off. Otherwise, he might pass your stop.

Great For Surfers Too

The local food in Israel is fantastic. In the morning you should try the typical breakfast Shakshuka, made of vegetables and egg, served with fresh bread and sauces. An excellent place to get traditional Israeli breakfast is Atlanta (Dizengoff 190), but there are plenty more. Israel is also famous for its hummus and falafel. You'll find the best and even the cheapest falafel at Ratzon Falafel (King George St 17). To dine right next to the sea, Mantaray (at the beachfront, Yehezkel Kaufmann Street 703) or the Old man and the Sea (in Jaffa harbour) are your go-to places.

If you'd like to try one of the best cocktails in town, you should head to Imperial Cocktail Bar (Inside the Imperial Hotel, Hayarkon 66), but don't expect low prices there. There are so many bars in Tel Aviv; you can stroll through the city, get lost in the streets and discover new bars and restaurants.

Tel Aviv is famous for its nightlife! You can party on any day of the week – even on Shabbat. You'll find many great bars, pubs and nightclubs around Rothschild Boulevard, in Florentine or Neve Tzedek. You can go to bars in the evening, but the party doesn't start before midnight or even 1 am. Be sure to take enough money with you, as clubs usually have an entrance fee and drinks aren't cheap either. The average price for a beer would be around 30 shekels (7,5 US Dollars).

Playing Amongst The Waves

If you want to blend in the White City's nightlife, you should know the song Tel Aviv by Omer Adam by heart – or at least the refrain “Tel Aviv, Ya Habibi, Tel Aviv“. Originally this Mizrahi-pop song was created for the Gay Pride Parade in Tel Aviv, but it became one of the hymns of the city, and the new summer hit. Also, remember “Le Haim” for cheers. It means “to life”, which is a nice way to say cheers.

You'll never get bored in Tel Aviv. Take part in the free walking tour in Old Jaffa that starts at the old clock tower at 11 am and 2 pm every day. Jaffa is one of the oldest inhabited places in the world; you'll learn a lot about the history of mankind. After that, you can take the bus to the Shuk Ha'Carmel market, walk in the crowd past the shacks and try this and that. Buy a fresh pomegranate juice for example or try the filled puff pastry. If you find Shuk Ha'Carmel to be too crowded and loud for your taste, there's also the Shuk Levinsky, which is less busy and the merchants aren't screaming their offers at visitors.

The Rothschild area is not only famous for its nightlife, but also its architecture. Tel Aviv has over 4.000 Bauhaus buildings, which is the reason why it's called the “White City”. You can walk from Rothschild Boulevard to Dizengoff Square (the one with the colourful fountain), on your way you will pass many of the Bauhaus buildings and even the Bauhaus Center, where you'll get more information about the conservation of the White City. Many interesting museums wait for you, too, just like the Palmach museum, the Diaspora museum or the Tel Aviv Museum of Art.

If you're looking for sports activities when there's no wind, try renting a SUP or a surfboard to compete with the locals in the waves. You can also bike or skate through the city. If you prefer company: The “Tel Aviv rollers” always meet on Tuesdays 21.45 o´clock near Habima (Tarsat2) to skate a 25 to the 30km route.

High concentrations of hi-tech industry can be found in the area around Tel Aviv, called “Silicon Wadi”. Tel Aviv considers itself as a hub of innovation and creativity, so it's no surprise that you'll find free Wifi in almost the whole city area – even at the beach. Nearly every restaurant has free Wifi, too, ask for the password when you order.

You have plenty of places to choose from in Tel Aviv. If you're on a budget, the hostel Hayarkon48 is conveniently located as it's only a two-minute walk to the kite beach. From the hotel's roof terrace you'll see the kites in the sky if there are any. There is a social area where you'll meet lots of new people and a well-equipped kitchen that you can use. Breakfast is included in the price, but don't expect too much; it's fundamental. If you prefer staying at a hotel, the Savoy hotel is just around the corner of the kite beach as well.

Airbnb is probably the best and at the same time the most affordable way to find a nice place to stay. Usually, the hosts are very nice and helpful and provide you with tips on how to get around and what to do in the city. Click on the accommodation tab to see all the currently available properties!

Tel Aviv From The Cliffs

The surfing scene in Tel Aviv is alive and well!

There are some good modern apartments to rent on the beach!

Search for Flights to (TLV)

Nitinat Lake is a hidden oasis for kiteboarders that are seeking steady thermal wind. The end of the lake opens up to the Pacific Ocean, and the cool coastal air gets sucked down the lake like a vacuum, creating the most incredible thermal. The surrounding area is old growth forest, making this destination seem like a setting for a kiteboarder’s…

Cape Hatteras is a beautiful, thin and small island situated in an extraordinary place in North Carolina. In Hatteras, you can truly relax. If it's windy, you go kiting. If it's not, you can go surfing and on the rare no wind or wave day you can go biking, suping, jetski tours or relax at the beach. Wind and Weather Year…

Sardinia delivers all the ingredients for the ultimate kiting island. Quality kiteboarding, fantastic food and some of the best wine in the world... With a wide array of holiday charters heading to the island, flights tend to be very cheap. Easyjet, Ryanair to name two that often have very cheap flights, be careful to book baggage before as well as…

Betti is an editor, writing mostly about finance, traveling and kitesurfing. Since 2012 she works as a freelance editor for several kite magazines. She quit here 9 to 5-job in 2015 to go on a trip around the world and go kitesurfing at the most beautiful beaches.

Been to Tel Aviv? What did you think?

Where are the Best Kitesurfing Beaches in Tel Aviv? 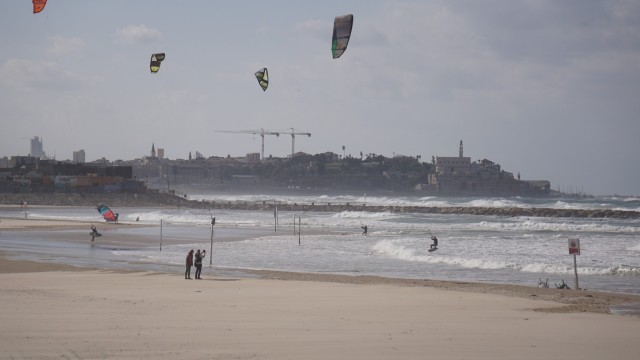 You'll find the kite beach of Tel Aviv at the watersports zone, just next to Opera Tower and Israel Surf Club.

The kite beach enjoys a mix of waves during winter and flat water during spring and autumn. Due to the jetties, waves get only around two to three meters here. You have plenty of space to launch your kite. 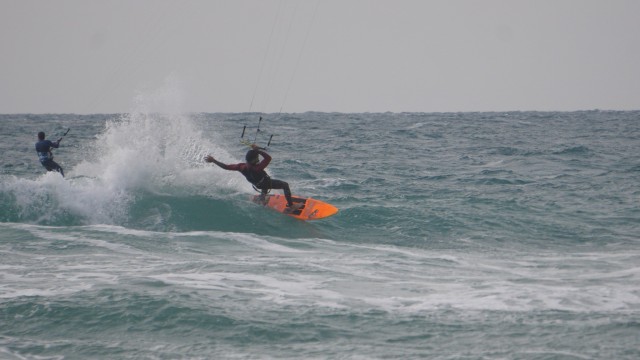 Beit Yanai has just the same conditions as Tel Aviv, with one difference: The waves get bigger there during winter.

When is the Best Time to go Kitesurfing in Tel Aviv?

Search for Flights to (TLV)