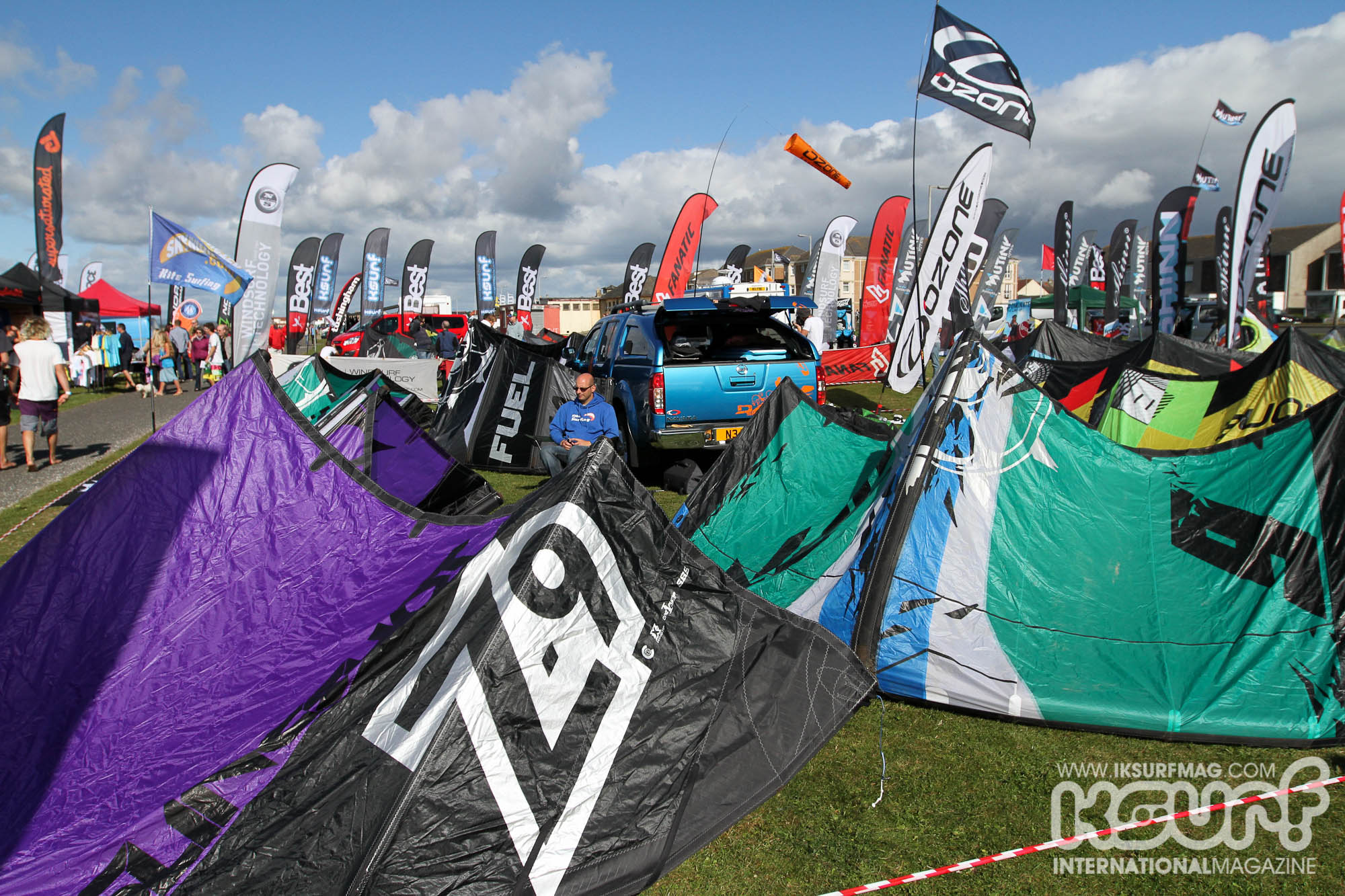 An awesome display from the UK Kite Industry!

While a bunch of kiters on the south coast were doing their thing a fair few more had travelled all the way to Troon in Scotland to take part in the Scottish Windfest. The British Kite Surfing Association were holding the final round of the 2013 tour here and literally everything was to play for. While the first event of the year suffered from a lack of wind, and sponsorship issues caused cancelations elsewhere the annual event in Troon was stacking up to deliver the goods. 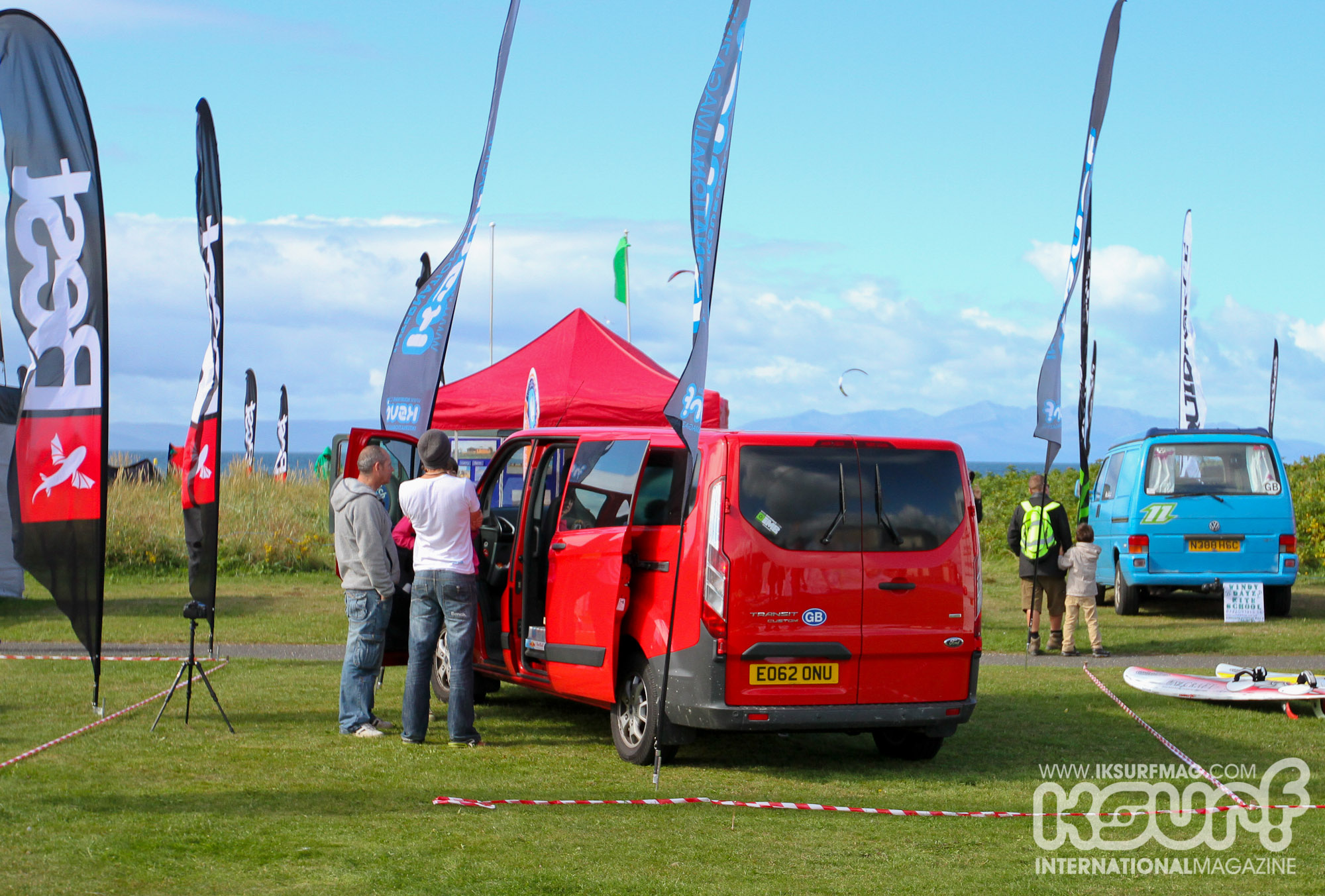 Light winds were forecast for the Friday and Saturday but the charts for Sunday were quite literally off the scale. In the end it all worked out perfectly enabling the trade to show off their 2014 wares in the relatively calm and warm air of the Saturday and then pack up the site and hunker down to watch some of the best riders in the UK do their thing. 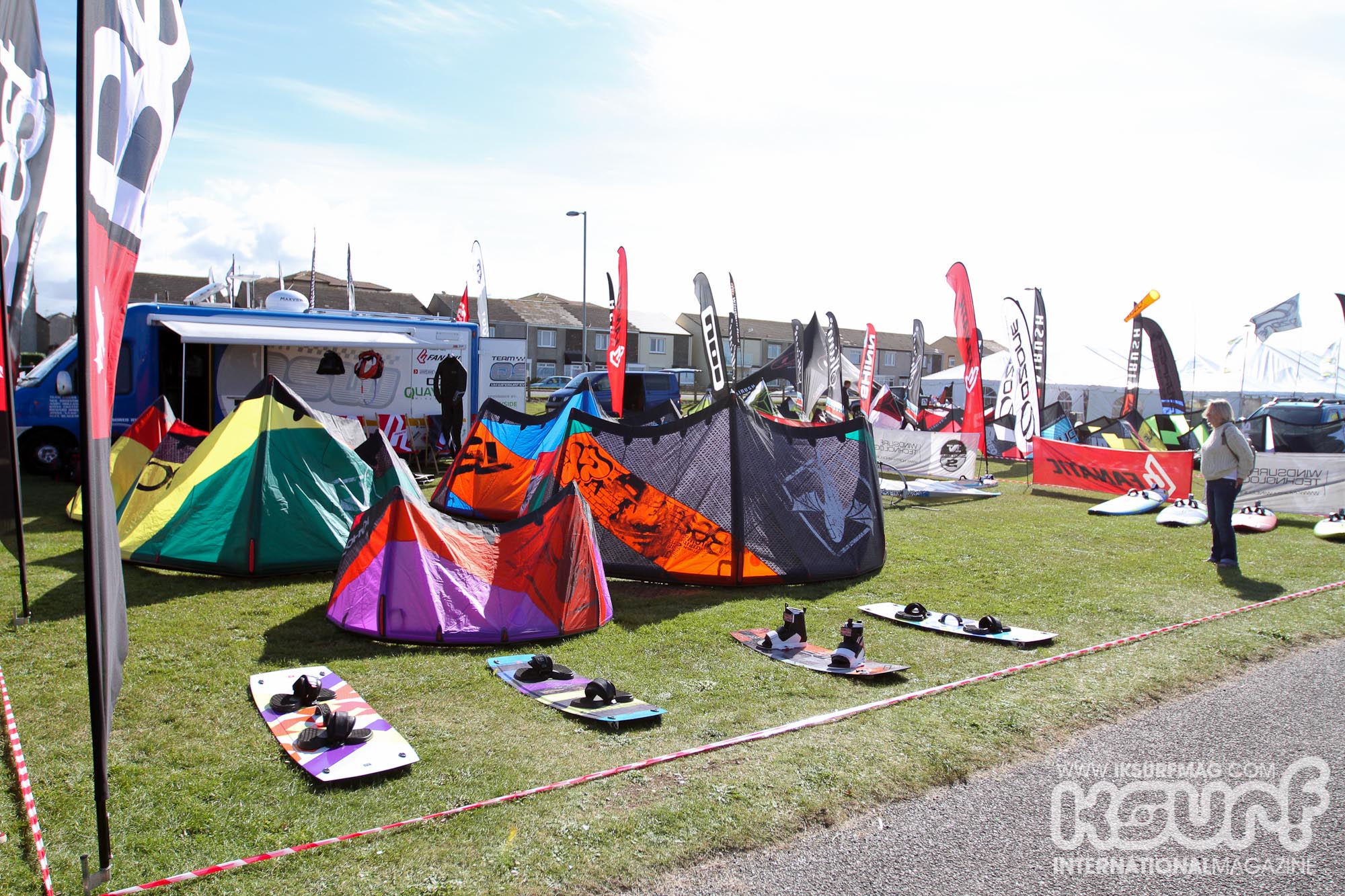 A great display from Best Kiteboarding.

Plenty of brands made the effort to get to the event, including Airush, Brunotti, Shinn, Ozone, Slingshot, Peter Lynn, Ocean Rodeo, Gaastra, Best and Mutiny. It was great to see such a huge turn out from the industry and of you didn’t make it, shame on you. There were plenty of kiters mulling around the site on Friday and Saturday, chatting to the reps and getting the low down on all the new equipment.

The wind toyed with us on the Saturday, allowing a few riders to get out on big kites and race boards, but sadly it didn’t pick up enough to run the freestyle competition. There was plenty of action on the water though with SUP demos and some light wind windsurf races. The warm Scottish sunshine also went a long way to put plenty of smiles on everyones face. Sadly with the huge forecast for Sunday the Saturday night party wasn’t quite as rowdy as one might have expected, it turns out that pro kiters are a professional bunch and with the stakes being so high it was understandable that most of them headed off to bed early. 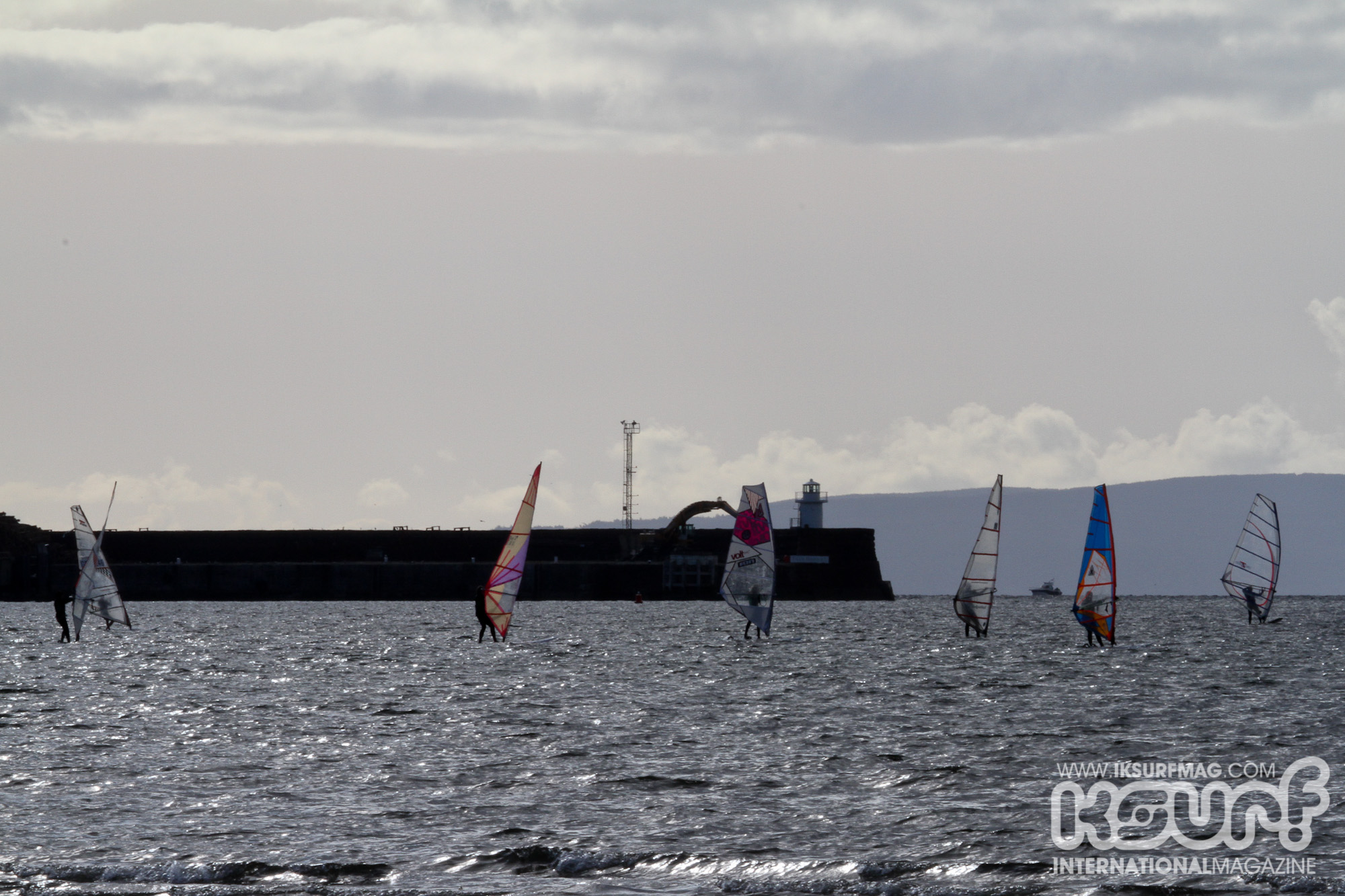 Light winds meant the kite event had to wait until the Sunday to kick off.

Sunday morning dawned with driving rain and howling winds, the forecast had come good and the race crew set about organising the various competitions for the day. The plan was to kick the Amateur Mens event off at 10.30, then run the Pro Women’s and finally the Pro Mens heats. Some of the heats were going to be running back to back to ensure the race crew could get all the rounds finished in the limited time allowed. 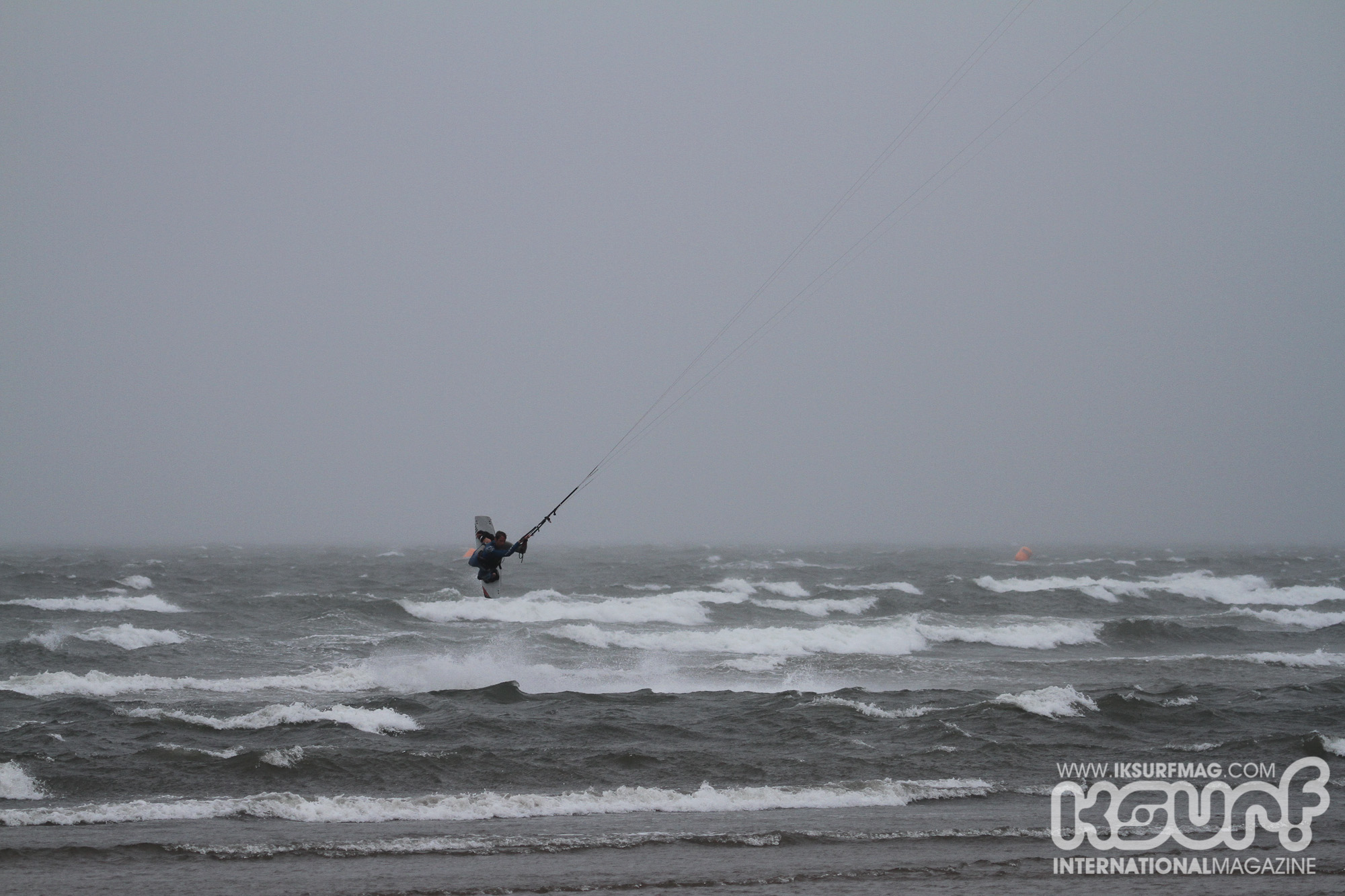 With the finals of the 2013 tour being decided it was going to be an important few hours for the competitors. The wind was howling and the rain was hammering down, the amateur and ladies heats were arguably run in the worst of the weather as far as the rain was concerned. It was all i could do to jump out of the van and grab a quick image before the driving water covered the front element of the lens and rendered any attempts to take photos futile! 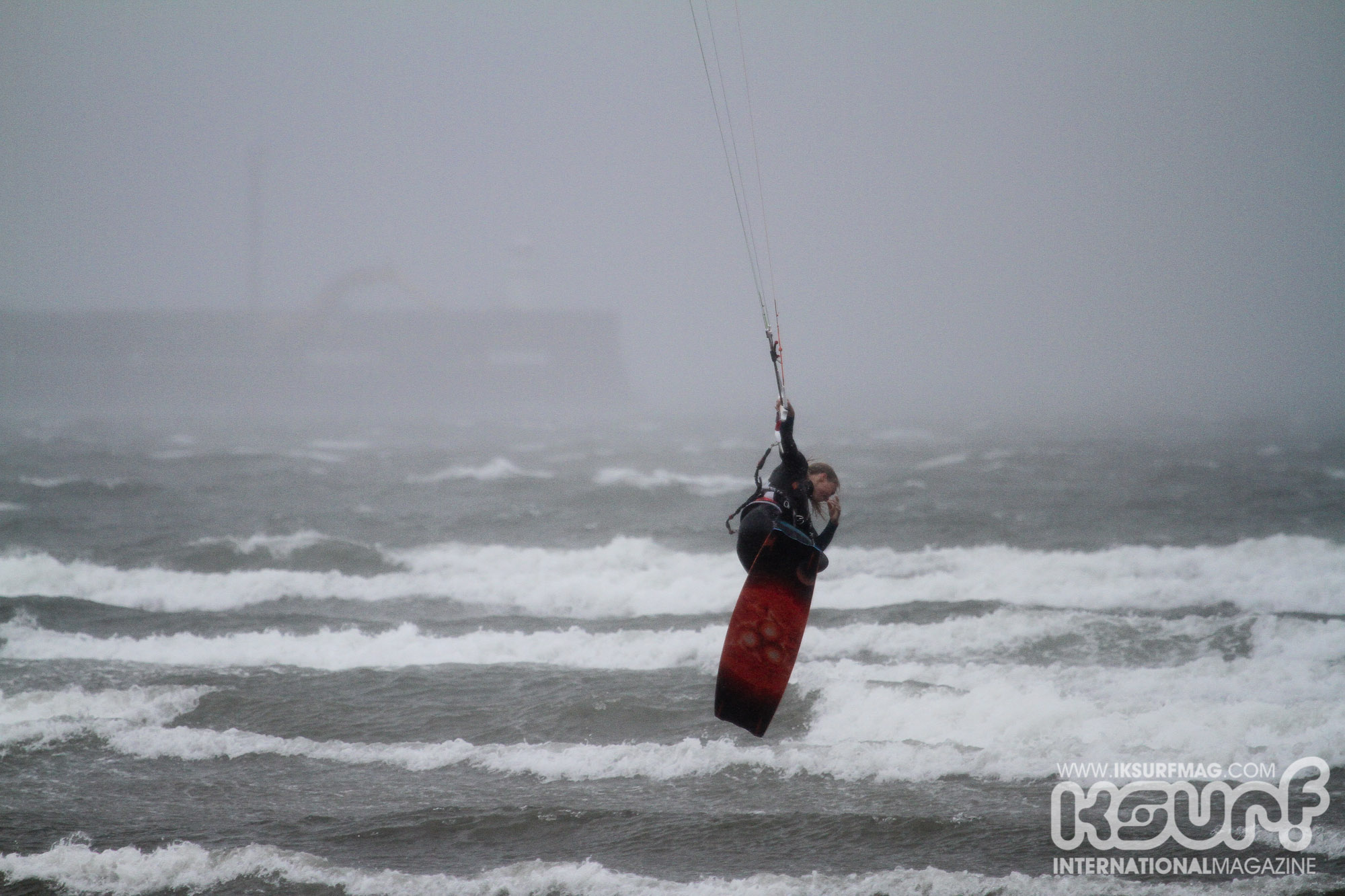 Thats not an Instagram filter, thats water on the lens!

Stand out riders had to be Craig Smith, Pete Jones and Pete Whiteley in the Amateur and Senior fleets, we particularly enjoyed Pete Whiteley’s deadman kite loops! Hannah Whiteley was demonstrating her prowess in the tough conditions, plenty of unhooked moves and big jumps set her apart from the rest of the girls, although a special mention should go to Polly Crathorne, Holly Kennedy, Suki Robertson and Rosanna Jury who were all riding well in the survival conditions. 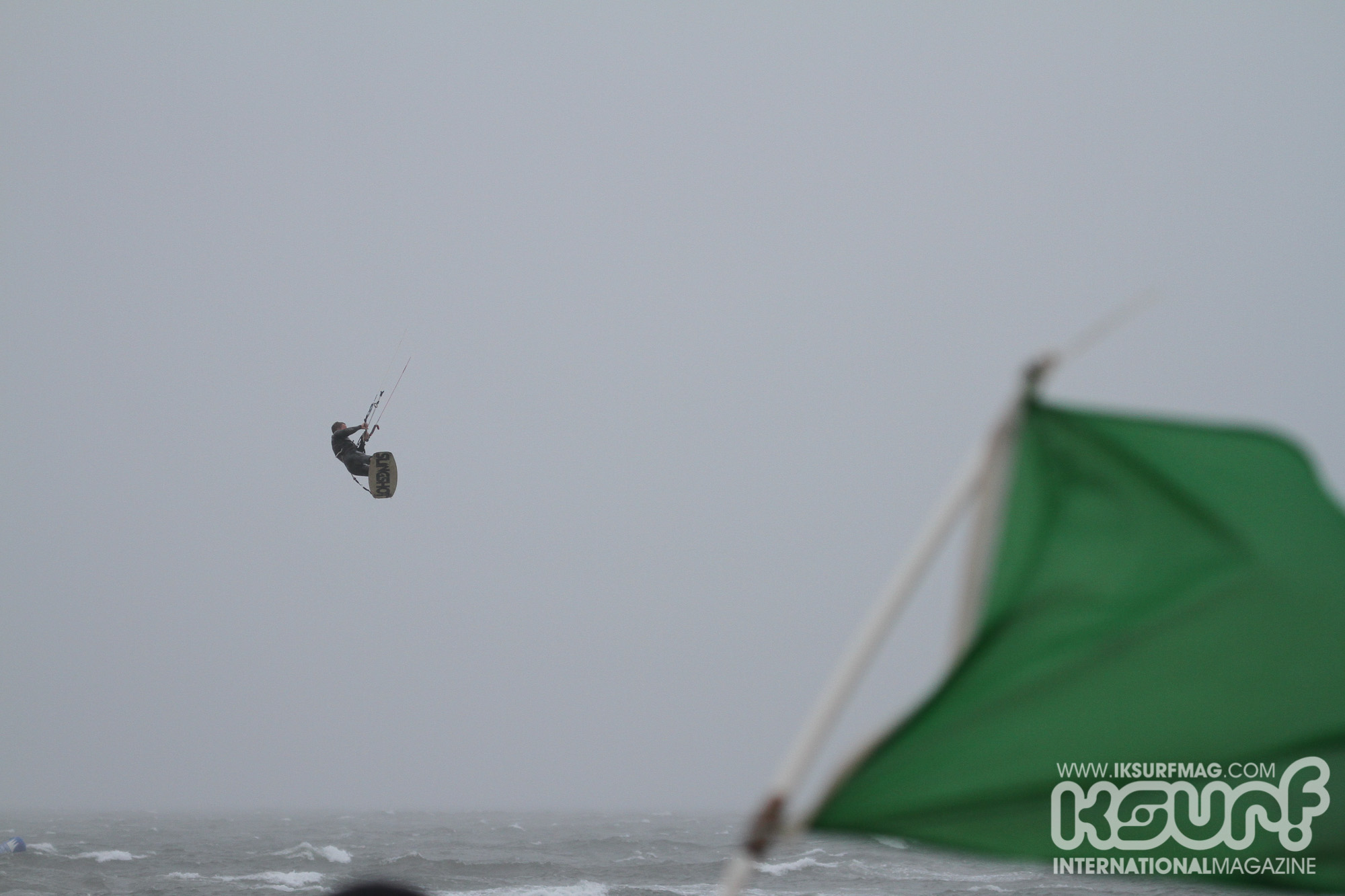 As luck would have it, by the time the Pro Men hit the water the rain had calmed down and there was the odd hint of blue sky. Fortunately for the camera gear the weather continued to improve whilst the wind continued to howl. All the guys were on their smallest kites and doing their best to put on a good show for the watching crowds. George Dufty was looking very solid right from the start, landing every trick he was throwing and ensuring there was plenty of variety too. Morgan Tinsley was also riding really well and mixed up his riding between big kiteloops and more technical moves. 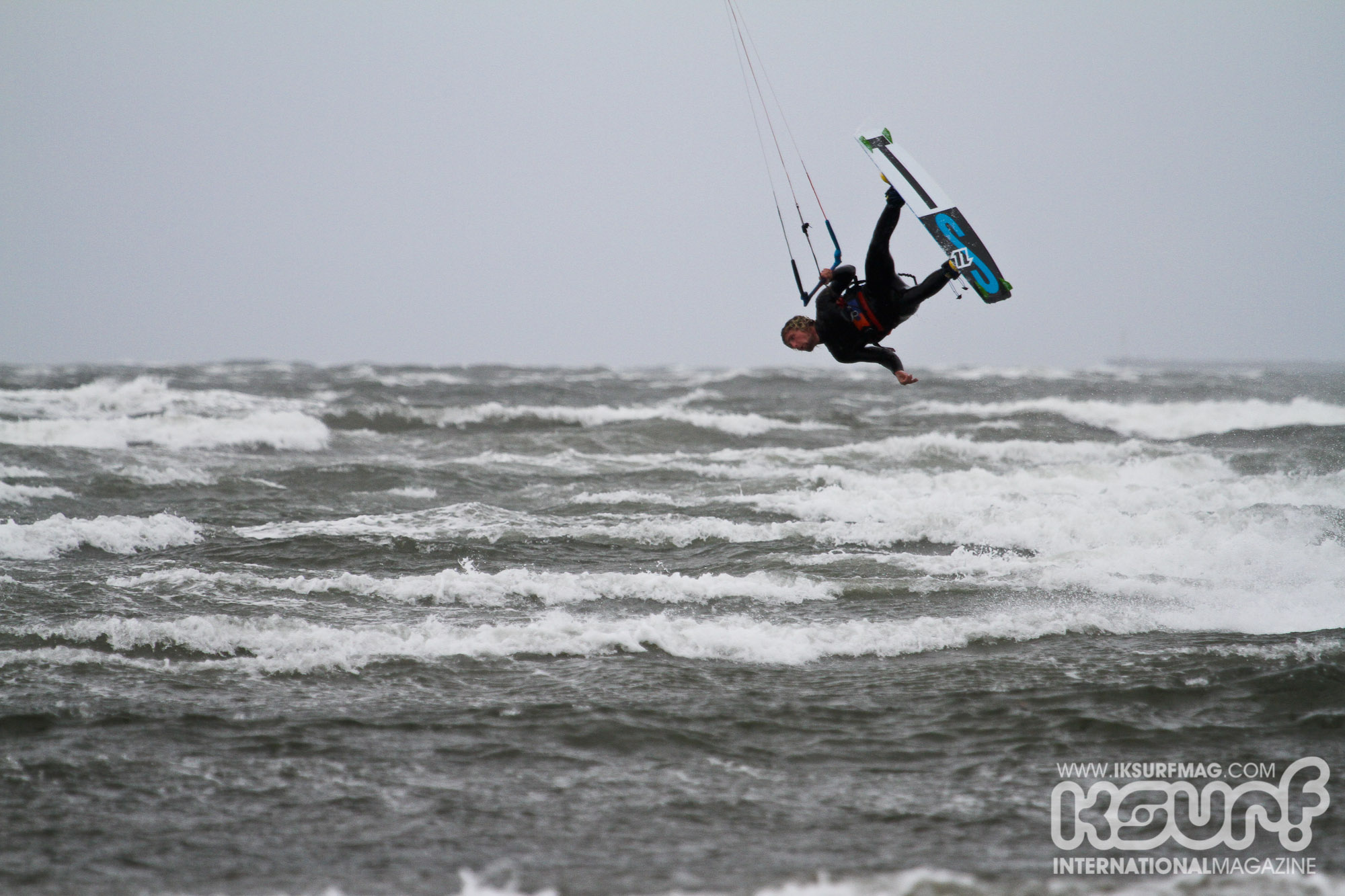 Jon Bleiker was boosting some big tricks and landing a few good looking mobes, Richard Flindall arguably wasn’t riding his usual best but there were moments when his talent shone through. Robin Snuggs deserves a special mention as he threw down the biggest kiteloop of the event, but unfortunately broke a rib when he landed hard and was out for the rest of the comp. 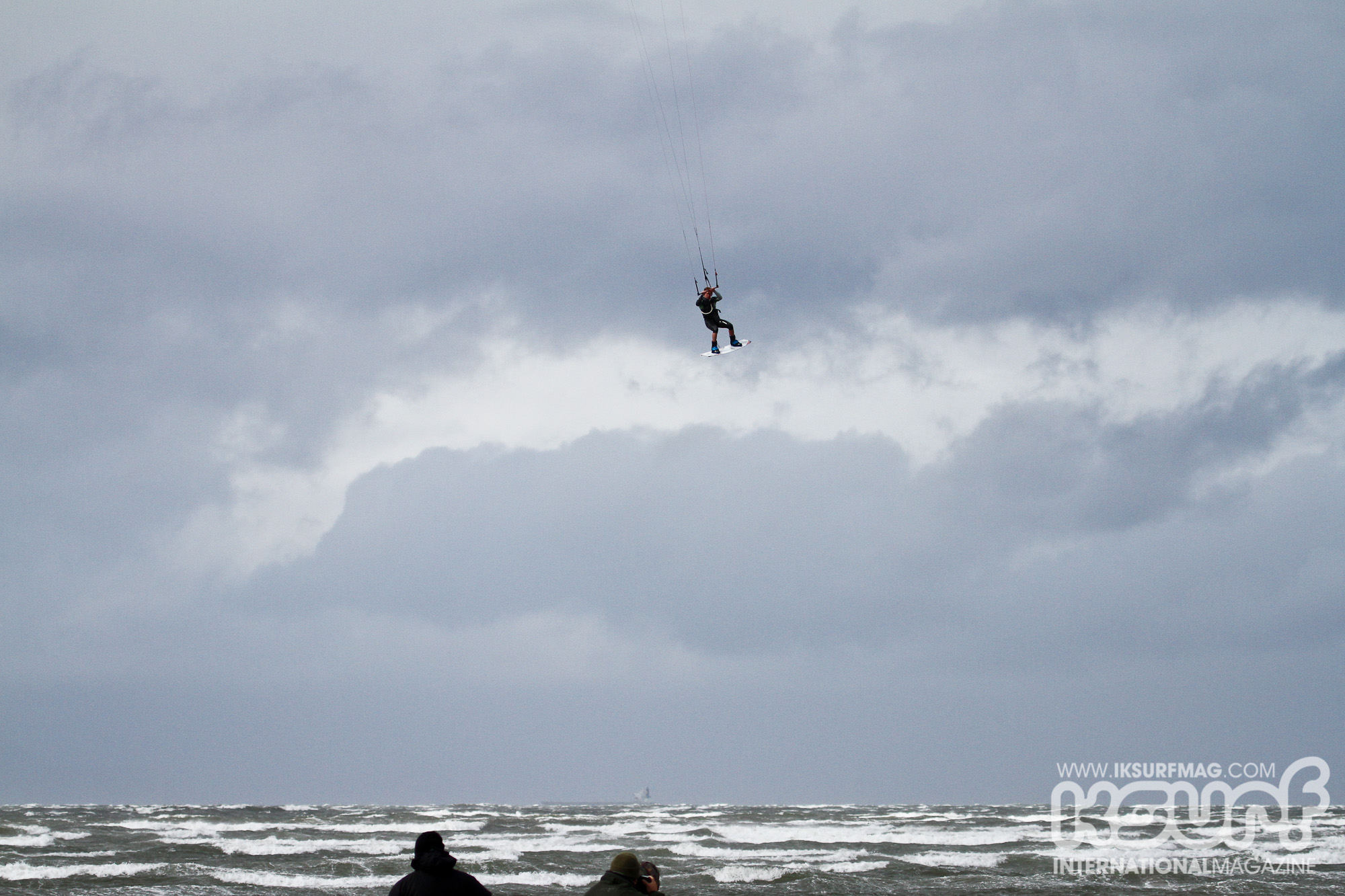 In the end the final came down to Jon, Richard and George, Jon struggled with his kite crashing a couple of times and inverting, Richard pulled up short early on and the final was left to a master class of riding in tough conditions with Goerge Dufty looking consistent and fluid throughout. 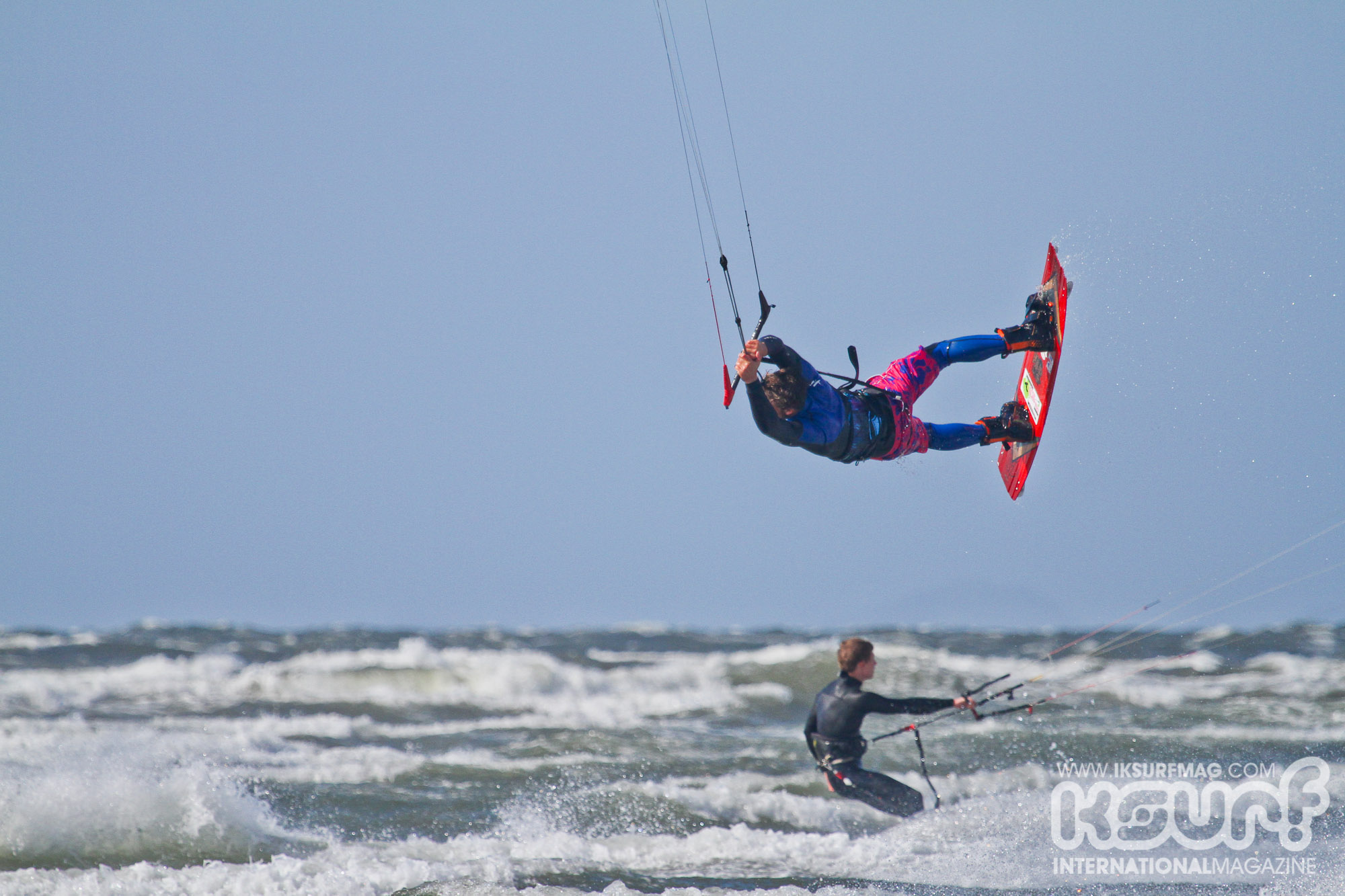 The final results for the 2013 BKSA Season look like this:

A huge thank you to the guys at the Scottish Windfest for putting on such an awesome event with parties and entertainment running round the clock, and also to the the British Kite Sports Association for running the kitesurfing competition.

ARRIVED AT THE COMPETITION SPOT IN TARIFA - 34

How to SPIN! Kitesurfing Tutorial | Get High with Mike | JTTT