As promised here is a run down of the Twin Tips and Surfboards from the recent meeting in Mauritius. It was the perfect location for testing with a variety of water conditions available, ridiculous chop on the channel (seriously enough to through you completely off your board), to perfect flat water, big choppy waves and thundering fast left handers, Le Morne has it all!

Ever since the first Jaime Pro model board, which utilised the snowboard sandwich technology of the time, the kiteboards from North have been propelled into the forefront of the market. In fact that very board is the best selling kiteboard of all time, 2013 marks the 7th year that it has been in production. Thats a pretty incredible claim for any board and as it is so popular we thought we would start with it! This year it has been completely redesigned from the ground up and given a more freestyle outline. In terms of construction it has a new carbon beam on the top and bottom which adds strength and saves 10% in terms of weight over last years model. On the water the Jaime certainly feels more agressive then last year, it has quite a stiff mid section and while it loses out a little over the comfort of the previous model in the chop, it certainly makes up for it in terms of performance. It’s fast, delivers lots of pop and the tips deliver enough flex to smooth out the landings. The rocker line has been changed to still keep it’s freeride roots intact but it definitely leans a little more towards the more aggressive rider looking for big jumps, lots of pop and a fast board. 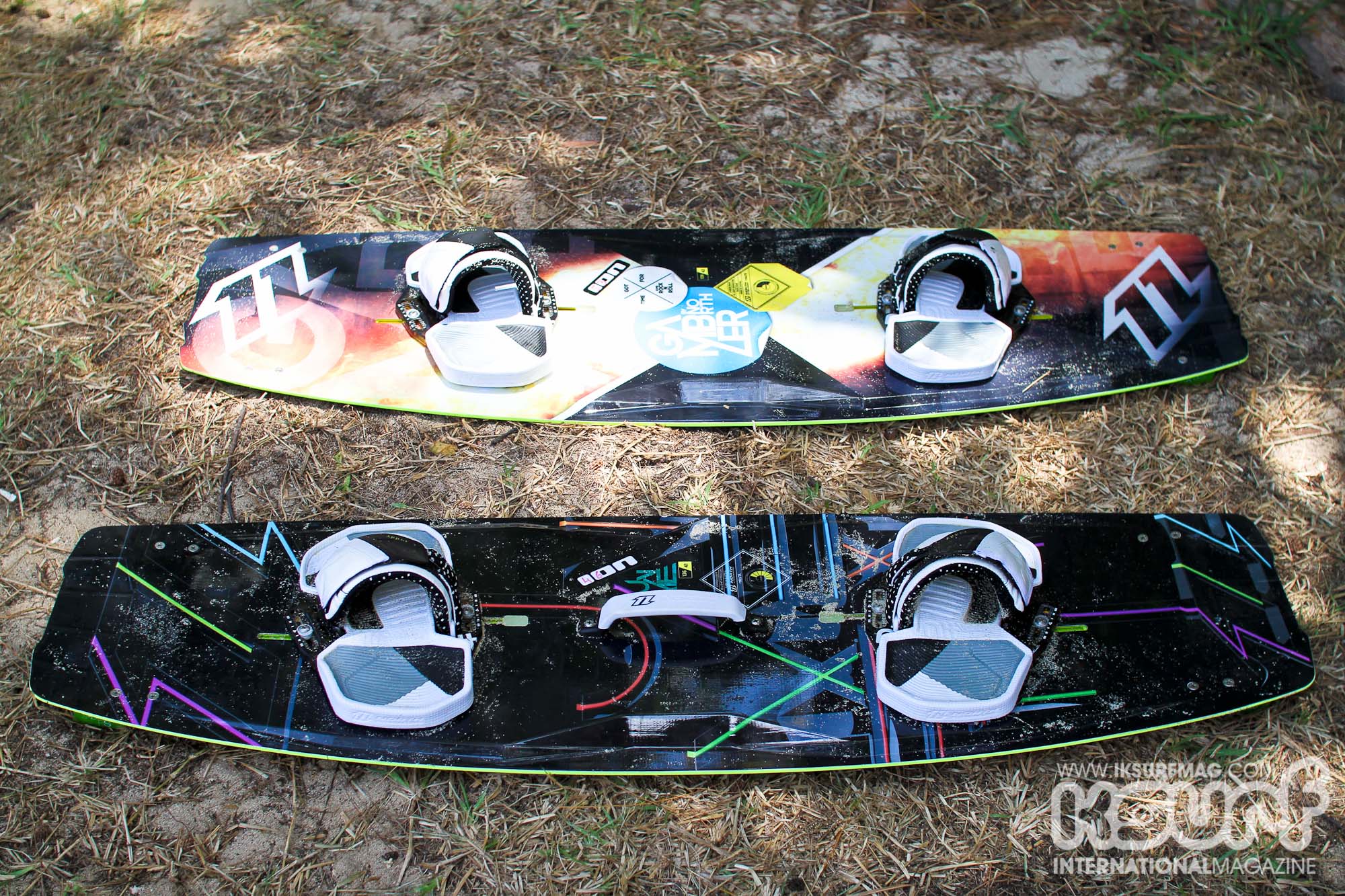 2013 Jaime and the Gambler - Radical Performance

We also had a quick blast on Tom Court’s new baby, the Gambler. Tom has been working with the R&D team on this one for some time and he is really happy with it. Aimed at the wakestyle riders out there it features a wake rocker line, inserts for boots and no where to put a handle! (It is a board not a shield after all!) If you like riding with boots then combine it with the new Frank Boot which North have made in conjunction with Ronix. On the water it feels loose with the small 3.5cm fins, perfect for landing handlepasses and surface rotations. The pop is huge with the stiff mid section allowing you to build up lots of pressure. We didn’t have any rails to hit, and being honest it would have been my face rather than the board that hit them, but it is equipped with the “Tuff Skin” base to keep it’s natural good looks when you hit the obstacles. 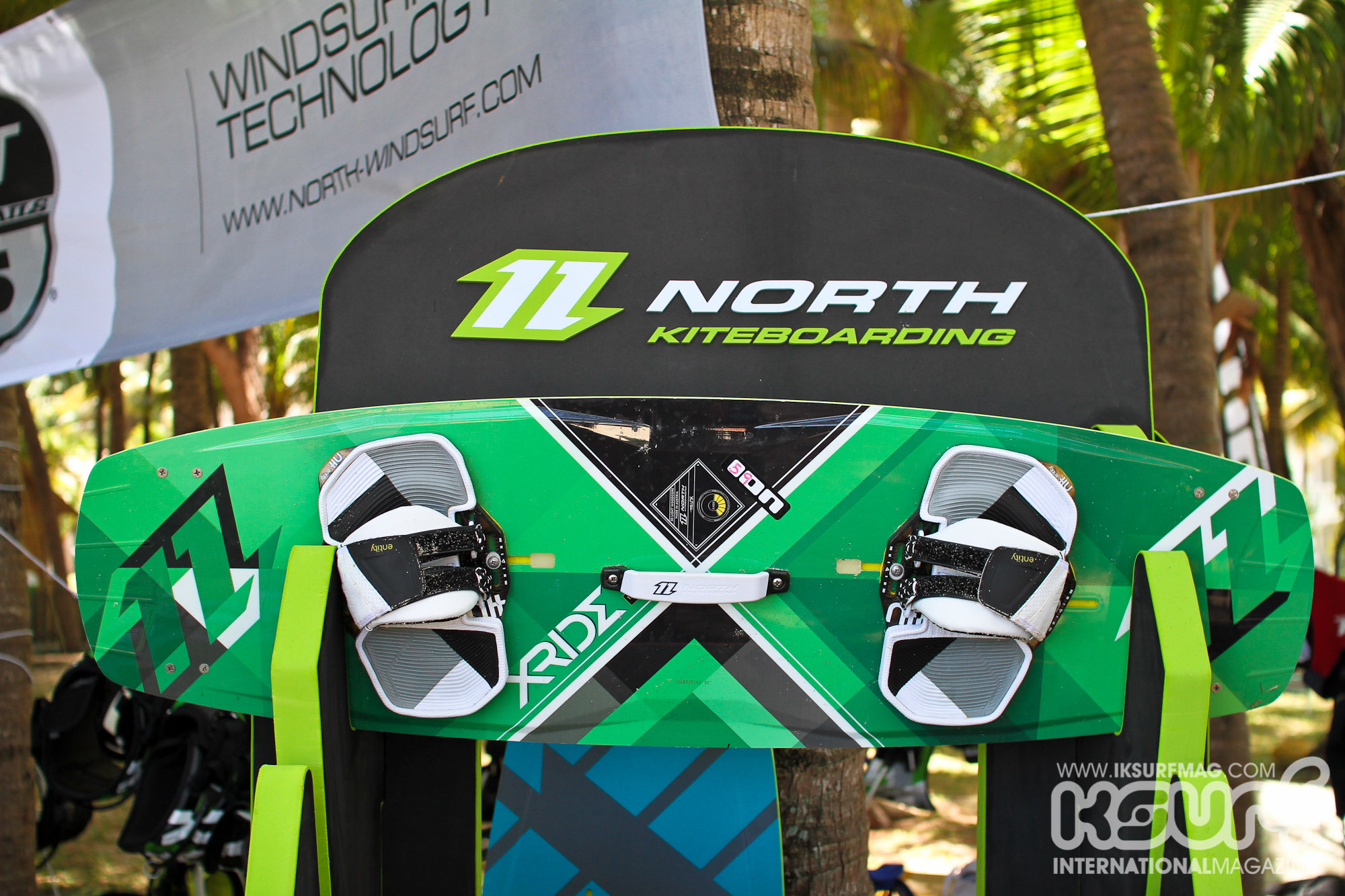 This board makes you a better rider - FACT!

The X-Ride has been the best selling board in the North range for the last couple of years, it has a long way to go to eclipse the Jaime in terms of overall numbers but it certainly has the right formula to get it there. It is an incredibly easy board to ride, medium flex makes it smooth as butter through the chop and exceedingly forgiving. It carves from rail to rail like a downhill skier on steroids and has enough pop to put a smile on anyones face without being so aggressive that it becomes uncomfortable. A lot of riders progress from a kiteboard too quickly, wanting the latest pro model to look good down the beach. The fact is the X-Ride makes kiting so easy that it will improve your riding no end, don’t run before you can walk, if you like freeride then put some miles in on this baby and see your level improve. 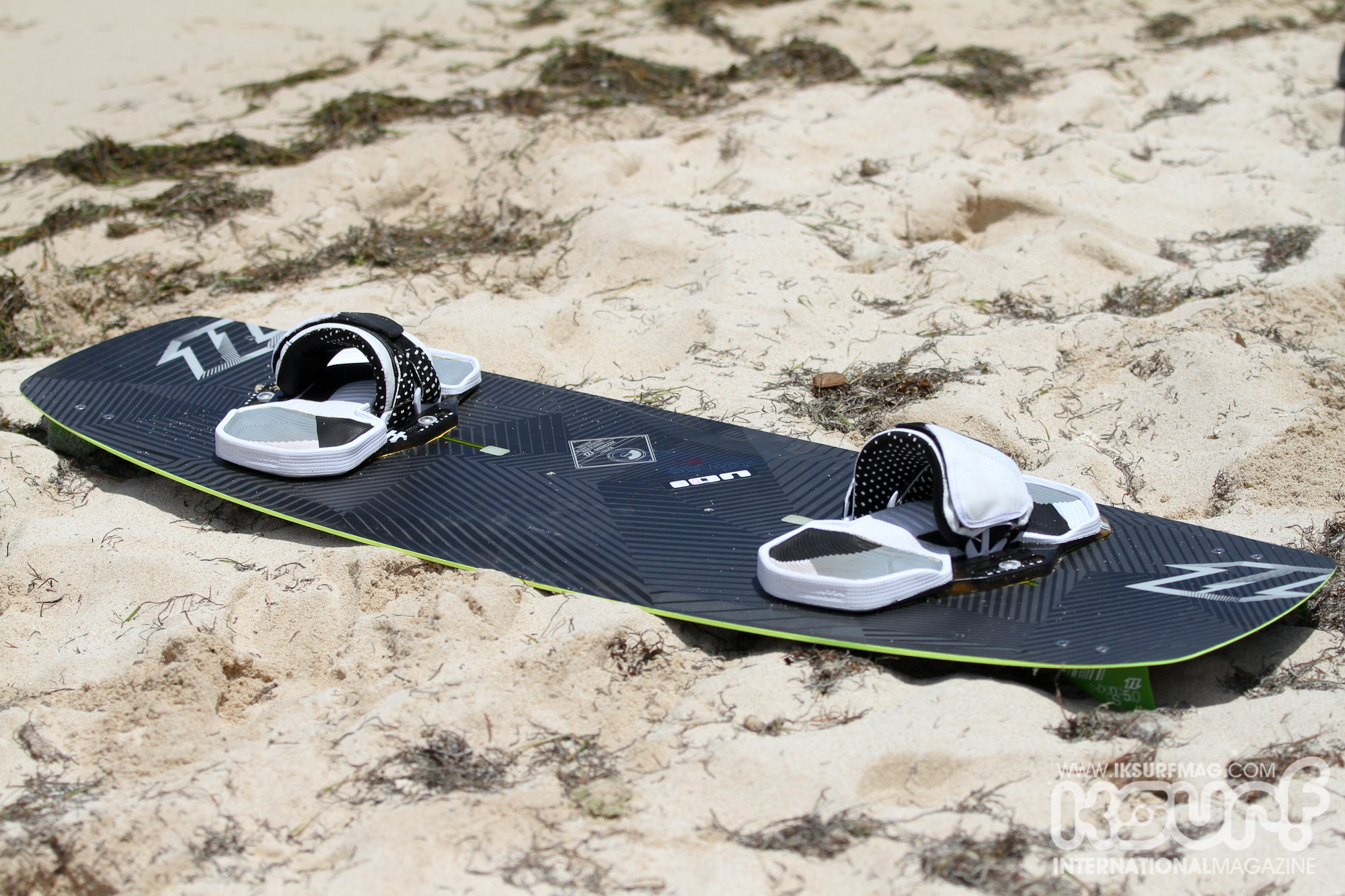 What is so special about the Select?

I was really excited to be able to ride the Select, ever since it was first introduced to the range it has cause a bit of a controversy. It is prohibitively expensive, yet North have sold them in large numbers. Riders who own one rave about them, and guys who have tried them all sing its praises, so it was about time I had a go! It sits at the top of the North Kiteboarding range, using all the top technologies available to them, including the Oxeon Textreme Carbon. This material uses a Spread Tow carbon structure which enables North to put reinforcements where they want, using less material giving you a thinner board with more strength and a smoother finish. There is also a 20% weight saving over traditional carbon fabrics. It’s pretty techy stuff but does that translate on the water? We certainly noticed the lightweight nature of the board, it felt effortless on your feet when jumping and rotating. It was also exceedingly smooth through the chop, like a magic carpet, but still delivered a very high performance level of pop, which was impressive as normally when you put comfort into a board you sacrifice speed and pop. Carving was great fun too, and it was honestly one of the best sessions I had on a twin tip during the whole week. Whether that was the board, my riding or the conditions is hard to say, but I do now understand why people love this board so much. For sure it is expensive, but then so is a Mercedes compared to a Skoda. I’m not saying other boards are Skoda’s far from it, but this is packed with technology, rides like a dream and puts a smile of your face, so why not keep it a little bit special? The formula certainly seems to be working for North! 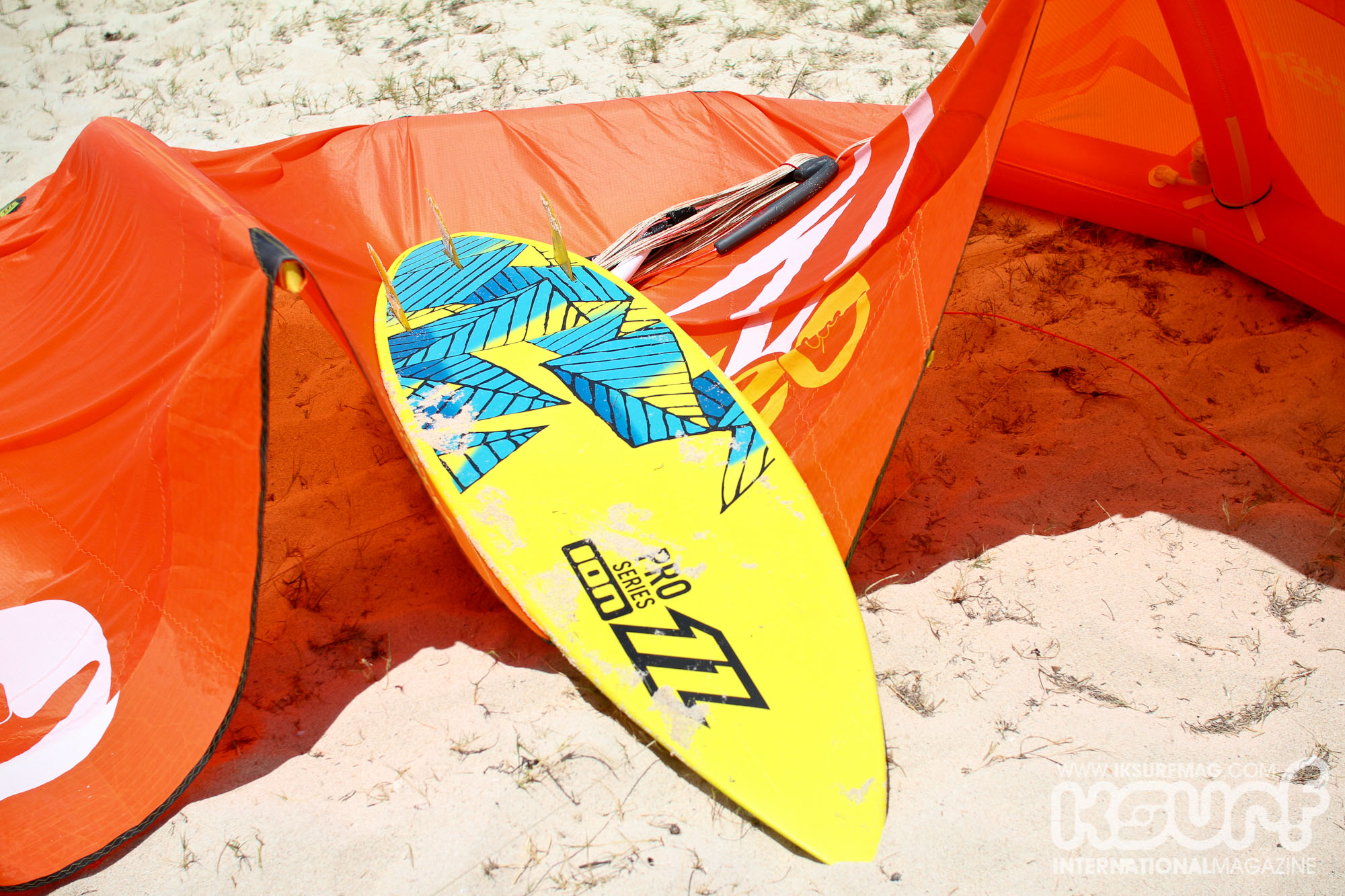 The new jewel in the North Kiteboarding crown...

North were one of the first companies to produce a production surfboard, and they have an extensive range with no less than 8 boards in the surfboard line up. We won’t go into too much detail as we have a Surf Board test coming up in the mag, so here is a quick overview for you… 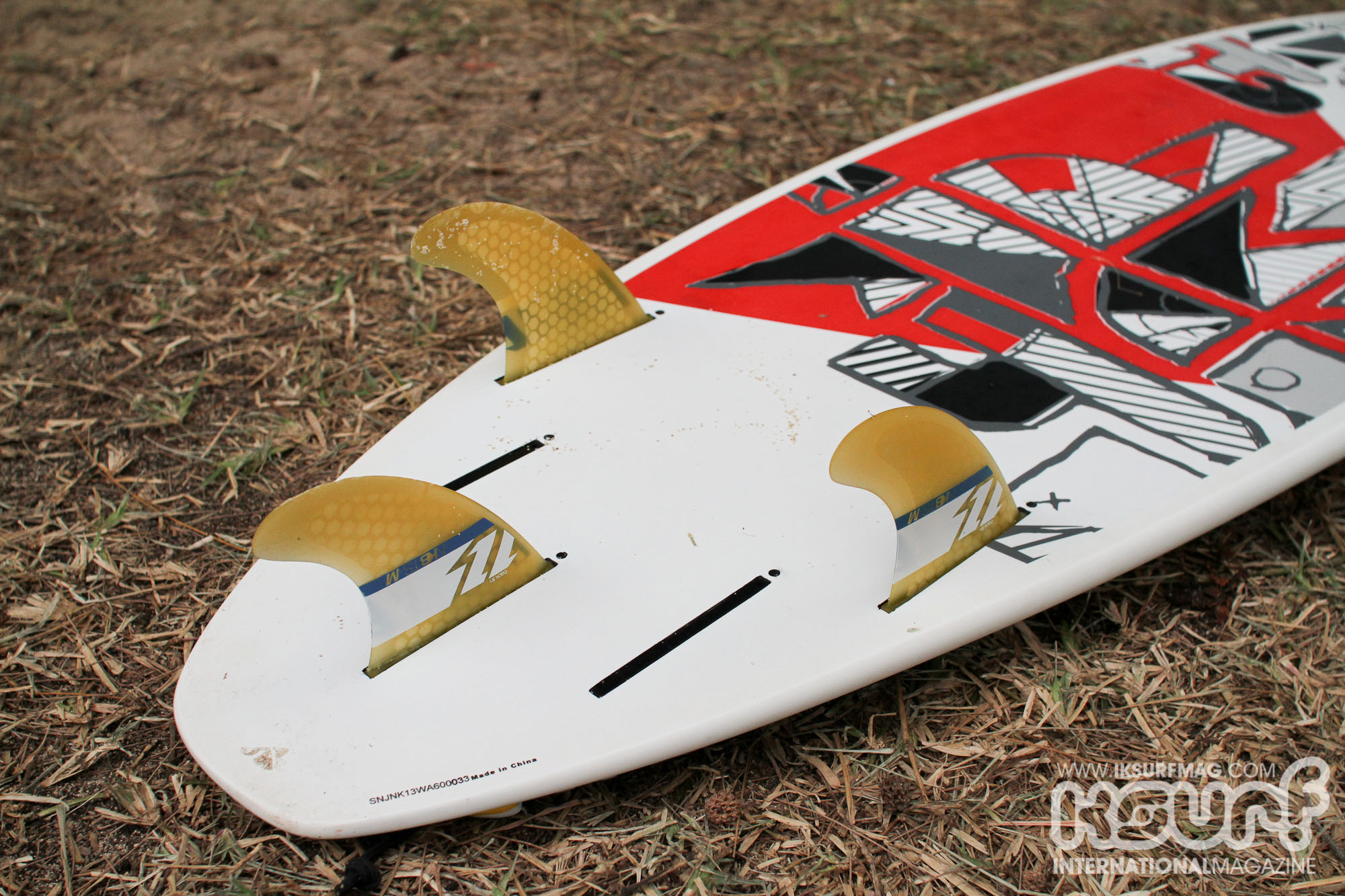 Probably the most popular choice in Europe and further afield is going to be the Wam, we can see these selling like hotcakes as they are so versatile. At home in onshore mush and perfectly happy at barrelling One Eye with options for a thruster or quad set up the Wam really can do it all. It is also wide enough to get going early in light airs and hold its speed through the bottom turn. The quad fin set up feels loose at the top and delivers speed and drive at the bottom, thruster mode feels more traditional and a little smoother on the wave. 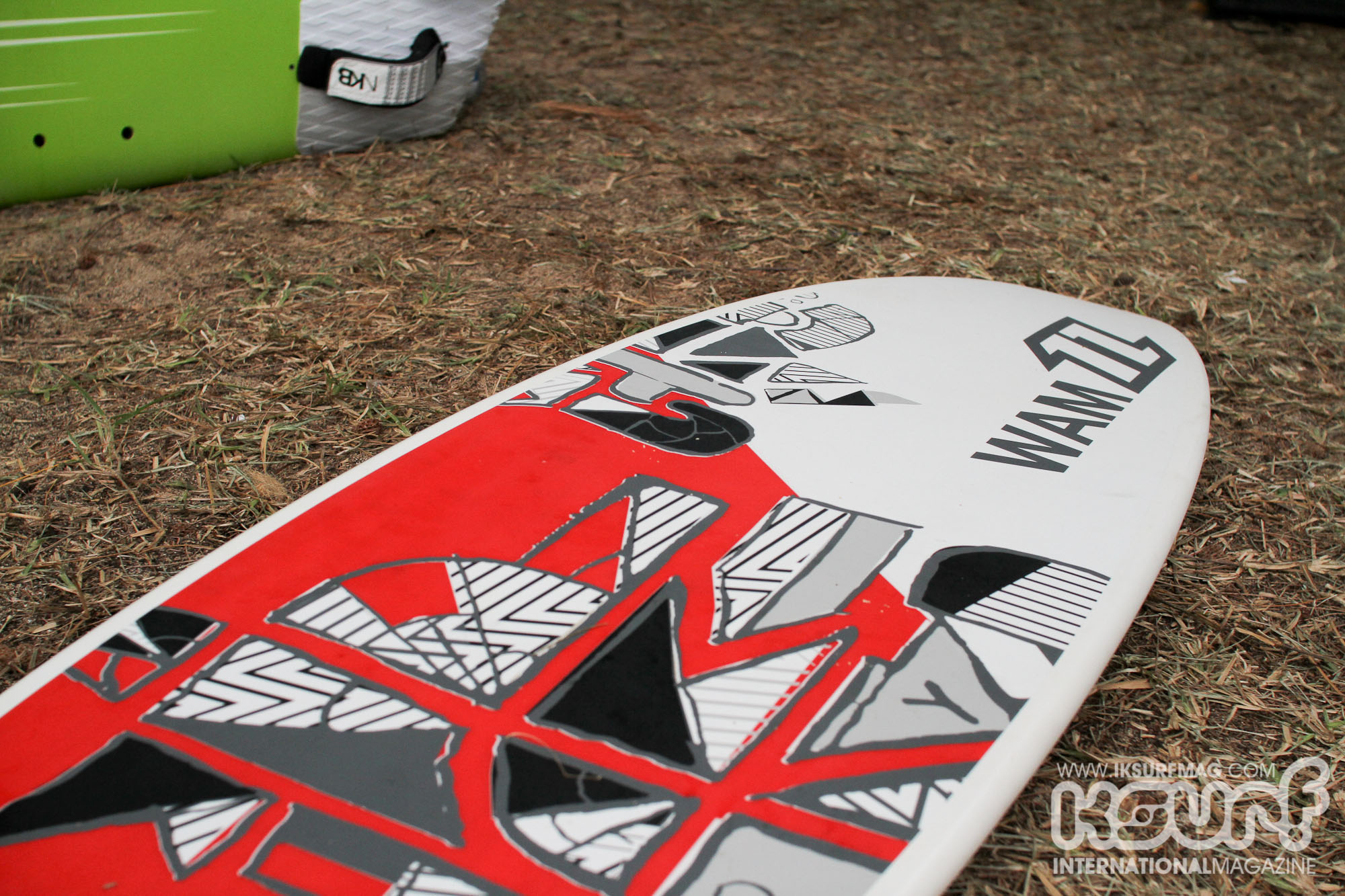 The do it all wave machine!

We also rode the Kontact, which was perfectly at home in the big surf of One Eye, a little thinner than the Wam it feels smoother through the chop, but needs a little more power or a smoother bigger wave to get up to speed and start to drive through the turns. If you are blessed with great wave conditions at your local spot the then Kontact would be our choice every time. Traditional thruster set up it feels so solid in the bottom turn and snaps of the top smoothly.

Totally new for 2013 is the Pro Series, aimed at the pro rider looking for the ultimate big wave slayer, it was designed with places like One Eye in mind it is the perfect tool to have in your quiver for the bigger days. But, and it is a big but, it was a standout favourite among a few of the guys out there, and not just in the big stuff. We fell in love a little bit with the 6’2″ which felt so planted and steady on the wave face, it cranked through the turns and never missed a beat. It also felt a little smoother and somehow more alive than the other boards. We felt it sits neatly between the Kontact and the Wam in terms of it’s potential use, yes it is an all out “pro” machine, but it feels great in small waves and is a blast to ride in the big stuff. Decisions, decisions… If you get a chance to ride one then take it, we loved it! 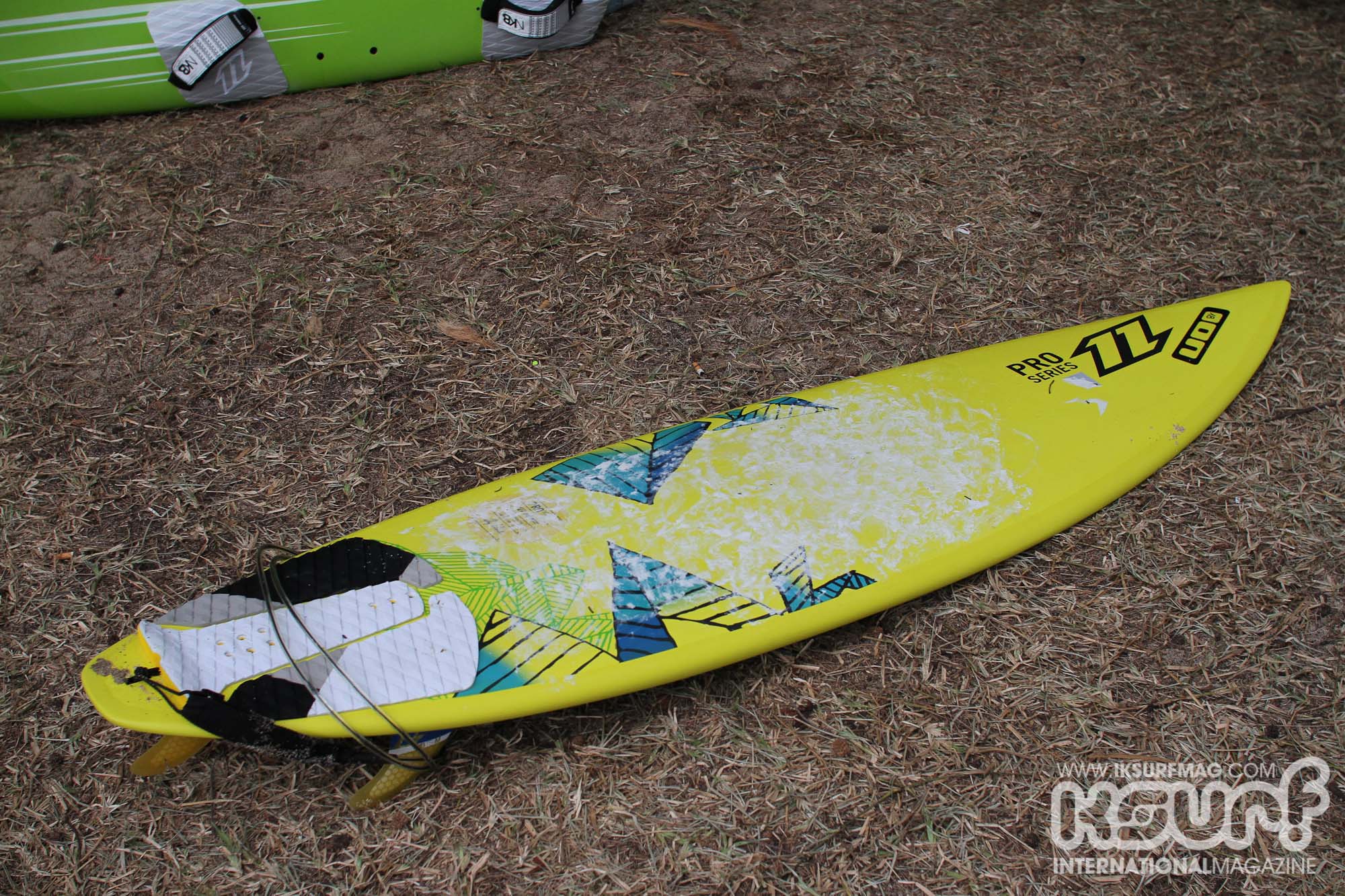 Other boards of note are the SkimFish and Nugget, both aimed at having fun on the lighter wind days but it is worth noting the Nugget was seen at double overhead Manawa and didn’t seem to be holding Benoit from Kiteboarder Magazine in France back! There is also the WooHoo which is a board aimed at female riders, Kirsty Jones commented that it was always a favourite on here all womens wave riding courses, and not just because it is pink ;-). Lastly the Whip, which is aimed at smaller waves and strapless freestyle tricks and the Whip X-Surf which is aimed at the rider wanting a board they can surf and kite with.

Overall it is an impressive line up from the team and we would highly recommend getting a test ride on the Select, Pro Series, new Jaime and the X-Ride, oh and dont’ forget the one board does it all wave machine the Wam! 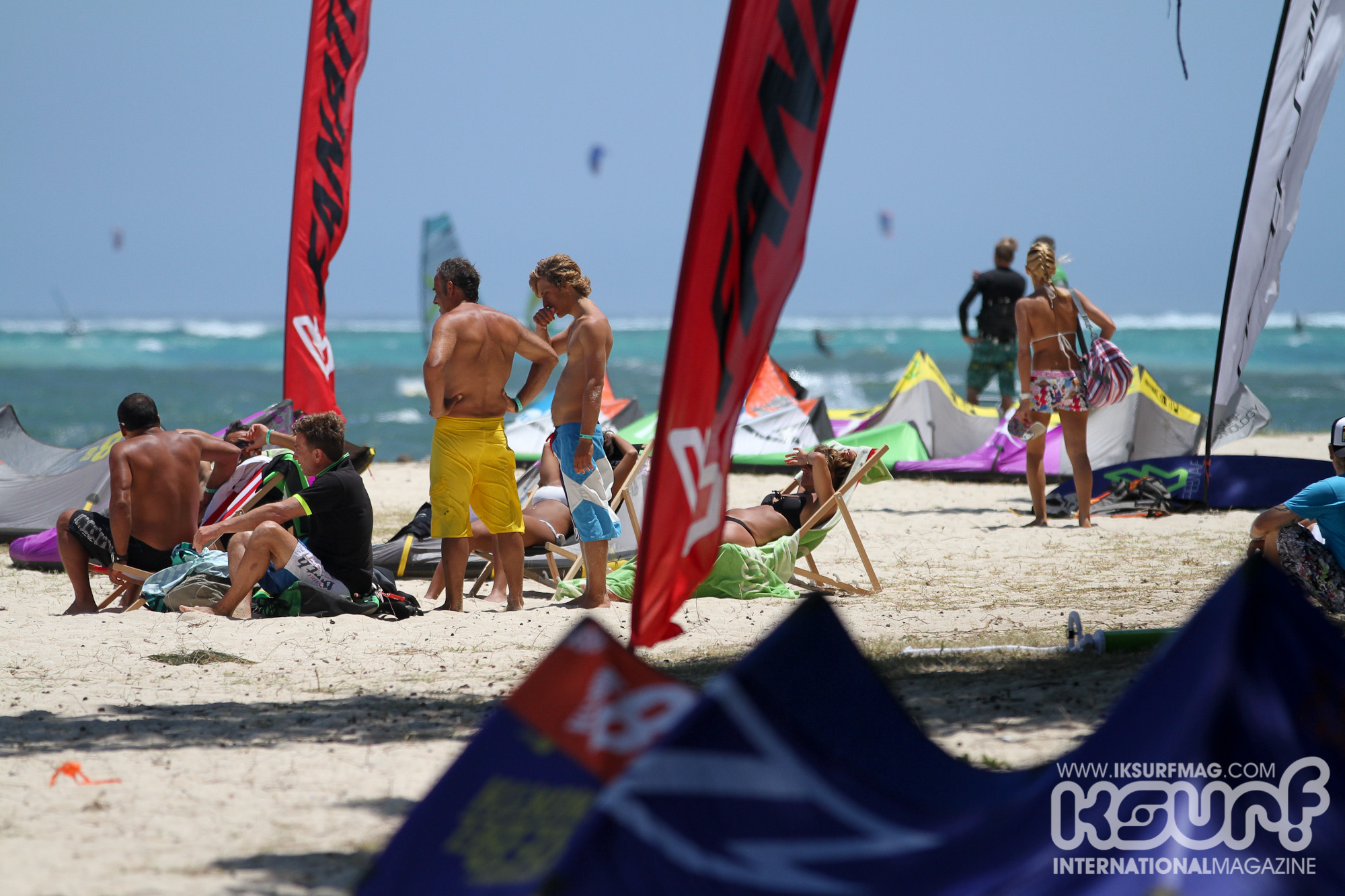 With all the wind, there wasn't much time for sitting about!

Lastly, lets not forget the new North Trust Bar, OK it has been around for a few weeks now and most of you have seen it, but it is worthy of another mention seeing as we have talked about most of the 2013 equipment already! The biggest news is the overall polished feel the bar has, the integrated floats, the clever bar length adjust system, the new Vario Cleat and of course the Iron Heart release system. We have always been a fan of North bars, but some riders have felt they were over engineered or too cluttered, this year you still get all the engineering, but in a neatly finished package… Perfect! 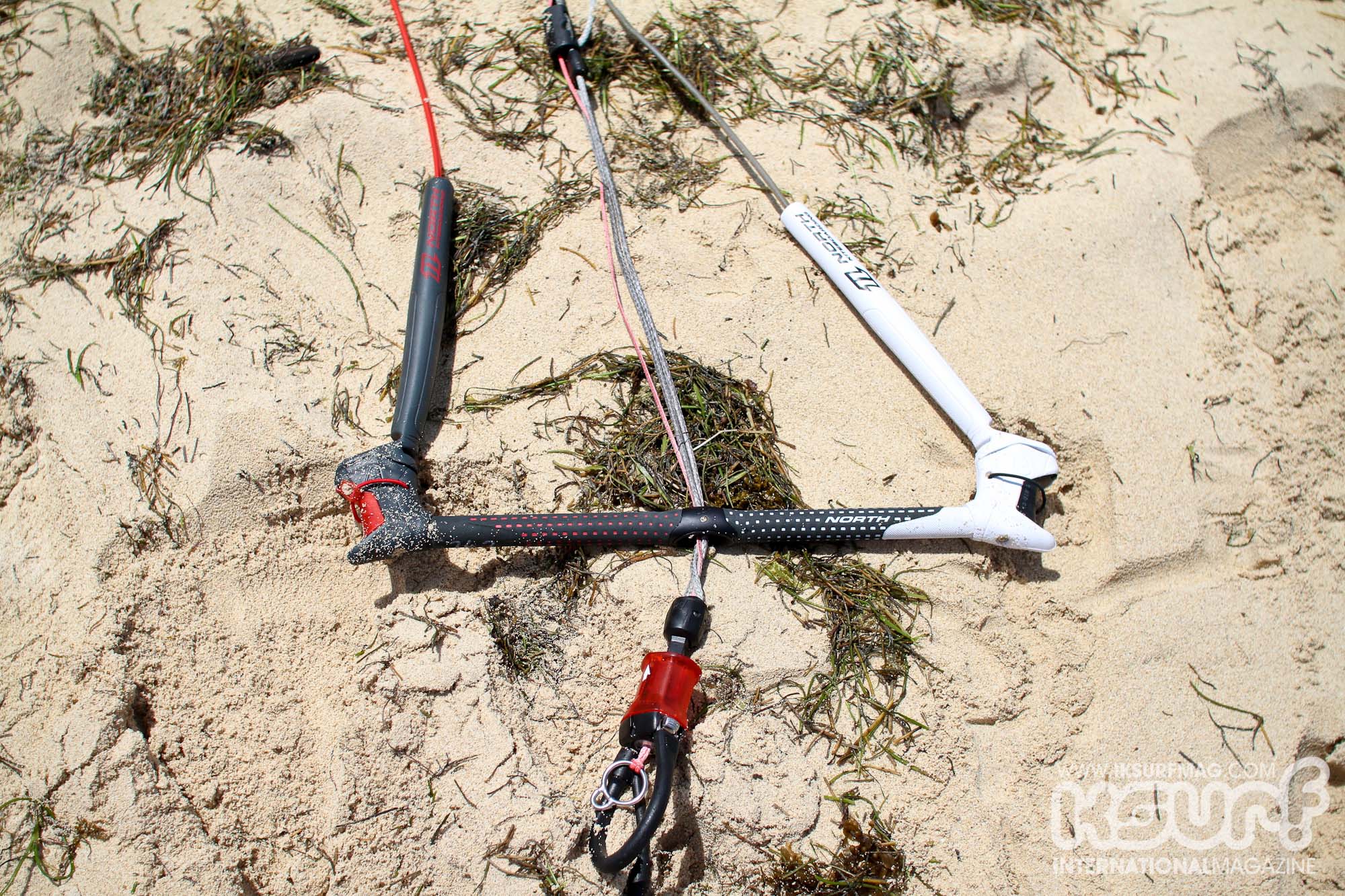