As kite racing was thrust unexpectedly into the limelight this weekend this post seems all the more poignant. As the box rule has levelled the playing field with the board over the last year and with production kites being used perhaps the only place with a bit of room for creativity is arguably with the most important part of the set up. The fins… 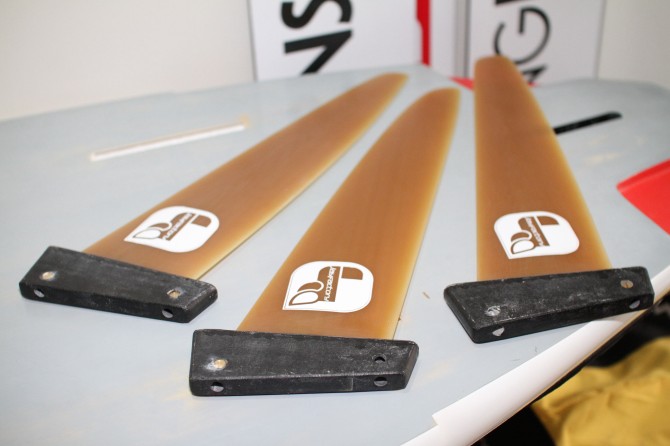 New race fins from Italian firm JayFactory, available in a variety of shapes and sizes for both light and strong wind conditions.

Ever since the very first races kiters have been experimenting with different fin shapes, sizes and configurations. In the early days it was a 2 fin set up, then came the traditional quad fin that dominated the race scene for a couple of years. Offering excellent upwind ability, but putting a fair amount of pressure on the rider to control them, especially downwind. In recent years a tri fin configuration has emerged as being the most dominant, upwind ability is compensated, but larger fins are used to counteract this, downwind is faster, supposedly easier and obviously with 3 fins you have a lot less drag.

Fins work by generating lift and power, the foil shape separates the water as it passes through it and creates high and low pressures just like an wing, this in turn generates lift and allows the board to rise up out of the water onto the plane. Some of the board is still in contact with the water of course, but the drive and lift is all being generated by the fins. Too much lift and the board will become uncontrollable and be skittish on the water as the fins try and lift it clean out of the water. Too little lift and the board will be slow and sluggish and stick to the surface. The faster the fins travel, the more lift they generate and the power increases. Having the maximum amount of fin in the water for the conditions, and being able to control them will make the difference on the race course between winning and losing. 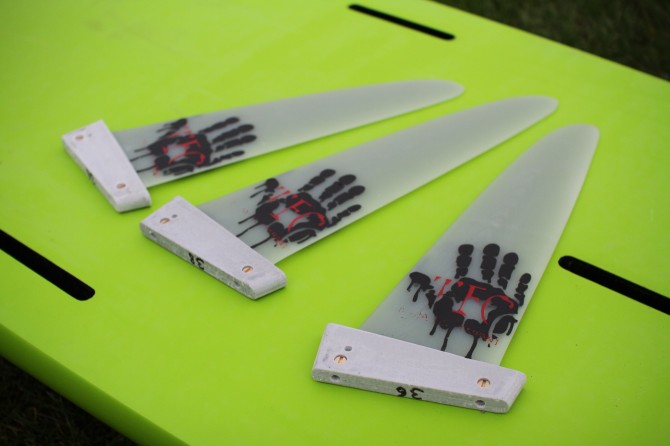 Fins from Bob at the world famous Tarifa Fin Company

The fins of a kite race board have a larger wetted surface area than the board itself, which is why they are so important. an average set up at the moment for moderate winds is two 42cm fins at the front and a 38cm fin at the rear. The smaller rear fin helps with control downwind, the larger front fins offer drive for the all important upwind leg. It has often been argued in kite racing that it is all about the upwind, but in recent years the ability to ride at full speed downwind has really come into play, especially as the upwind playing field has become more level. Riding fast downwind, and not crashing, is an art and having the right fin set up is crucial to your success, just as it is on the upwind leg. 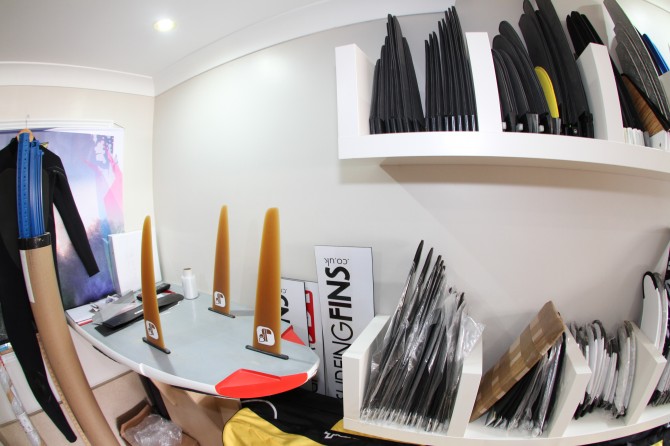 A corner of the office at kitesurfingfins.co.uk they stock a range of fins and can get hold of just about anything for you.

Dave Gollick set up Kitesurfing Fins three years ago, a website dedicated to helping you choose the right fins for your board, and offering you the opportunity to buy from stock as well. He has deals with most of the big fin manufacturers, and if there is a specific fin you are after from someone else then he can source those for you as well. Dave has contacts with some of the best fin manufactures in the world and has devoted a lot of time to learning about the fine art of foils in water. He can help you with suggested set ups, choosing the right brand and can ensure they reach you well packaged and with a fast turnaround.

The website gives you the option to order from stock by choosing the size, cant angle and fin box needed. Dave then processes the order and if the fins are in stock (they hold over £40,000 of stock!) they get sent straight out, if not then he likes to keep the waiting time to a minimum, on average expect to wait a couple of weeks for custom fins.

Choosing the right fins can be a bit of a minefield, but here are some basics to consider:

Size: Obviously the bigger the fin, the more power it will create, but equally the more drag it will produce. It’s a compromise between having the right size and keeping the drag as low as possible. You need large front fins to help the board drive upwind, most riders are using between 38-44cm fins in the front, smaller riders using smaller fins plus smaller fins can also be of use when it is really windy. Larger fins are  more suited for light winds and heavier riders who need more lift. Having a smaller fin at the rear really adds to the control on the downwind leg, and makes the board much more manageable. Most riders are opting for a fin between 2 and 4 cm’s smaller at the rear than the front fin set up. 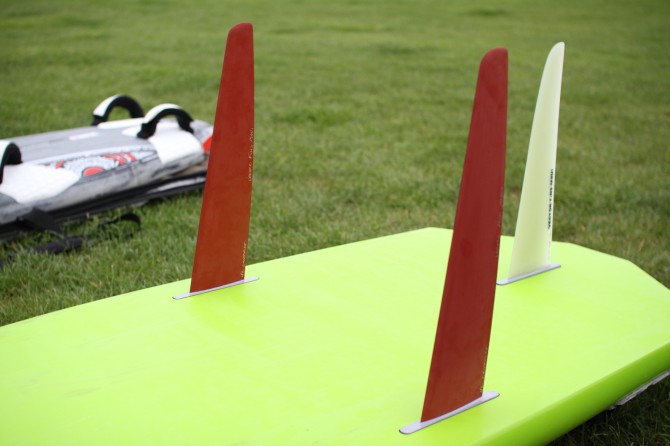 Rake: This terms refers to the vertical angle of the fin towards the for and aft of the board, IE how upright the leading edge of the fin is. A more swept back fin will allow greater control at speed and when gybing. A more upright fin will allow the board to point higher upwind, but as the board angle changes especially when gybing at speed the tip of the fin can overtake the top of the fin and cause it to trip. Again it is a payoff between control and upwind pointing ability. Upright front fins with a low rake of between 2 and 6 are a must for light wind pointing ability. More swept back rear fins with a higher rake will add to your control. 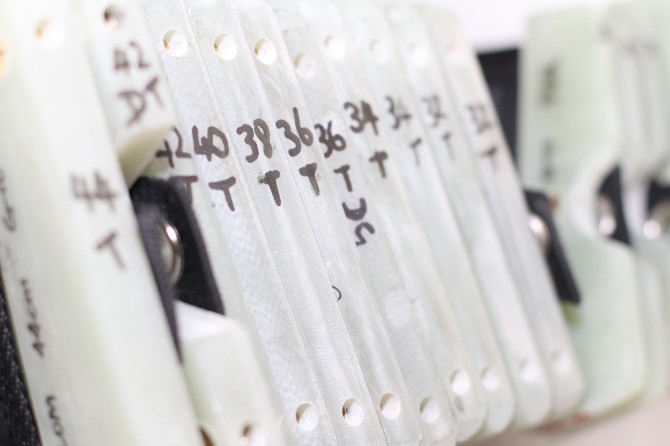 The combinations of shape, size and cant angle are endless...

Cant: The cant is the angle at which the fins point out towards the edges of the board. In years gone by boards had quite agressive cant angles, the old boards sometimes boasting 15cm angles! The Cant angle offers more lift as the fin is working to push the board up out of the water. But equally it loses drive when you push against the fin as it is angled. There is no definite winner in terms of cant angle at the moment, it depends on the board being ridden and the rider. Certainly nothing more than 5 degrees with a modern set up is needed, 3 degrees is probably more favourable as it offers good lift and drive. In lighter winds and for heavier riders cant angle can help to promote early planing and lift. Stronger winds the fins will be powerful enough to not need it.

Box: Most modern raceboards use a Tuttle Box, which thankfully has become a standard, so your fins can be used in your new board next year or whenever you upgrade. We have a limit on the maximum size of our fins, which is 50cm according to the box rule, after about 46cm you are getting into the realms of needing a deep tuttle box, which gives the fin a stiffer connection to the board. We haven’t gone down this route yet in kiting, so for the moment, Tuttle is the way to go if that is the box your board has. 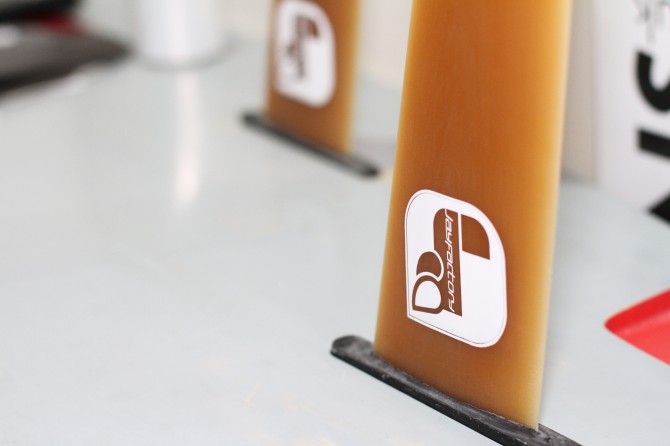 The surface finish on a fin is critically important to ensure good water release.

Other Factors: There are many other factors that go into making the perfect kite racing fin, stiffness, flex, leading edge and trailing edge finish, surface finish etc. But these are all elements that a good kite racing fin manufacturer will have spent countless hours testing and developing to offer you the best performance, so don’t worry too much about it yourself, trust the shaper is doing a good job!

Lastly and this goes without saying really, it is no use spending upwards of £500 on a fin set up if you then mistreat them and smash them of some rocks! We never launch our race boards until we are at least in thigh deep water and have asked about under water hazards if we are riding a new spot. It’s just not worth it! If you do ding your fins, you can reshape them but of course once reshaped they will have lost some of the shape and size that they had before. If you treat them like they really are made of “glass” and be careful then they will be well worth the investment!

Dave at Kitesurfing Fins ships worldwide and can help you choose your perfect set up too, he also sells fins for surfboards and twin tips. Click Here to check out the site.

Day 2 at the PKRA Race and Freestyle event in Turkey