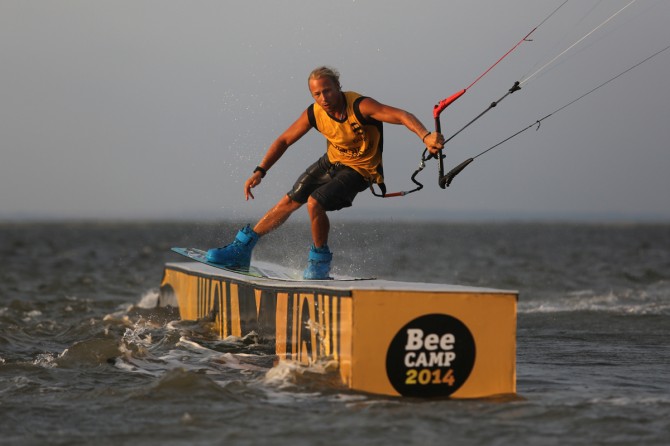 The BeeCamp Rail Masters isn’t your average kiting competition, in fact there’s nothing average about the entire Beecamp event which includes a huge 8 day long music festival, course racing and a freestyle competition thrown into the mix as well as display events and taster sessions for skimboarding and wakeboarding.

The recipe for the Rail Masters is simple; take 20 of the world’s best slider and kicker riders, run them head to head against each other across a crazy course packed full of features that you’d expect to see at any top class cable park and there you have it- the BeeCamp Rail Masters. This year’s judging team is headed up by Brian Wheeler of Triple-S fame, aided by local Russian judges Egor Morozov and Max Khodos. We think the judges must have been partying too hard after the event as we haven’t received the final results yet- our kind of event. 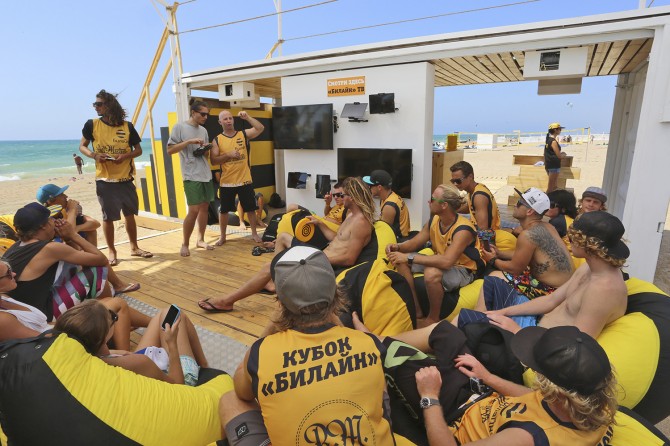 15th August.
The first day included rider registration which saw 17 male and 2 female riders sign up for the Rail Masters. With fair winds in the riders favour they were allowed to test the park for the event and under the careful guidance of riders and judges the final arrangement of features and obstacles in the park was tweaked to offer riders the best chance of hitting the most features in a single loop to help them unleash their creativity and score maximum points. Qualifying lots were drawn in preparation for the competition starting on day two with riders being split up into three groups for the initial qualifying session. The event is to be held over 4 rounds with first round riders getting a second chance to pick up a pass to the second round in a head to head. 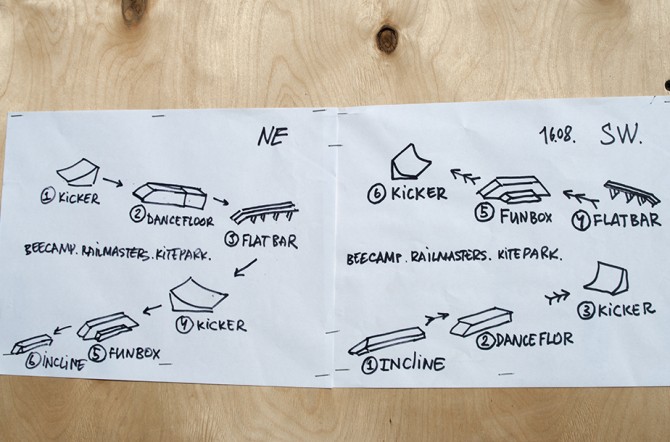 16th August.
Disappointing wind on day 2 of the event lead to the organisers postponing the start of the competition. Poor and gusty southerly winds allowed riders to put on a little show for the event guests and members of the press core. A few last minute alterations were made to the layout of the park in preparation for the forecasted wind direction for tomorrow. 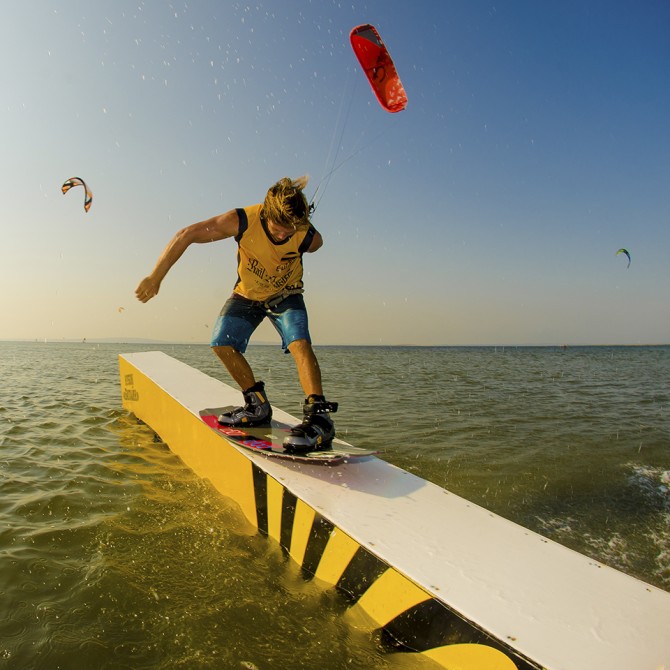 17th August.
With the expected wind not delivering once again the park features were prepared for the predicted northerly winds due in tomorrow. Excited kiters need something to do with their idle hands so we all went over to the main festival area to test the Beecamp skim boarding pool. Take an oversized paddling pool, some sponsor supplied skim boards and a group of excited natural show-offs and you have all the ingredients for a frenetic afternoon of skim related one-upmanship. The riders put on a great show for the crowds and enjoyed themselves hugely. After the skimboarding many of the Rail Masters competitors decided they would also take a stab at the freestyle competition and enrolled for the following days heats. 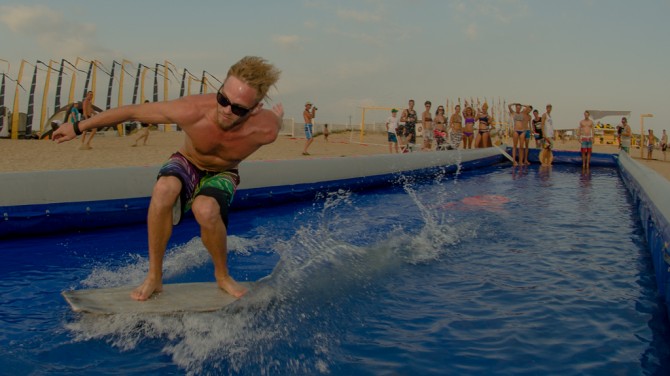 August 18th.
With plenty of wind the organizers decided to rush straight into the freestyle competition, and with so many of the Rail Masters competitors double booked for both events we put the jibbing on hold for another day. 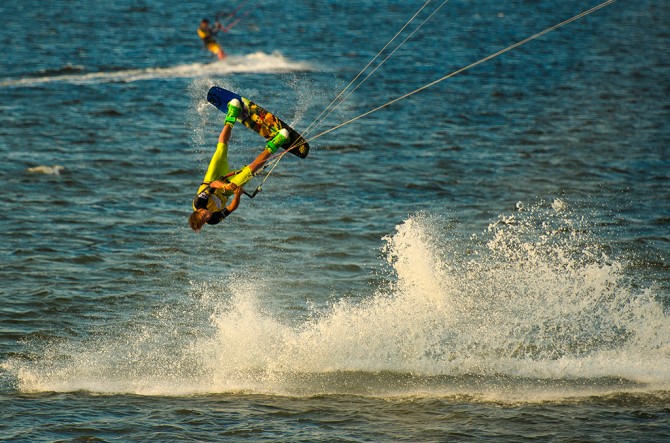 August 19th
The organizer crew decided to start the pro kite freestyle competition today and put the Rail Masters on hold for tomorrow, due to the weather conditions looking even more promising for day 5. 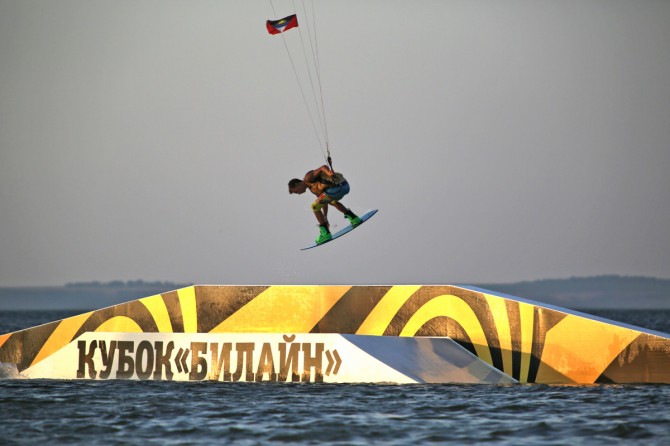 Many riders from Rail Masters decided to take part in the freestyle competition in which the spectators had the opportunity to enjoy freestyle sessions from the best international riders, whilst the riders had a nice chance to get in some training on the water before a tough competition day to come, as tomorrow the weather is looking promising for a big day of jibbing heats. 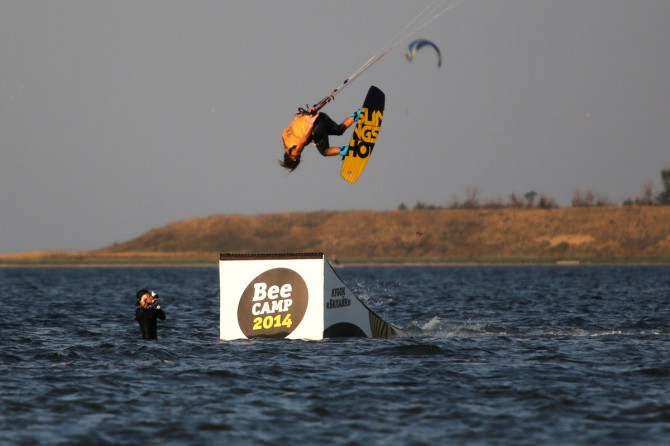 Sergey Borisov beat Artem Garashchenko in the single elimination final in the professional category to come in first place. Borisov impressed the judges with a wide variety of tricks all executed solidly, with power and with the kite held low. Both competitors rode at a similar level for much of the day but Garashchenko began to tire more quickly as the day progressed and was beaten by an on form and more resilient Borisov. 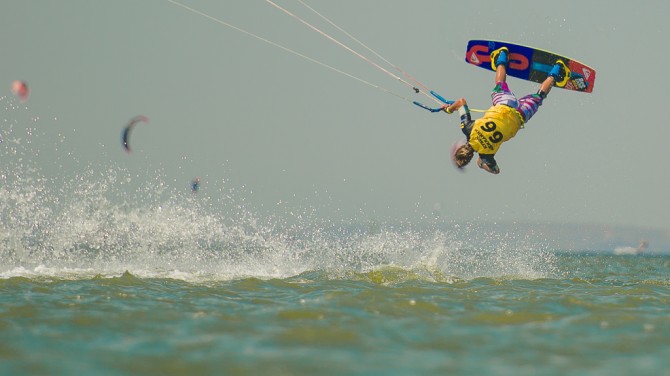 20th August
The wind gods almost smiled on us today and with the freestyle over all riders were available for the Rail Masters. 14 heats were run in above average conditions allowing us to almost complete the qualifiers, though we missed out on the 2nd round of heat 3. Though the fans might not have seen the best of what jibbing offers, everyone got to ride and spectators enjoyed some pretty damn good riding. 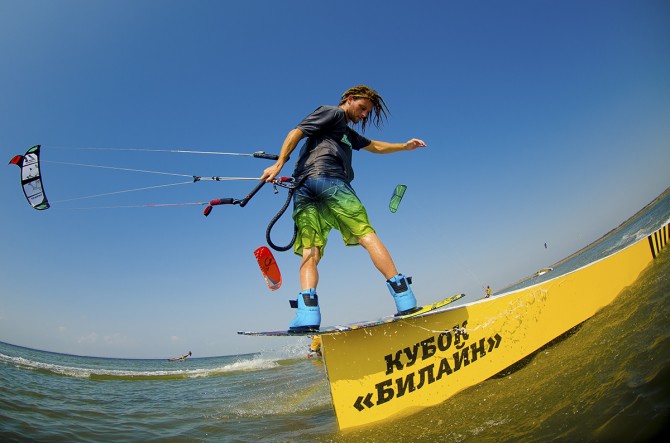 21st August
Once again this morning we gave way to other events . Men’s and Women’s course racing titles were decided as well as the female women’s amateur freestyle. In the men’s race Sergey Zaykov battled on ahead of rivals and went one on one with Maxim Chugunovsky for most of the race. In the end Maxim prevailed taking 1st over Sergey in 2nd and Alexander Kuraev in 3rd

In the women’s freestyle after a hard struggle Victoria Soloveykina bested Natalie Begnazarova. Natasha showed very beautiful stylish riding on a high professional level, and it is noteworthy that even the elements performed with interceptions that have demonstrated only Soloveykina. Third place was taken Antokhina Elena from Moscow. 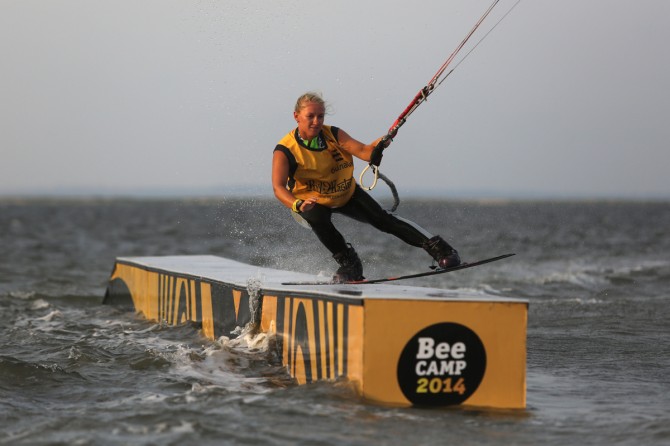 During the afternoon the wind levelled out and under the rules of the competition, each of the riders is allowed two runs. The start was made almost at sunset, so the riders had time to make only one pass. According to the results of the day, in the finals tomorrow will be: Artem Garashchenko (Russia) Toby Hölter (Germany) Craig Cunningham (UK) Sergey Belmesov (Russia) James Boulding (England) Eric Rienstra (USA) Also 2 girls: Olga Kontaryova (Russia) Victoria Soloveykina (Russia) The finals will take place as soon as the wind conditions allow. 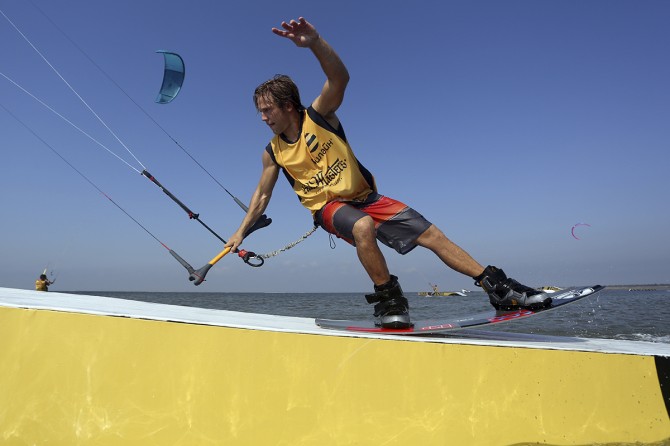 22nd August
If you wish hard enough you get what you want in the end. As we had hoped the no wind forecast was not justified. After lunch, the wind blew strong and long enough to allow not only the final, but jibbing session for the best trick prize as well. Chief referee Brian Wheeler holds the cards close to his chest, winners will announced during the final awards ceremony which will take place on the main stage August 23rd. 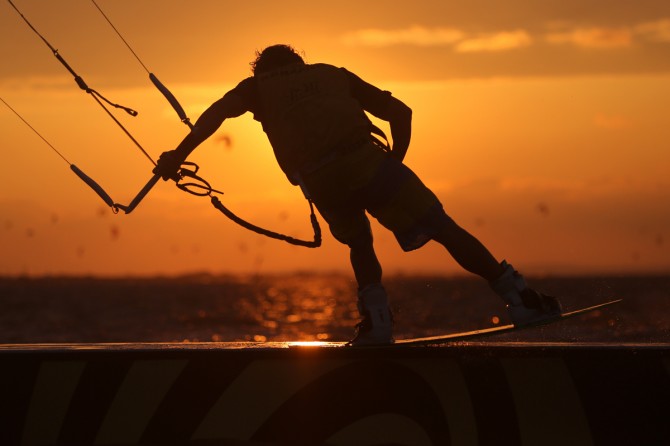 DaKine and Cabrinha Unite Under One Roof

Best Video of 2020 [Nomination] - FIRST 50KNT SESSION OF THE SEASON