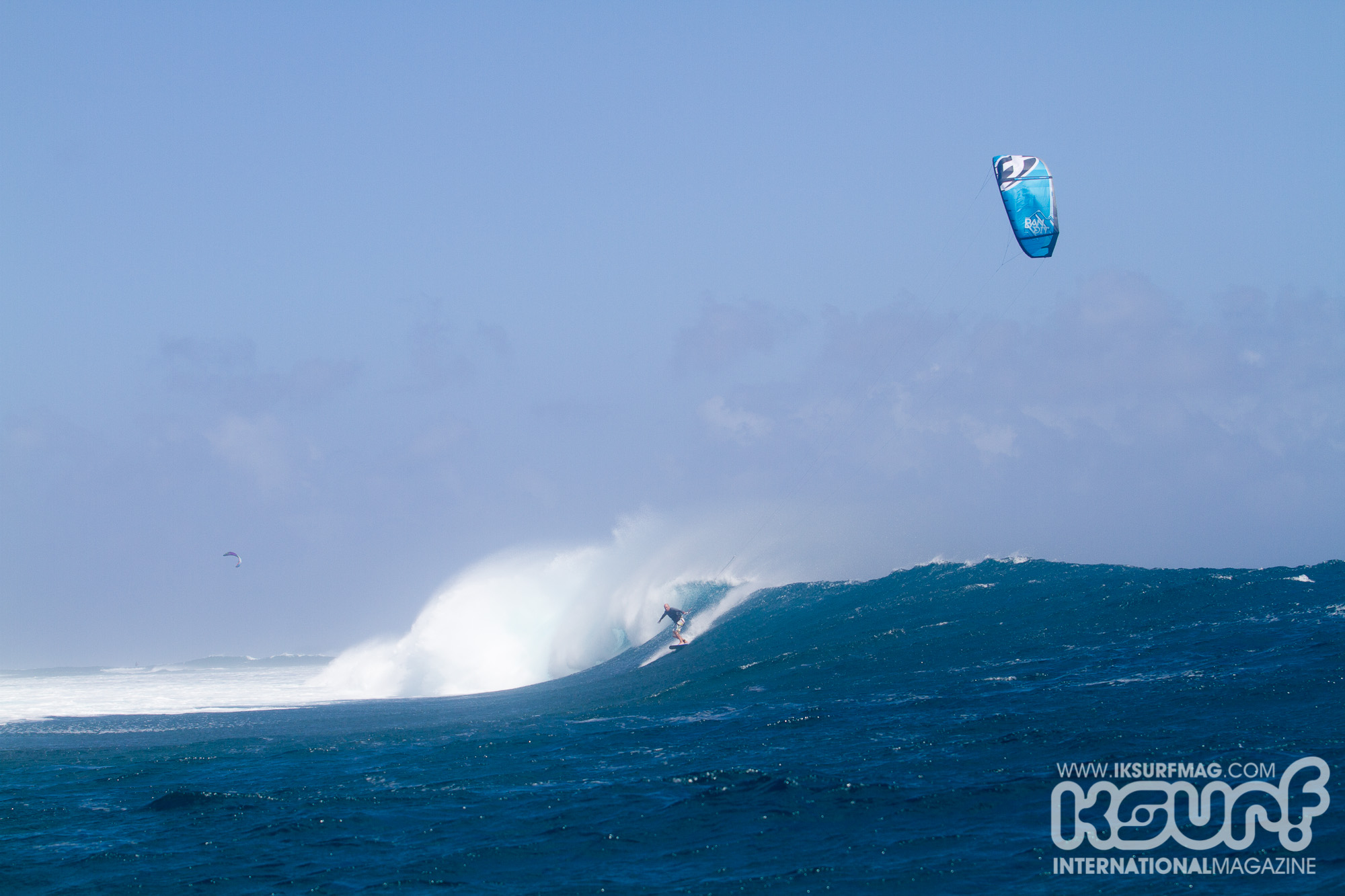 In the waves you don’t even think about the kite… Photo: Stefan van der Kamp

The Bandit is a kite that garners a lot of attention, and deservedly so; there are thousands of riders all over the world who love the flagship of the F-One Brand. 7 years ago it was the kite that transformed kiting, and F-One; the Delta concept was a totally new idea and it instantly gained fame on the kitesurfing scene. 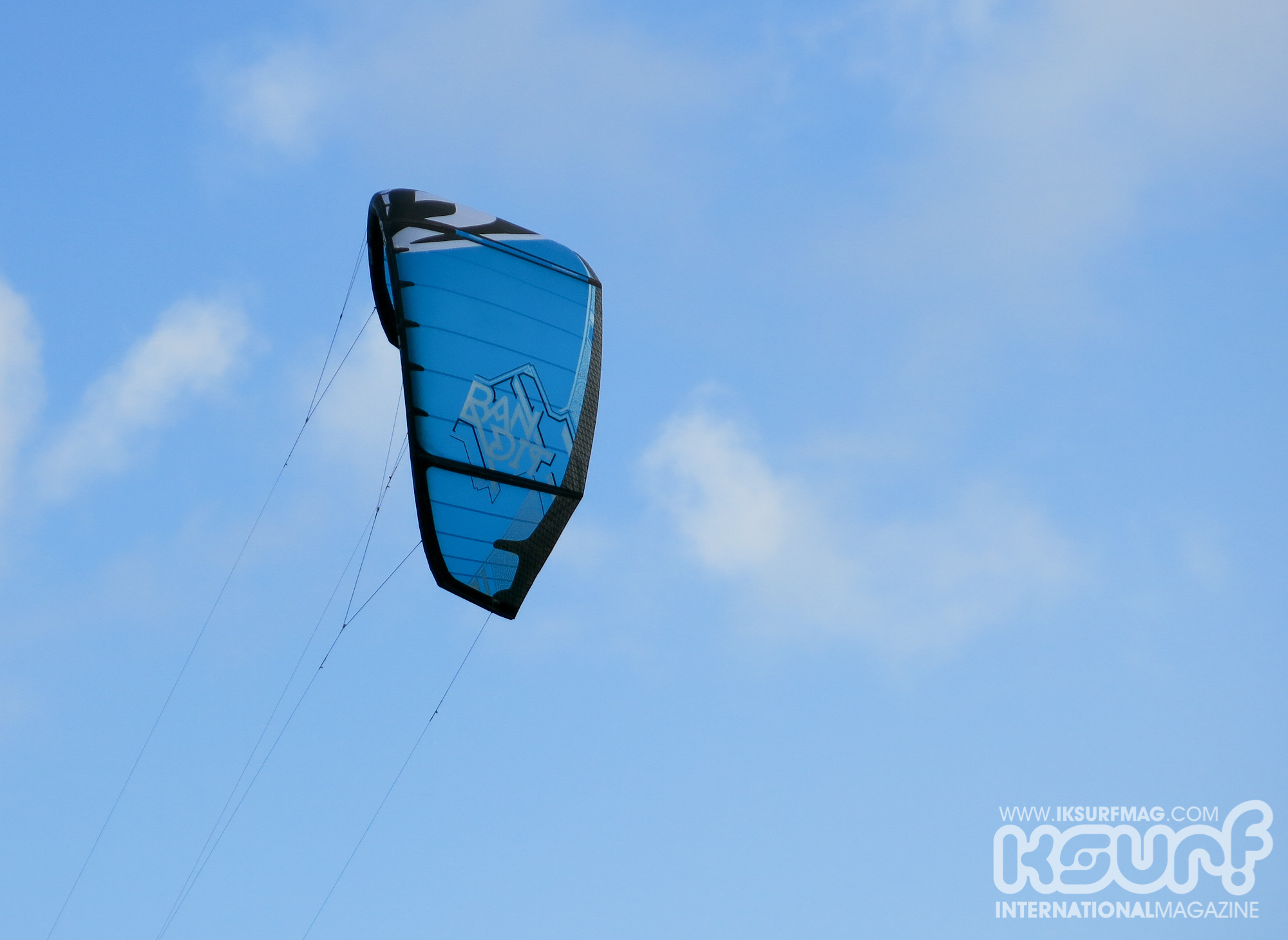 Over the years the team at F-One have tweaked it and changed it and to look at the Bandit 6 verses the Bandit 1 you would be forgiven for not thinking the two could have ever been linked. Last year the Bandit 6 was one of the best kites on the market, how exactly do you go about improving something that isn’t broken? 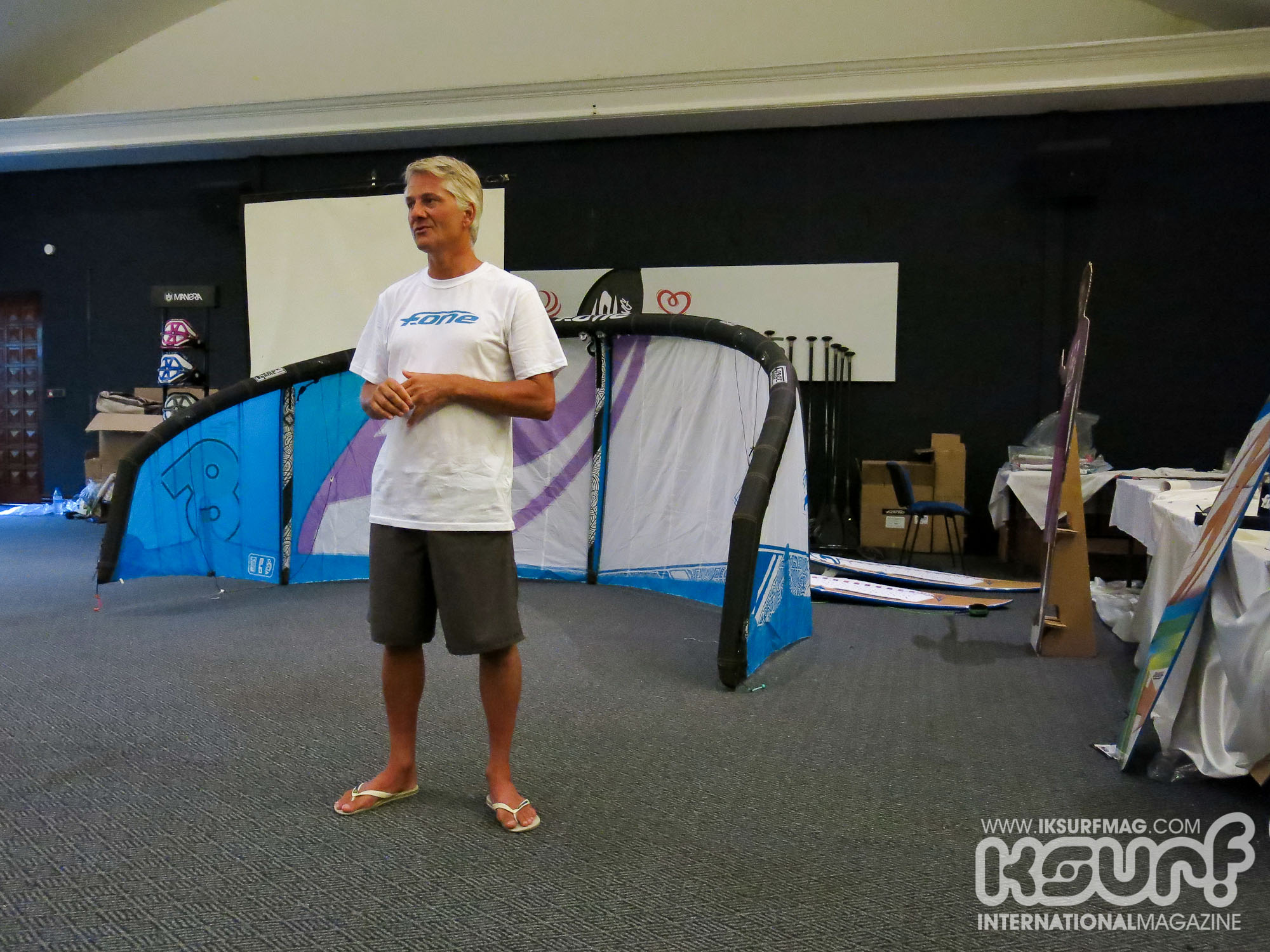 Raphael Salles talks us through the new kite…

Raphael Salles, Mika Fernandez and Kite Designer Robert Graham have been on hand all week to explain exactly what they have been up to. At first glance the Bandit 7 might look very similar, but the 7 is a totally new kite and not just a refinement of the 6. When Robert Graham joined F-One the team upgraded their kite design software, unfortunately the old design of the Bandit 6 wasn’t compatible, so they really did have to start from scratch.

Of course they used all the knowledge and experience they have gathered over the years to create what they call the best Bandit ever. The testing process is always extensive with F-One, led by Raphael and Mika over 80 prototypes were created and thousands of hours were logged on the water. 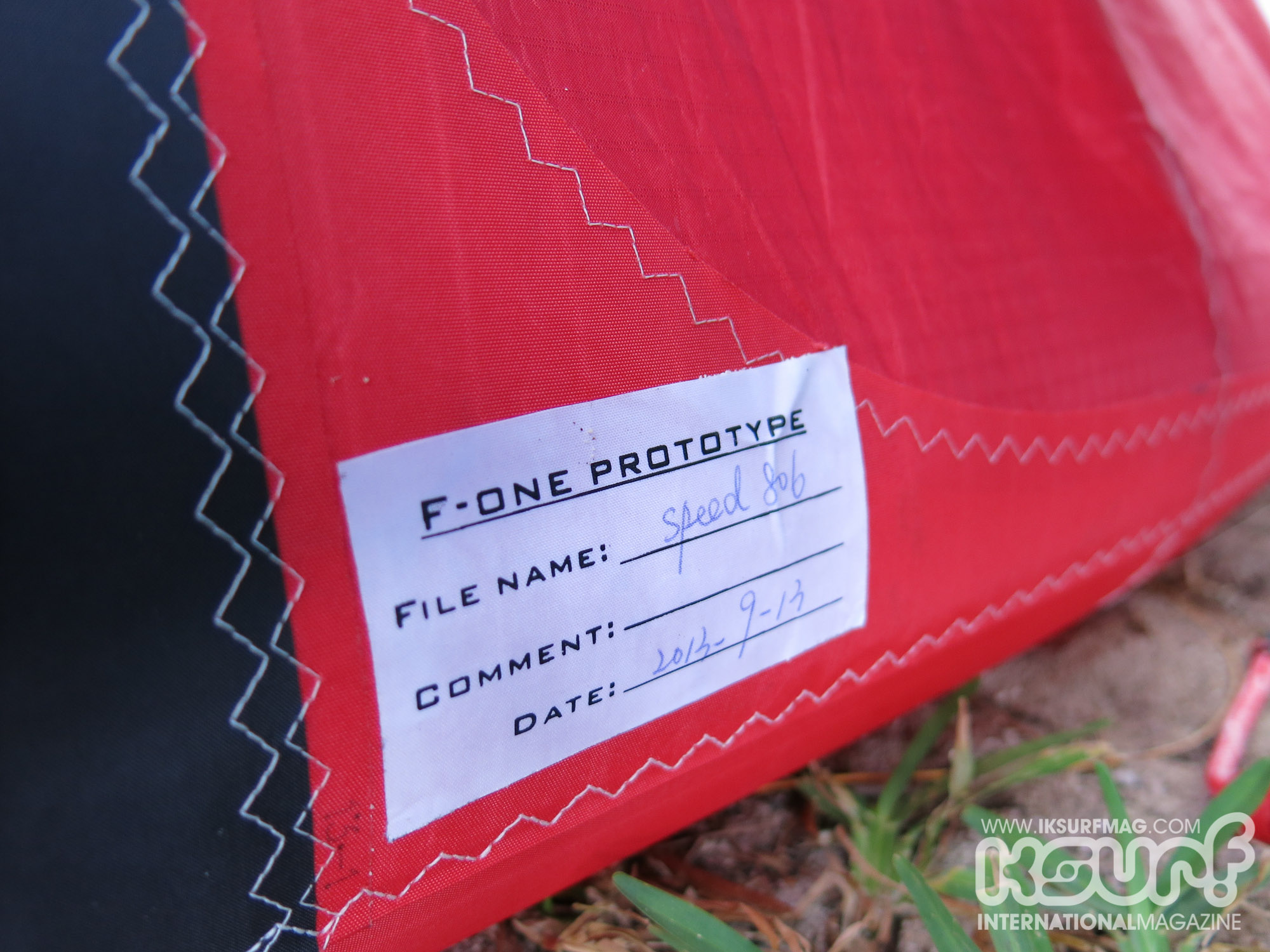 F-One never stop testing, they even have prototypes here for 2015!

The goal was to improve the low end of the kite, and also the high end. Raphael understands that kites are becoming more and more expensive, so by giving the Bandit a bigger range you can have a smaller quiver and save some money.

F-One also started to use the new Technoforce fabric from Teijin. The fabric is stiffer and stronger and has less stretch. Initially they made a Bandit 6 in the new material and found that it wasn’t working so well, the profile of the kite wasn’t quite right as there was no give or stretch in the new fabric. The high end of the kite was really good, but they had lost power at the low end, and the kite also lost some of it’s feeling. 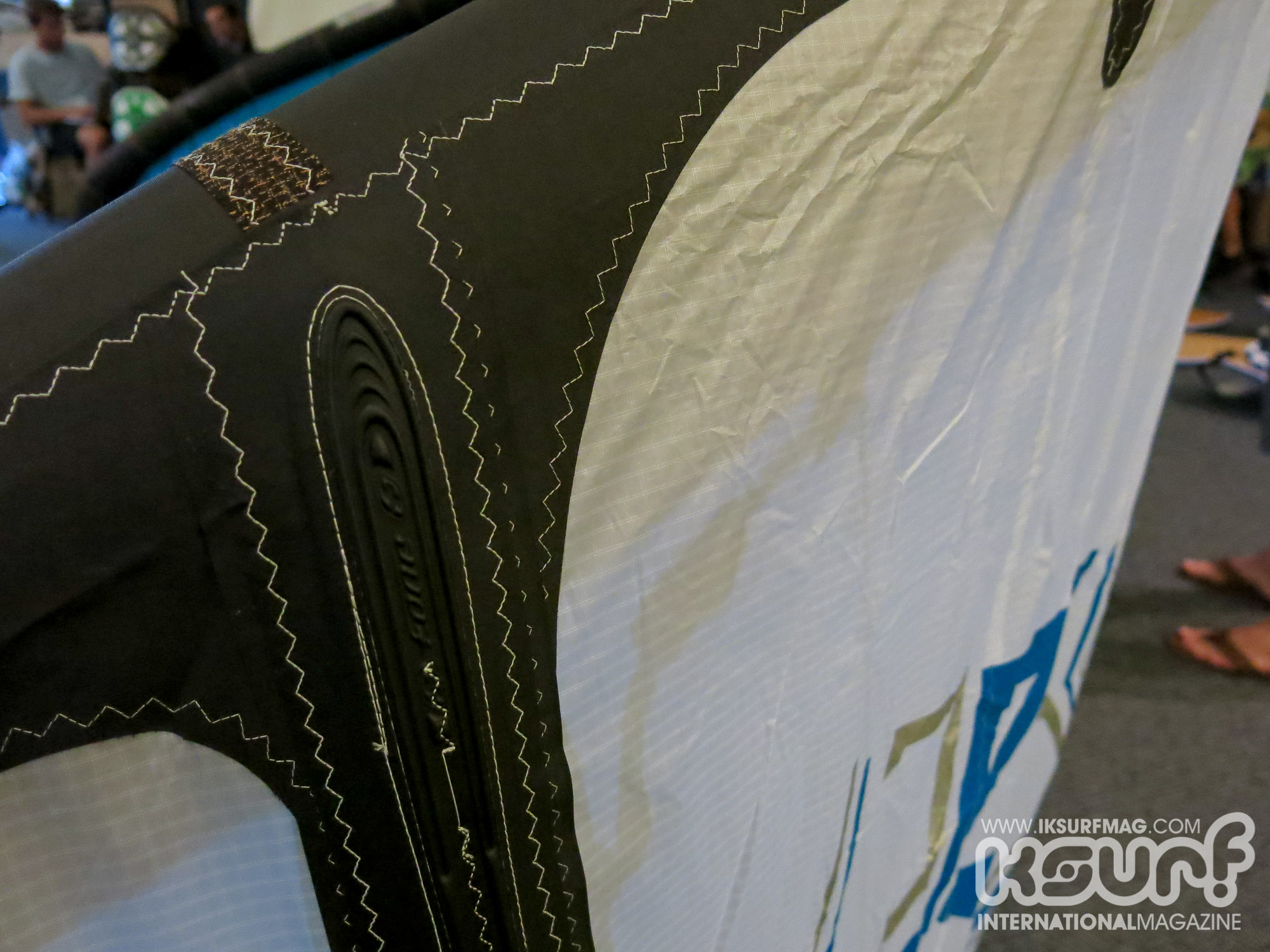 Close up of the more curved Force Frame and new Technoforce fabric from Teijin.

The new designer, new fabric and issues with the software afforded the team with the perfect opportunity to start afresh with the Bandit 7. Having Robert join the team also brought some fresh thinking and allowed the guys to adopt some new ideas. Mika, Rapahel and Robert did all the testing on the new kite, Robert is also a good kiter so he was able to bring his input into the testing process too.

They reworked the tips of the struts to improve the air to flow over the kite, the profile of the kite was also changed too, to accommodate the Technoforce fabric. 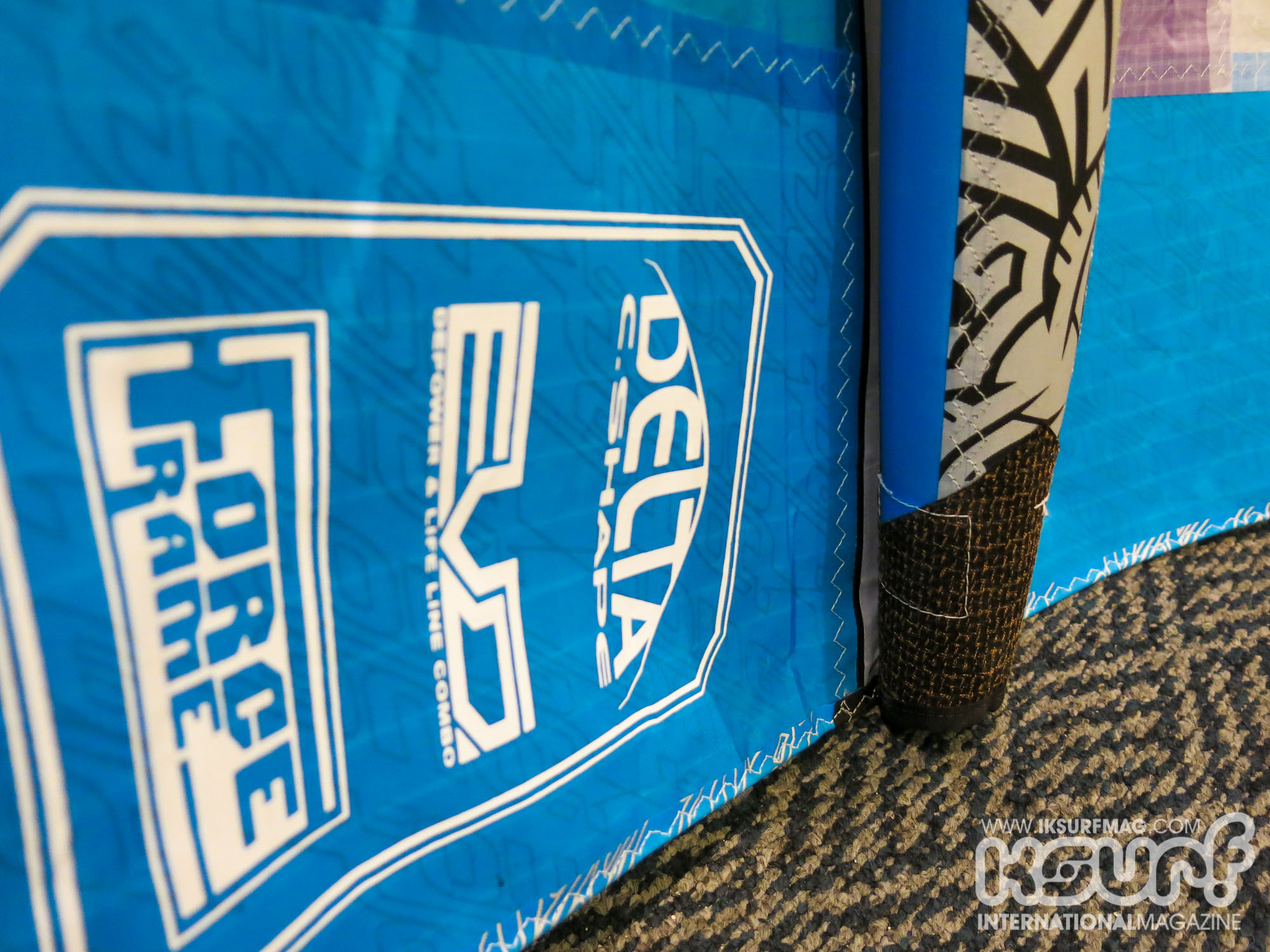 The outline and strut positions is the same as last year but the one pump placements have been changed to reduce wear on the canopy. This means that the old bladders won’t fit the new kites, but the advantages make it worthwhile. 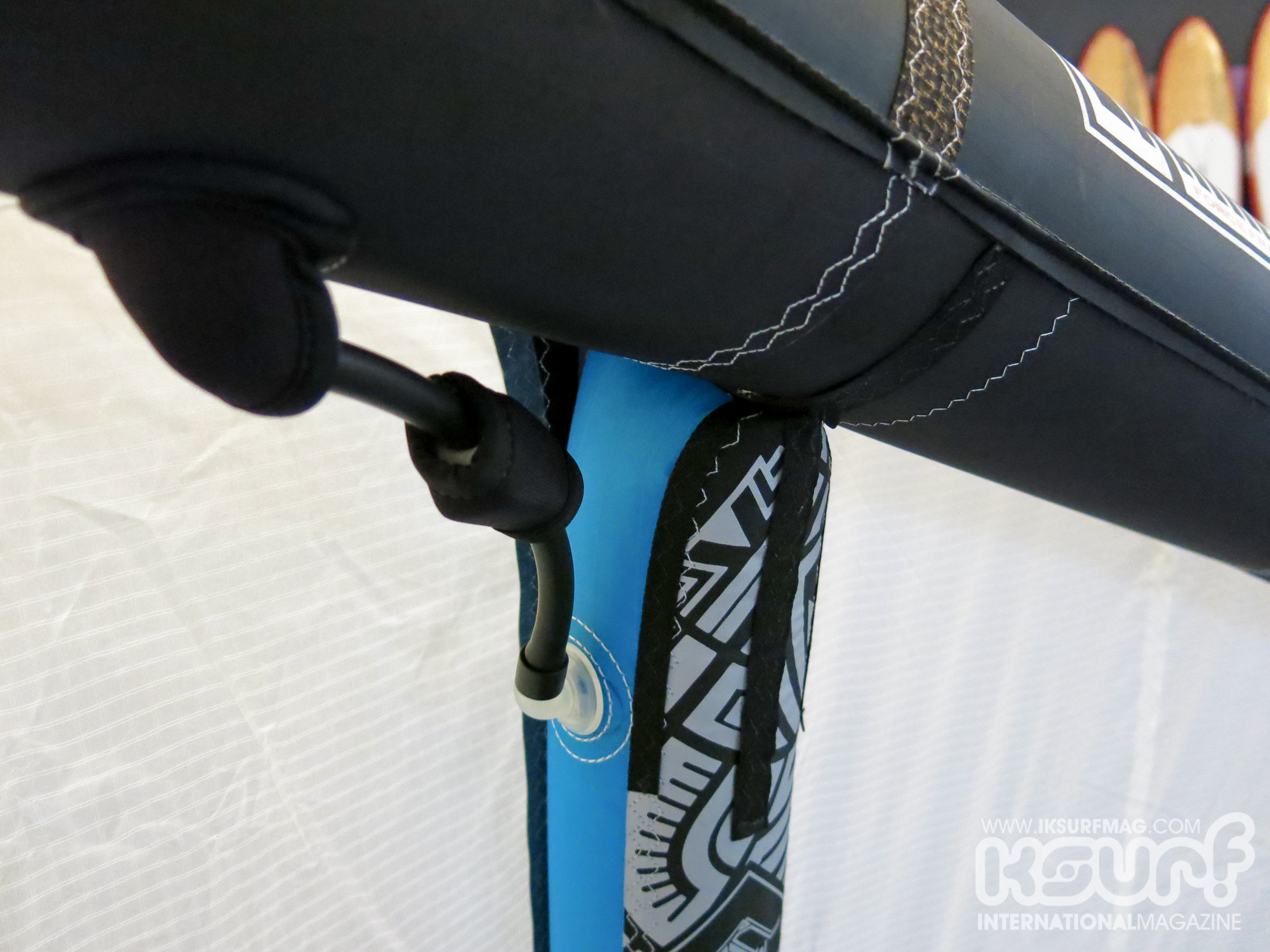 The kite uses two pulleys on the bridle, some companies are moving away from pulleys but Robert gave an excellent demonstration of how the pulleys enable the kite to move by itself according to the gusts. Effectively allowing the kite to have a wider range and keep it’s shape and profile constant. In testing they rode the 9m kite in 12knots with the Fish surfboard and stayed on the 9m all the way up to 45knots! Obviously the team don’t recommend this, but it was interesting to test the extremes of the kite. 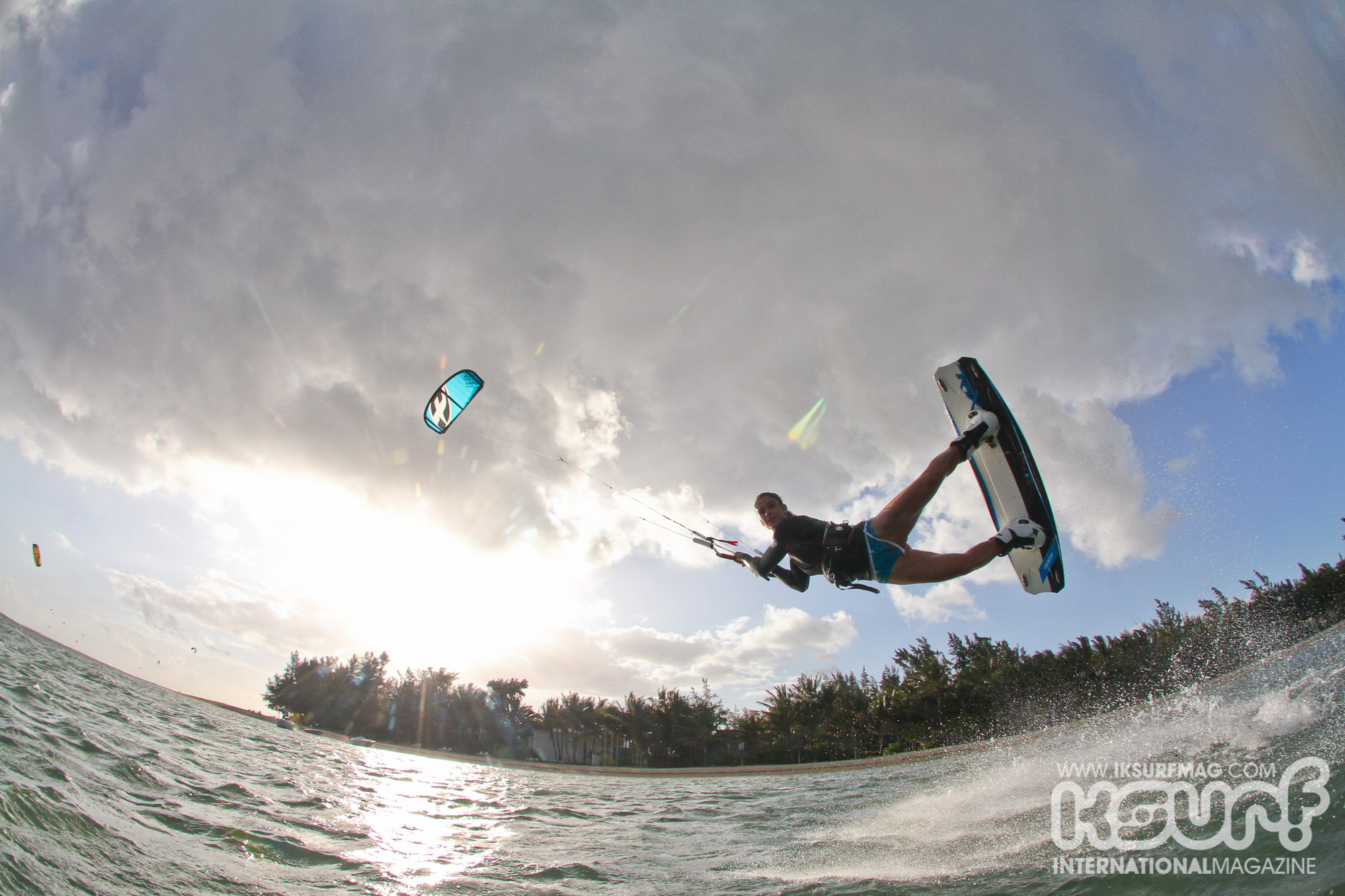 The new Bandit has a very similar low-end range to last years, but the bar feeling is more direct, especially when sheeted out. We rode the Bandit 6 and Bandit 7 9m back to back to check the differences. The new kite feels much more stable in the air, especially when it is overpowered. The high end of the new kite is really where you notice the biggest difference. The new fabric makes the kite rock solid in the air. 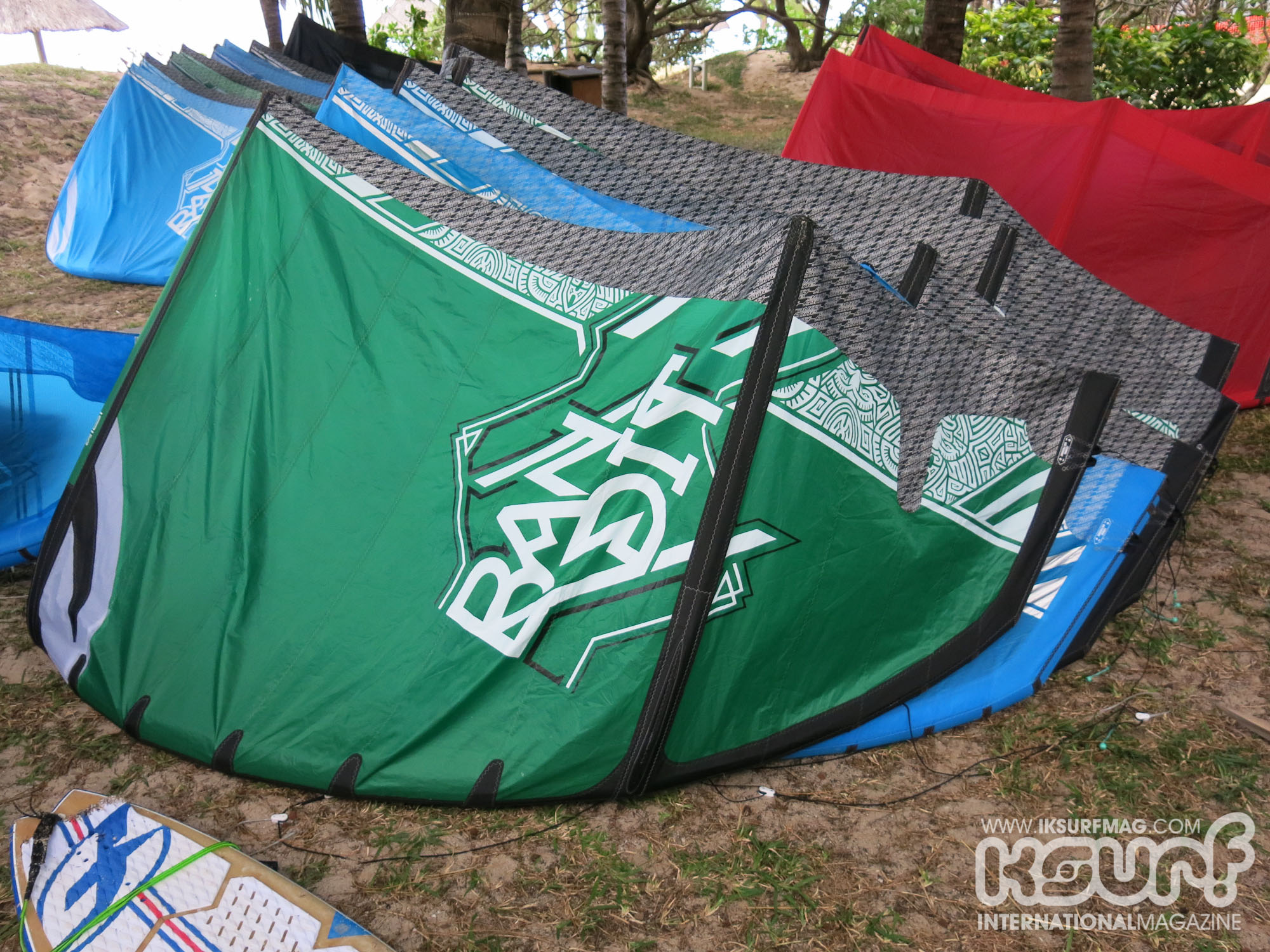 Plenty of kites here to test!

When jumping the new kite pulls much more vertically, so you get high jumps without too much downwind drift. They have also worked on reducing the lateral pull in the kite. This means the kite pulls forwards more at the edge of the window. For the rider this means you have a more comfortable ride without wrestling with the kite. 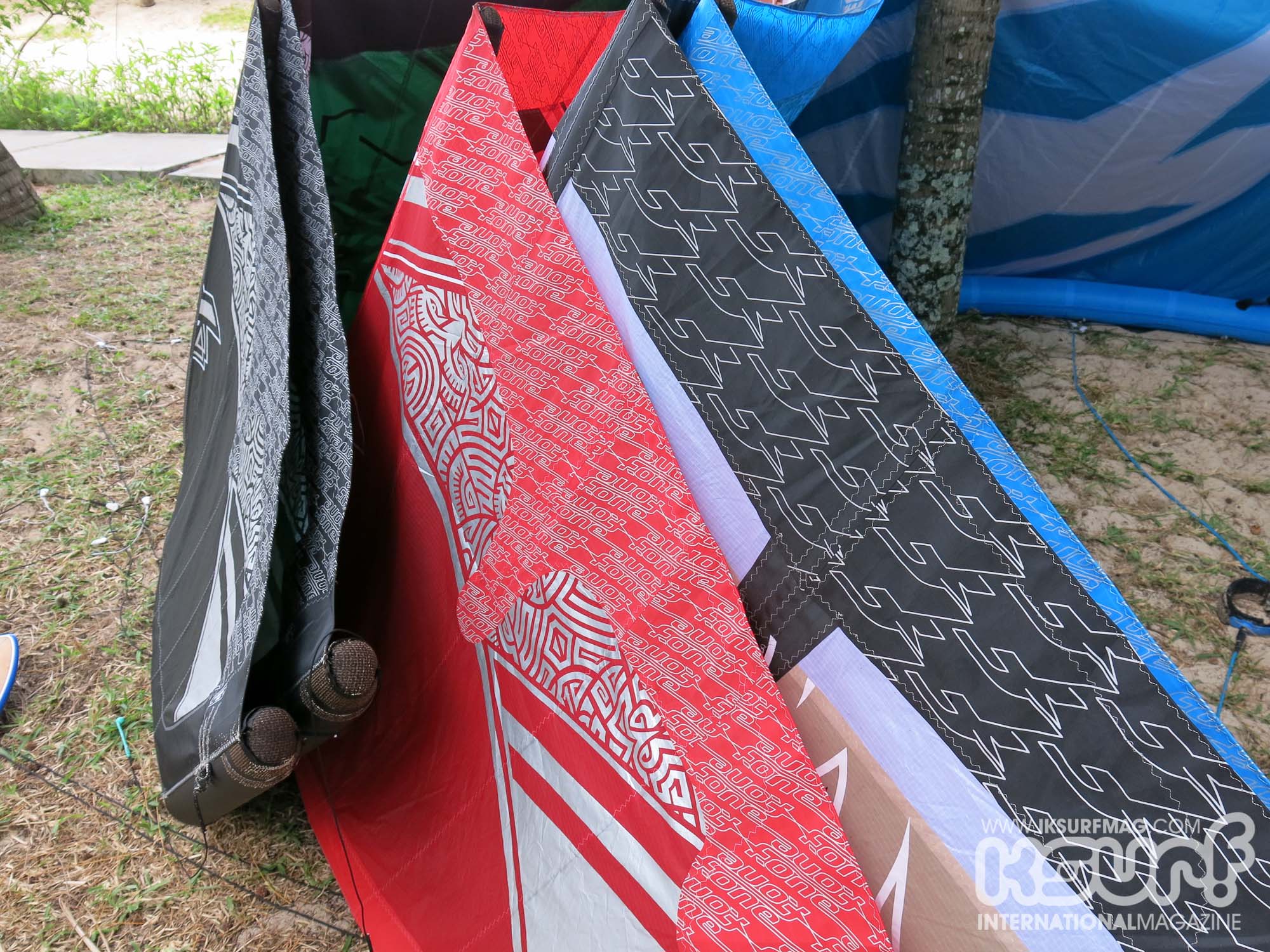 The attention to detail and build quality is exceedingly high.

The large F-One logo has been stitched into the canopy so it can be seen from both sides. With a black kite the logos couldn’t be viewed from the other side. By stitching it into the canopy the new kite stands out more on the water. 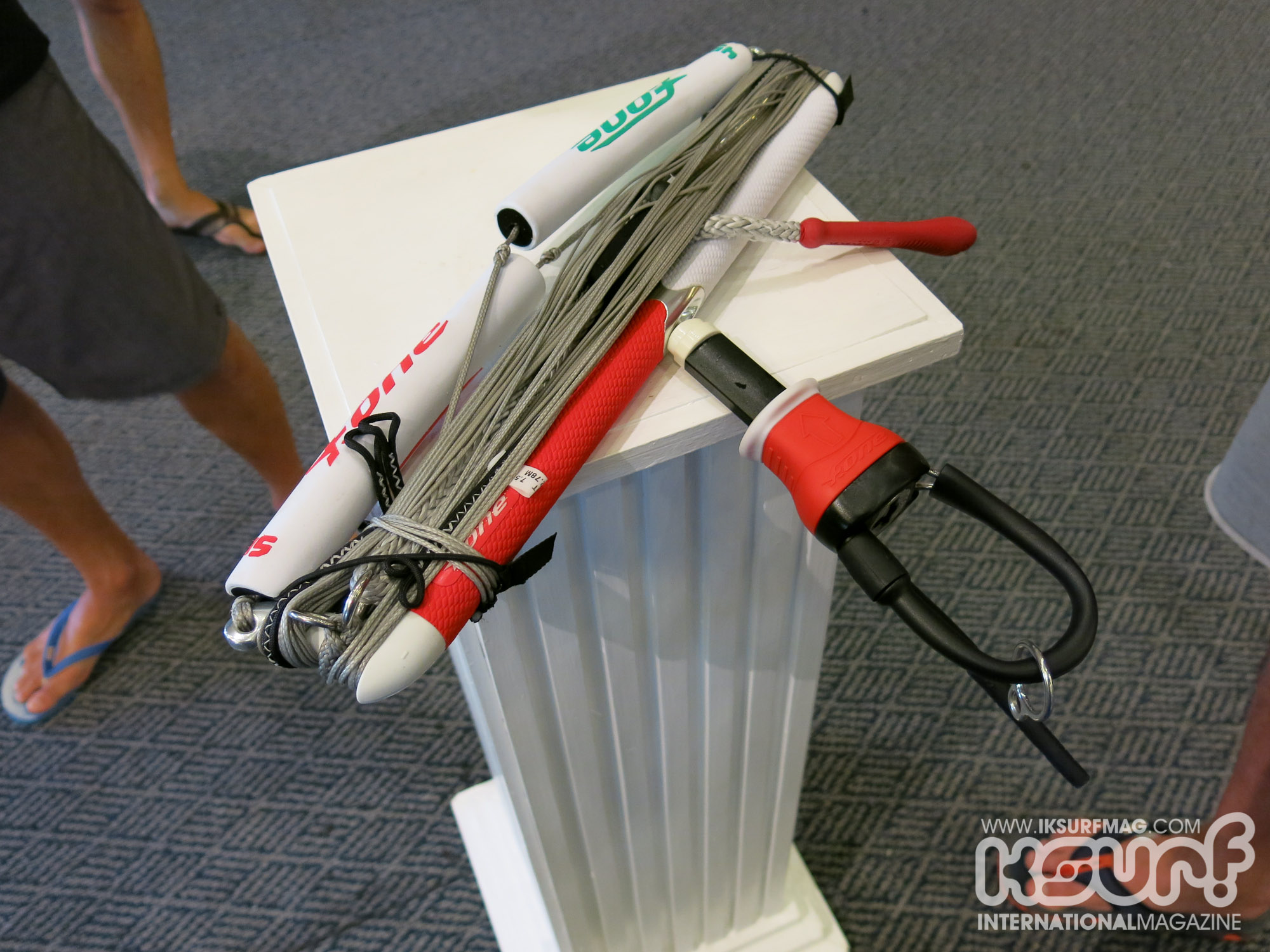 We’ll have more about the bar in our next update…

We’ll be putting a full test in the next issue of the magazine, but we’ve thoroughly enjoyed flying the new kite and it definitely is an improvement on the very good Bandit 6. The new fabric really keeps the canopy solid in the air and delivers a more consistent feeling at the bar. The top end and range is really impressive, at 75kg I’ve been riding the 8m most of the week and been on the water when others have been on 12m kites right the way through to 7m’s.