Loves: Life, it’s super exciting if you let it be! 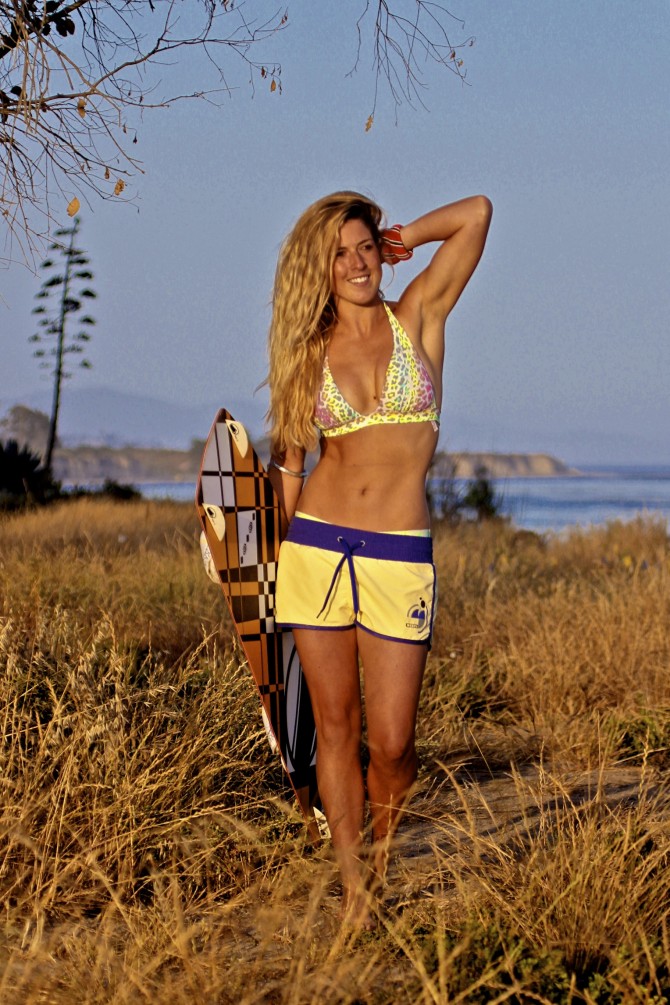 Kenya is a good place to work on your tan...

You definitely aren’t the “average” kite surfer, I hear you are chasing lions and the Maasai in Africa right now, can you tell us a little bit about what you are up to?

Well growing up in East Africa made a love of wildlife easy and spending as many days amongst it in bush with nothing but the bare necessities became a favorite past time. I am currently filming my first solo documentary, it’s an incredible story that I am trying to tell about how the Maasai are living with lions on the Kenya/Tanzania border, based on a project called ‘Rebuilding the Pride’… On a personal level it couldn’t be better as I get to hang out with this fascinating tribe, who I am humbled by everyday and spend my mornings and evenings with lions, it’s my ideal situation really!

How did you get into TV?

I did a show for the BBC called Last Woman Standing where I lived with 6 different remote tribes around the world and was given a week to learn, train and then compete at their local sport, so from water buffalo racing in Sumbawa to a 50kg log race in the Amazon… There were some crazy moments but I was fortunate enough to live with people who taught me so much and I have them to thank for many of my perceptions on life today. 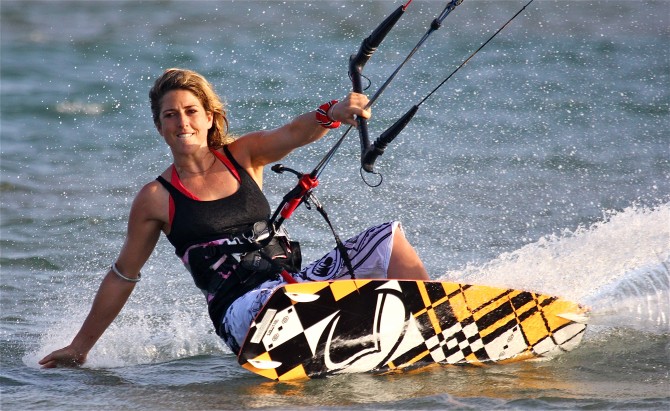 How did you come to live in Africa, were you born there?

Yup, born and raised… I read a recent poem that ended with “white skin and an African Soul” … It’s a great country to have grown up with and we are spoilt with the best of both beach and bush!

What’s the kitesurfing like in your neck of the woods?

AMAZING. Kizingoni Beach on Lamu island is hands down my favourite place to kite! 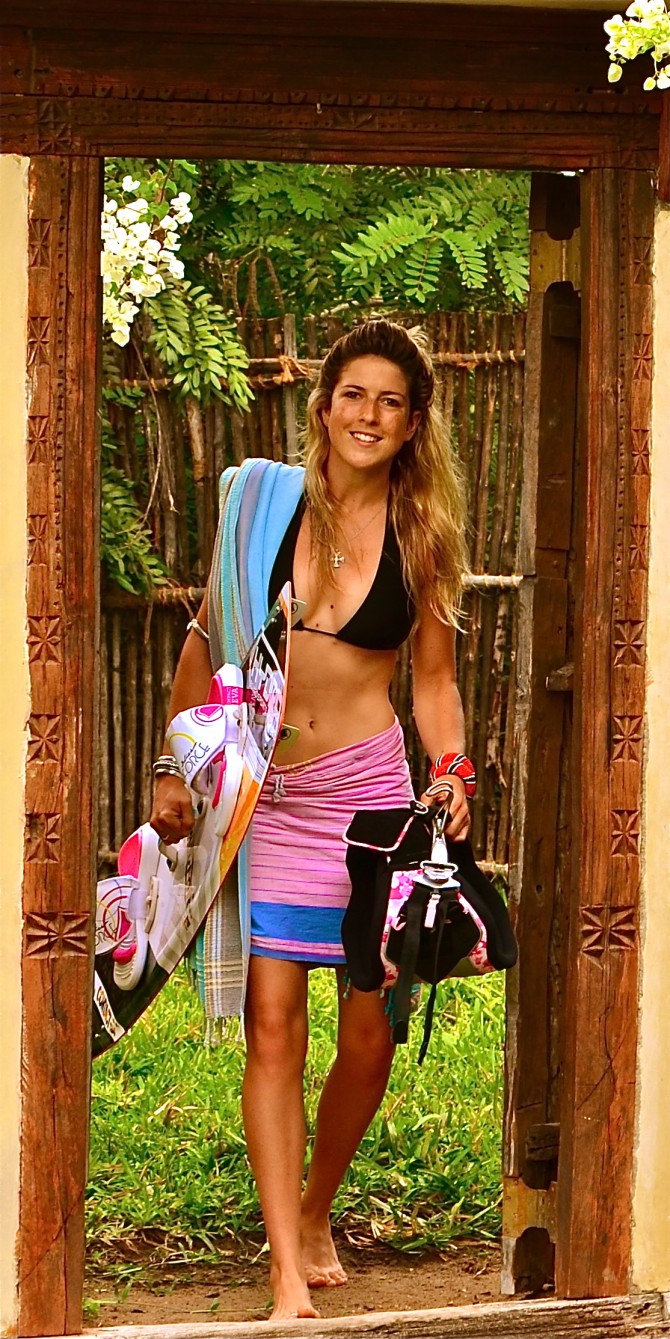 You forgot the kite Anna!

You attempted to kite on the worlds highest lake, can you tell us a little bit about that?

I wanted to raise awareness for the elephant and rhino poaching in Kenya, so decided to climb Mt Kenya and try kite it’s highest lake, Lake Michaelson at 4000m. The wind wasn’t quite on our side sadly, but it definitely is possible and I have by no means given up! The lake is enveloped by cliffs apart from one small slither of land, imagine the ultimate infinity pool.  I have just got to wait for that magic moment where wind funnels through that gap, I actually like that I couldn’t do it first time, if it was easy everyone would be doing it and it makes the challenge that much more enticing to me!! I will try again this Christmas, hoping to talk a helicopter pilot into wakeboarding me across is all fails so if you know anyone with a heli out back, let me know!

The air must be thin at that altitude, making the wind less powerful, is that the case or are my physics out of whack?

I think it’s 100% possible, the wind is much more unpredictable and yes thinner so less power, but next time I am going to take a surf board and a bigger kite and more supplies so I can wait for that minute where the wind blows my way. There is great fly-fishing up there and you can see the Milky Way at night so not a bad place to hang out, although it’s freezing! 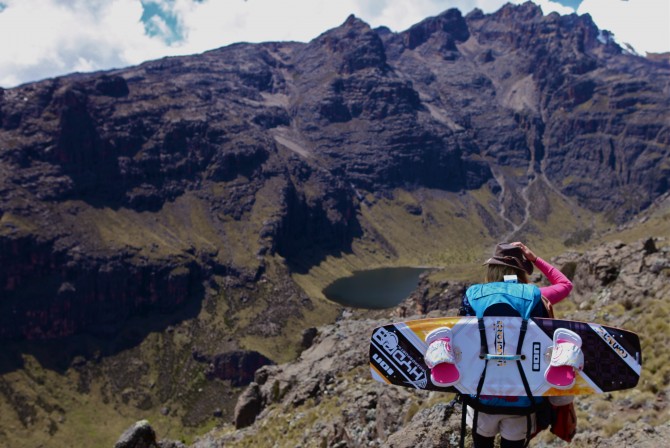 Not many people can lay claim to climbing 4000m to go kitesurfing!

Do you travel to many other countries or is your focus in Africa?

I love Africa but have a curiosity and thirst to experience a lot of other places and cultures. I have lived in Asia, UK and I recently went to the kitesurf event in Maui called MaiTai and totally fell in love with the island, I also met some fantastic kitesurf companions in San Francisco so I am hoping to spend a lot more time over that side of the pond, just depends on what life throws at me, but I’m really excited about the future!!! 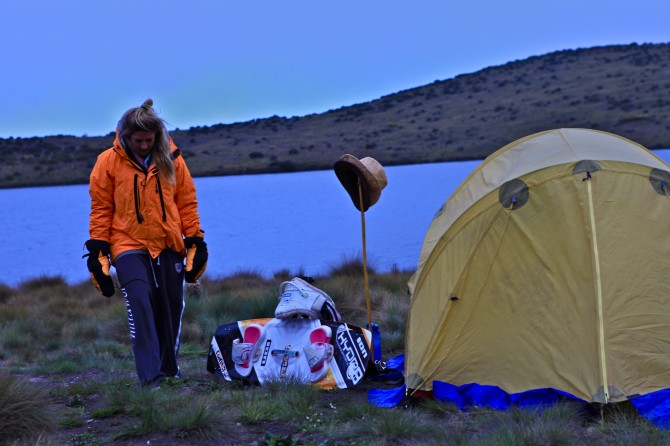 Waiting for the wind!

What’s the one thing you have to take with you everywhere you go?

Well I physically can’t remove my two tribal bracelets from my left arm, so I guess them! They were given to me by the Samburu tribe in Kenya and I am not supposed to take them off until I am married, at which point my husband to be has to cut them off… I don’t know how they have survived my lifestyle, but they have remained on my arm.

What was the strangest thing you’ve had to do?

I still have my scars (pin-stripped skin) from when the Kamaiura tribe scraped our skin off with combs made of pirannah teeth and then dabbed our open cuts with a chilli liquid! Good times! THAT was pain! 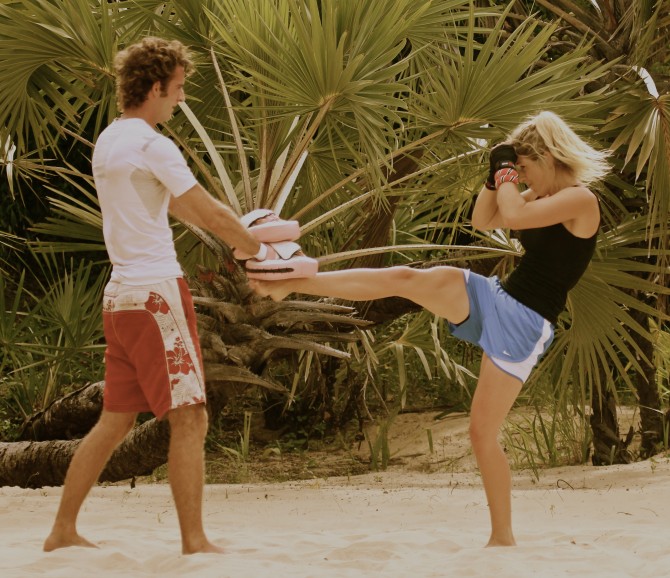 What was the toughest challenge?

How did you get into kitesurfing, did you do any other water sports beforehand?

I began as a windsurfer, I was taught by this fantastic beach boy when I was a kid in Kenya called Anu, he was great and really took me on! I then became an instructor and used to teach on Rutland water when I was 18 to raise money to travel round the world on my gap year. I then got into wakeboarding and became an instructor, I worked in Thailand, Spain, Kenya and UK and then…. Kitesurfing! I needed a sport that would let me go home to Kenya, I live on an island called Lamu and we’ve got no wakeboard boats or cables but plenty of wind so in no time I was hooked, I haven’t really wakeboarded since I really got into kitesurfing there are limitless levels and places you can take it, it’s far more expressive and you don’t need anyone else to do it, it can be such a feeling of escape and freedom sometimes, especially when I kite at home on Kizingoni Beach… feel like no one can get to me. 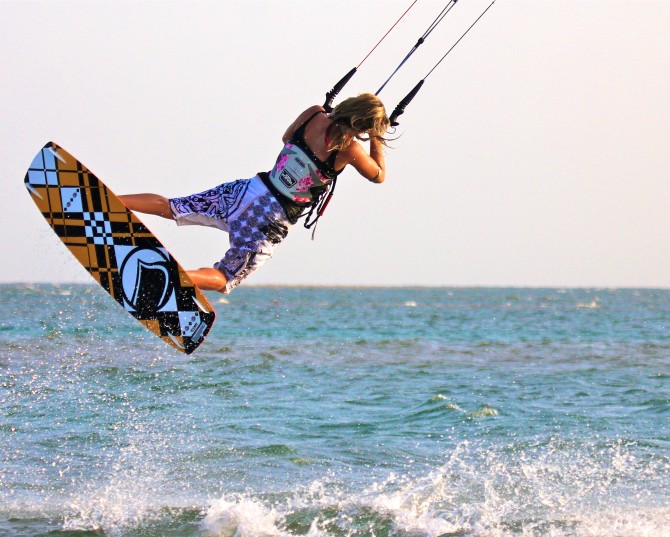 Finding the time to kite!

Where do you see yourself in 5 years time?

I don’t know and don’t want to know or even try to predict… life so far has been such a whirlwind and nothing at all like I could have predicted, all I hope is that I will be happy and with good people and I am excited about what it holds for me!!

What is the relationship with Liquid Force like and do you have any other sponsors?

Liquid force are great, they were really keen on supporting female riders and inspiring more chicks to hit the water in UK, which I love! The guys I deal with are kiters too so that also helps as they give me tones of advice and get what it’s all about! I have another fantastic sponsor, K66 so essentially Nik Baker who is such an fantastic guy to work with and so incredibly supportive of any sport/challenge that his team try and take on, so feel very lucky to be part of his team! 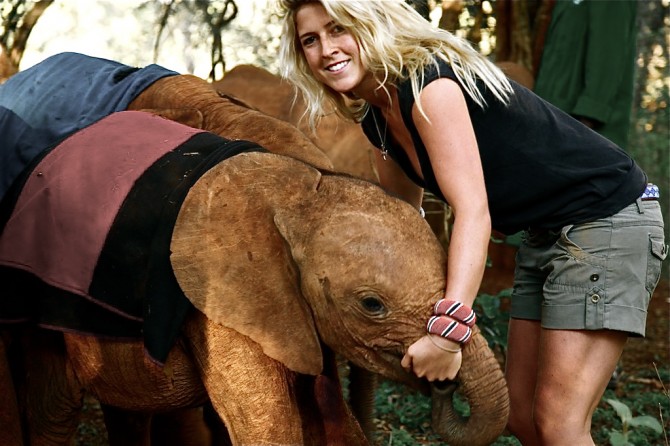 I would like to thank the boys at Liquid Force UK for sponsoring me whilst I have been doing my masters and riding in UK this year. Nik Baker (K66) for his continuous support and of course my incredible parents for putting up with my endless chasing of extreme sports thrills! 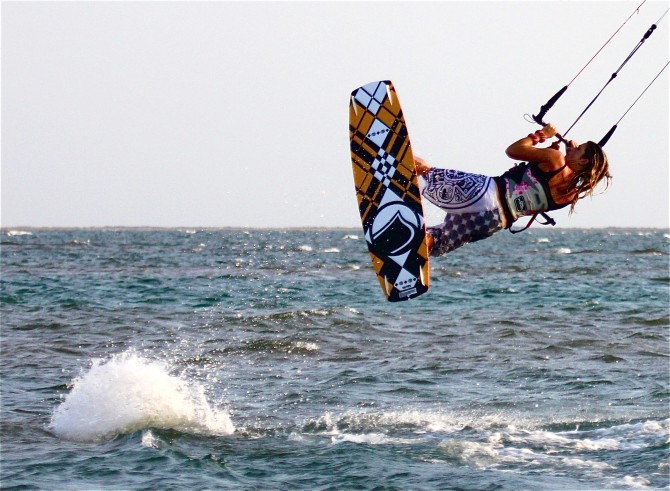 The conditions can be amazing! 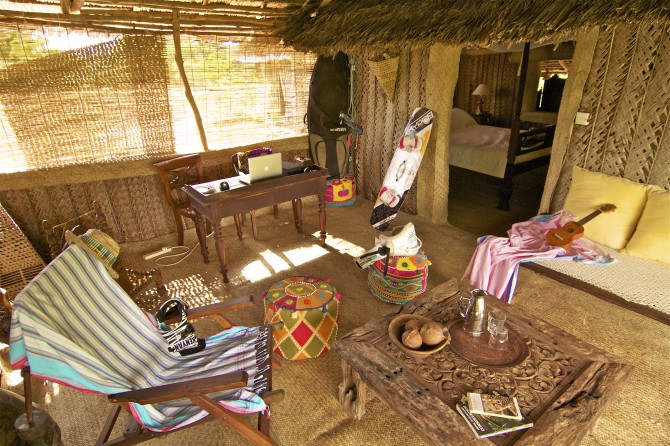 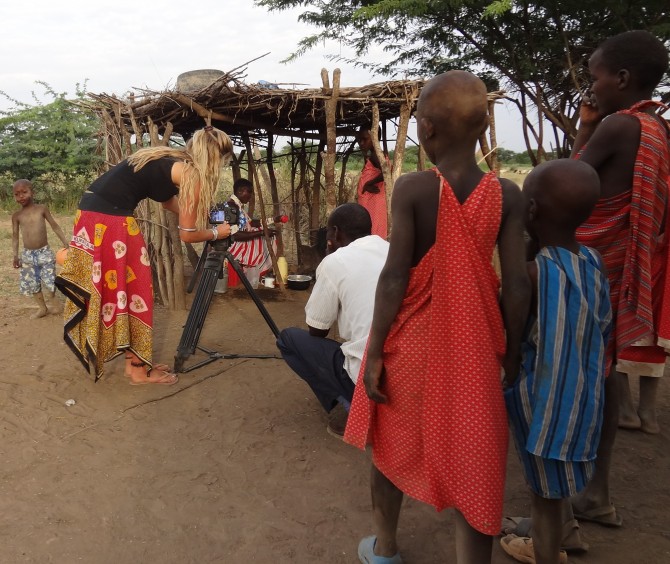 Filming for the TV 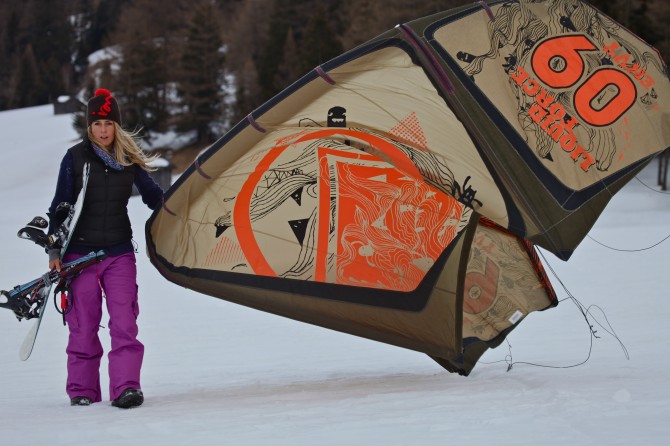 Definitely not in Africa, Anna likes to travel whenever she can!

How do you setup your fins on your kite surfboard? Thruster vs Quad: Kook Academy

World’s First Crane Wakeboarding Park | How Was It Made?