Monaco’s Maxime Nocher leads the Kite Foil Gold Cup after day 3 in Gizzeria, Italy. Racers in each fleet battled it out all day to win a tactical edge going into the final day of competition. Continue reading below for more details about day 3 from Icarus Sailing Media. 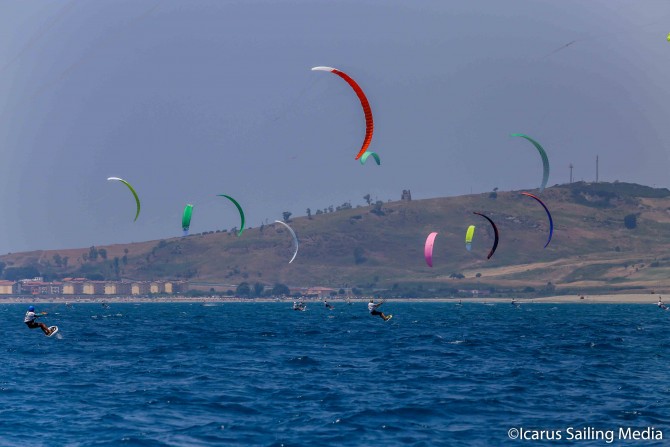 Day 3 at the Kite Foil Gold Cup was a solid day for racing.

Hang Loose Beach, Gizzeriaâ€”The contest for the top spots on day three of the KiteFoil GoldCup saw intriguing tactical battles on the water, with the leading riders trading places in the top fleetâ€™s five races.

But Monacoâ€™s Maxime Nocher emerged on top despite a crash near the windward mark on his last race of the day in the â€śgoldâ€ť fleet that put him down the order and an earlier disqualification â€” reversed on appeal â€” for being over the line early.

The dramas for the young rider masked a near perfect day with four bullets in the stiffening thermal breeze that steadily increased from 9kts to 15kts, forcing race officials to lengthen the windward-leeward track and riders to put up their smaller 11m and 12m foil kites.

Axel Mazella (FRA), riding the same Taaroa Sword2 hydrofoil as Nocher, scored a bullet and a couple of seconds to keep him in close touch on the leaderboard going into the final day of the champion being staged off southern Italyâ€™s Hang Loose Beach, the second of the four-stop kitefoil world tour.

Fellow countryman Julien Kerneur started the day strongly with a trio of consecutive third places, but faltered slightly as the exhilarating competition intensified, the breeze picked up and riders figured how best to use the shifts on the right side of the course near the beach. 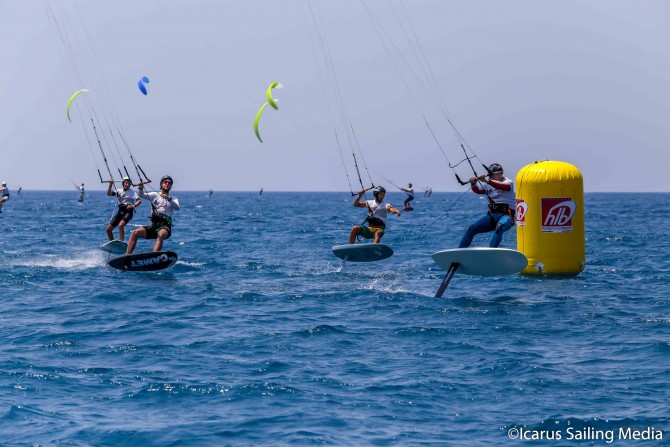 Some of the world’s fastest racers battled for the top position at the Kite Foil Gold Cup.

In the â€śgoldâ€ť fleetâ€™s fourth race of the day, completed in just under 11 minutes even after the course was extended, Nocher both demonstrated his fluency and vulnerability. The young monegasque on his 12m F-one Diablo foil kite was overhauled by Peter Mueller (GER) riding a Flysurfer Sonic FR foil and Levitaz Aspect Bionic hydrofoil on both upwind legs of the two-lap course, only to see handsome leads reversed in the drag race downwind.

â€śI was fast upwind, first to the mark both times,â€ť said Mueller. â€śBut Nocher is quick downwind. I also decided to sit back a little and not go too deep. There was a large gap to third place, so I wanted to protect the second spot and not risk losing many places with a crash.â€ť

Flysurfer-Levitaz team-mate Benni Boelli (GER), who finished the day fourth in the standings, threw down the gauntlet to the other riders in the dayâ€™s first two races, snatching two seconds, but slipped from reckoning a little in the closing duels.

The young Briton Olly Bridge, clawing his way into contention on a borrowed Levitaz hydrofoil after starting the day seeded 11 following the qualifying series, finished the day in seventh spot overall after securing a couple of hard-fought fourths.

Bridge opted to start on a port tack in several races in order to gain the advantage of the lift near the beach on the trackâ€™s right side. The tactic meant he was only able to cross the line after most of the â€śgoldâ€ť fleet had passed on starboard tack.

But it was effective enough that he was able to lead by the upwind mark, though both Mazella and Nocher were able to reassert their advantage with shrewd tactics of their own in the steady breeze under clear skies.

â€śI tacked too late because Maxime Nocher was covering me,â€ť said a slightly disconsolate Bridge. â€śThen Axel Mazella was below me. But the port start was good and I should have won from that position.â€ť

Mazella, 17, riding his Elf Joker kites, concedes he is a little slower on upwind legs than the likes of Kerneur and Boelli on their Flysurfer kites, but knows he will be in his element on the downwind stretches.

â€śI know I have just that bit better speed downwind,â€ť said Mazella. â€śI may not have the [radical] angles of Nocher and Kerneur, but I have the speed.â€ť 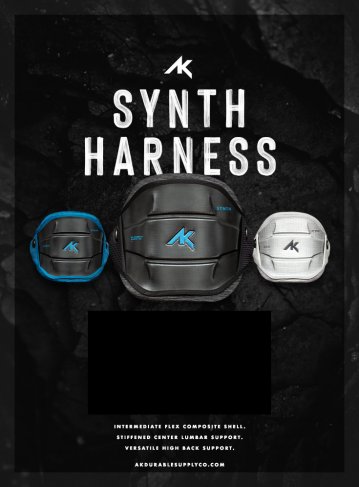 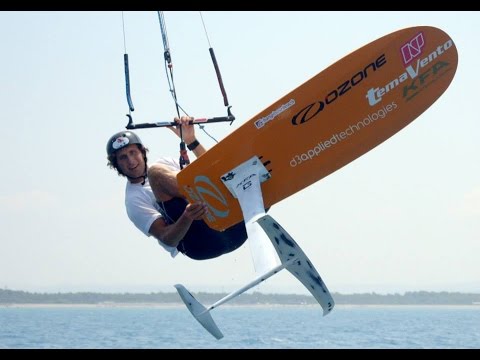 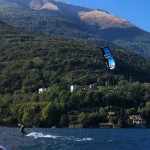 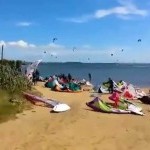 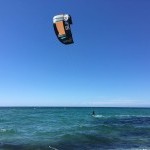 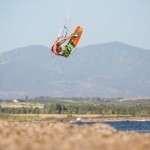 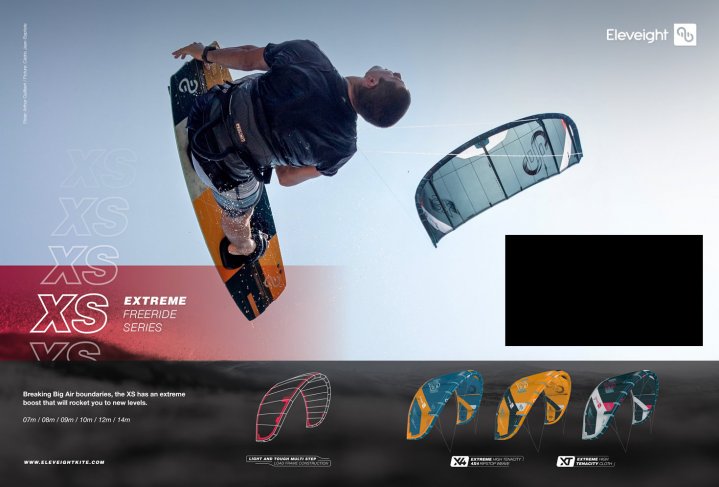 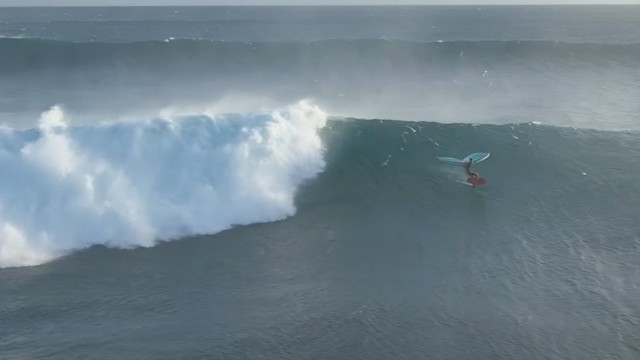 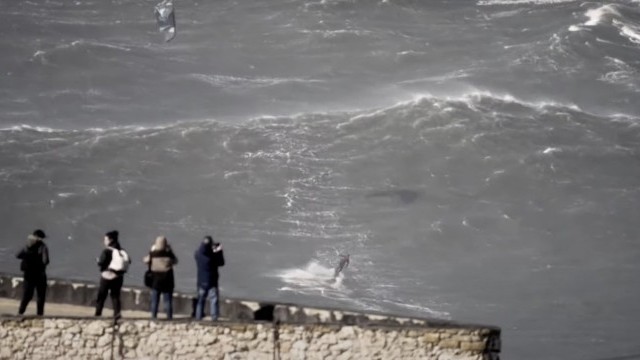 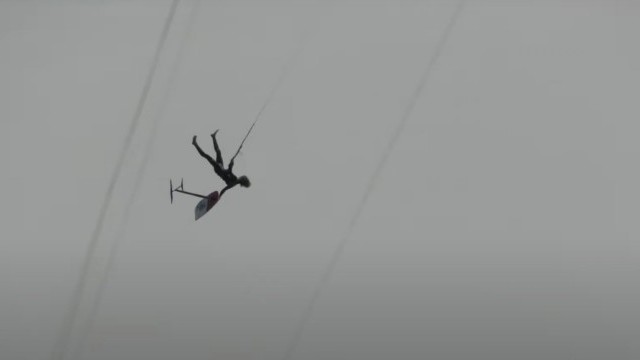 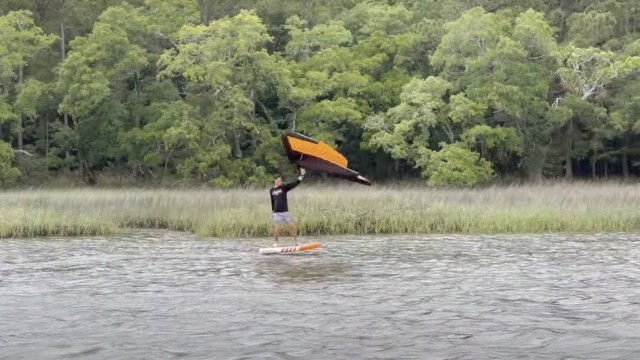 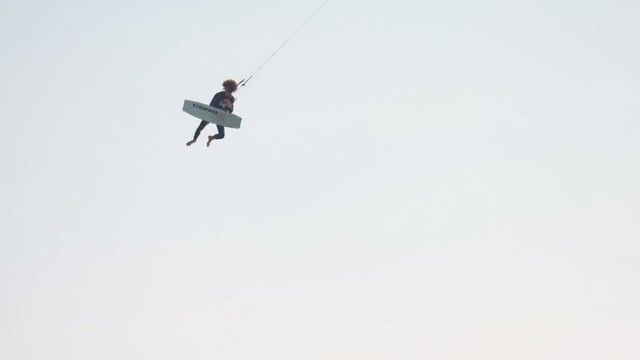 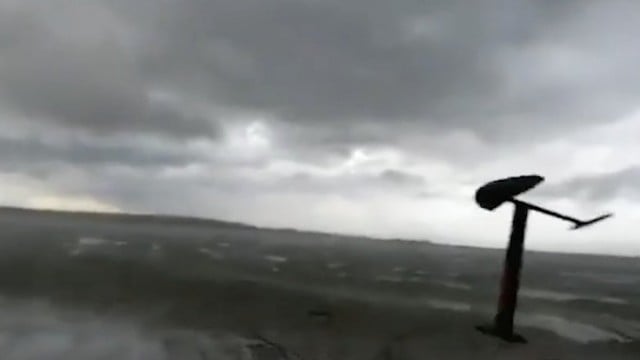 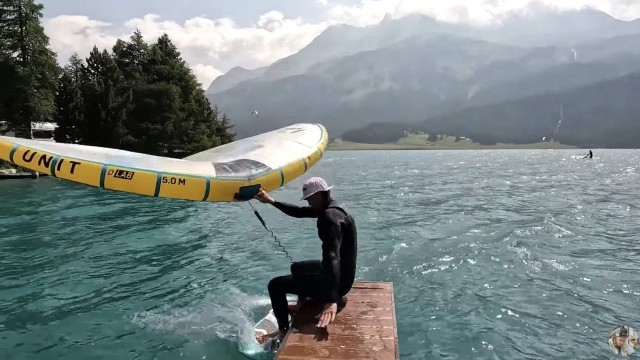 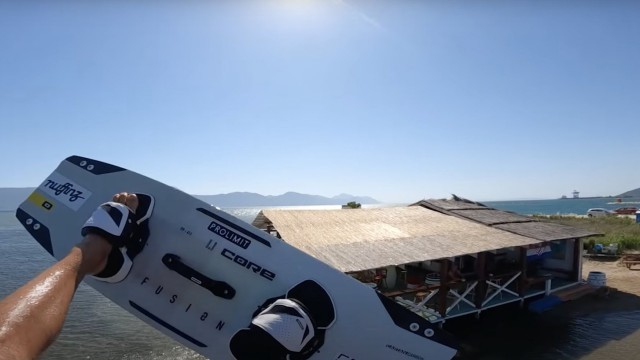 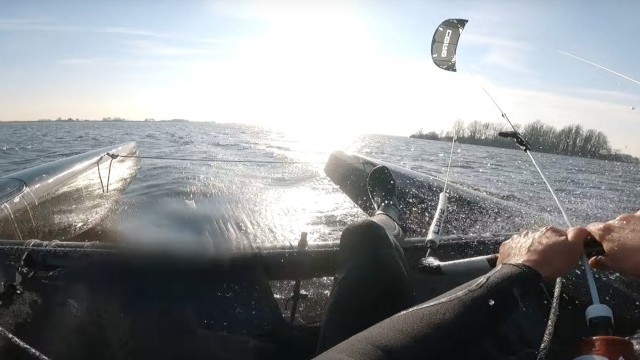 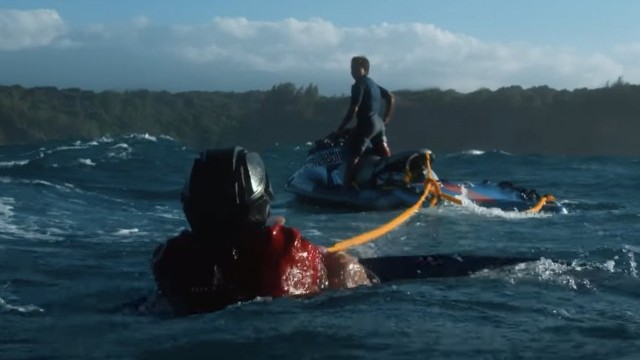 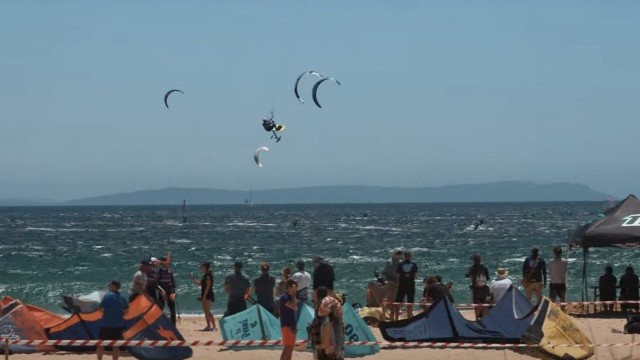 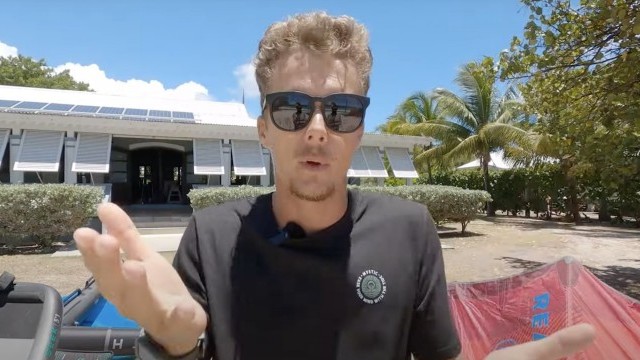 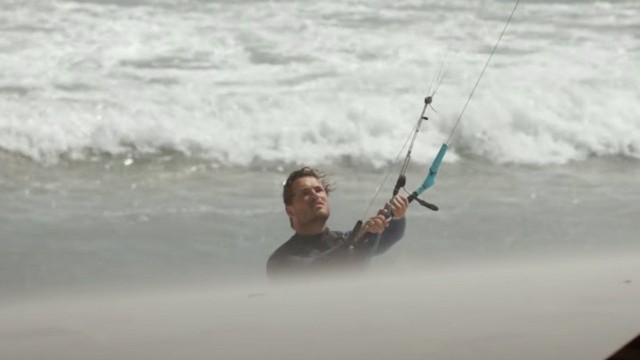 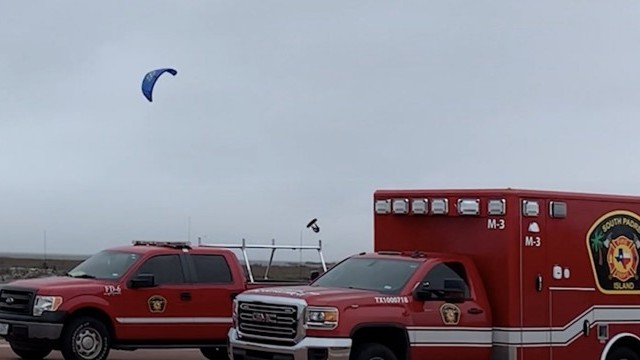 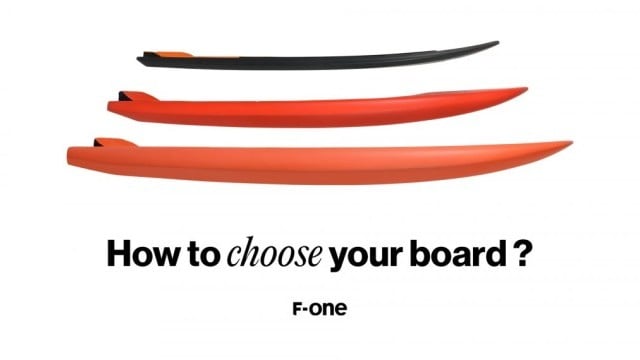 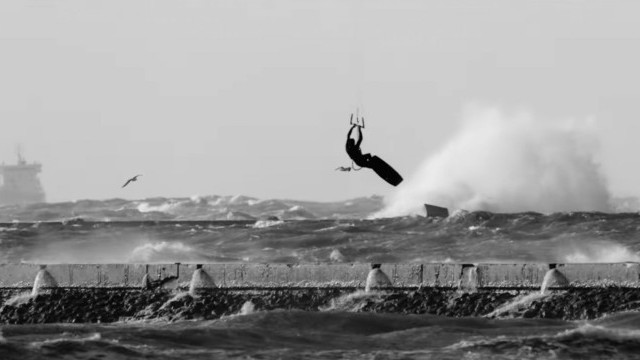 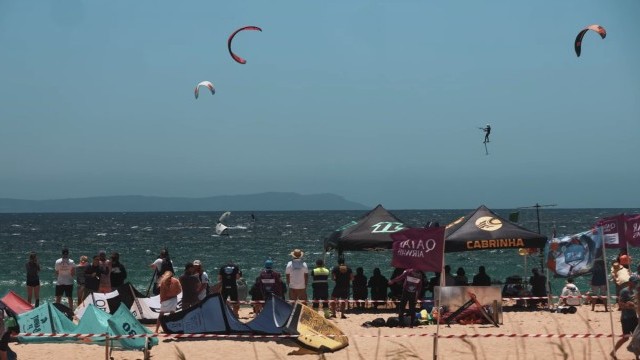 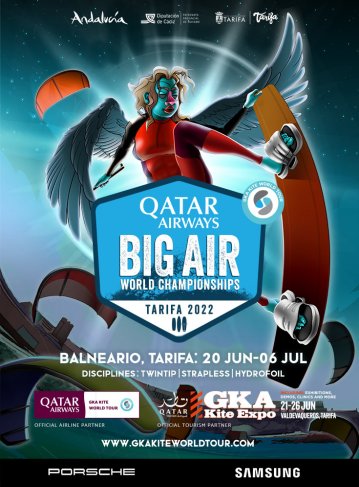 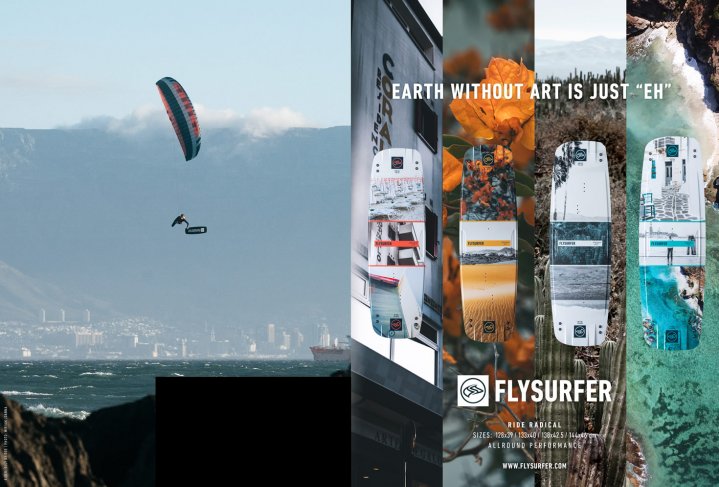