North team riders – Blazej Ozog, Steph Bridge, Narayna & Alice were amongst the 15 riders from around the world chosen to represent their country & the rest of the world of kiteboarders for the format evaluation carried out by ISAF. 5 days of testing different course formats including Slalom, Boarder Cross, Course racing, short track, Enduro & more. The trials were run from the High Performance sailing Centre in Santander (CEAR) & took place alongside other test trials to decide the womans skiff for 2016 & also the Mixed gender mulithull. The team had a huge chance to showcase the sport to its best – given any opportunity to race with the fastest boats, showing the huge strengths : Colour, high speeds, crashes, close cut moves, close to beach media exposure, tactics,beach life, ease of transport of equipment & affordability. 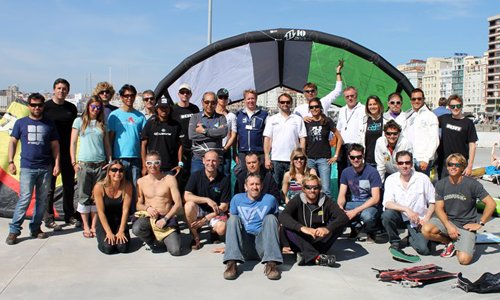 The whole kitesurfing crew at Santander

Within the next couple of weeks the evaluation report will be a positive one – many have just been blown away by the possibilities. In conclusion it was decided that a box style (quatro) course was most suited for big fleets & added the exciting start line -up then coming altogether for the reaches round the course. It was concluded that the upwind does make it more difficult for spectators to follow however the leg length’s would be short to keep the high visual impact.

The ‘short track’style course in line with the Americas’ cup Catamarans would be introduced during the knock out & would end in a 4 person final for the gold medal. This course involves a reach start, upwind & downwind gate with a further reach finish. Again – really easy to follow, can be run very close to the beach & involves skill & tactics also.
These 2 courses will be short 10-12 mins & the size of the course will depend on the wind strength & size of the fleet. They will be introduced now going into the season. Perhaps some of the highlights of the Olympic evaluation included blasting across the bay in 6 knots of wind but travelling at 4 x the speed, Meeting the president of ISAF, introducing the committee members to our sport from a very basic level, out performing all other craft on the water with speed, upwind ability & VMG.

The next big decision will be in May if ISAF decide to include kitesurfing within the ISAF World Cup events. We hope that they will postpone the decision until November for whether kiteboarding and/Or windsurfing can make it into 2016 Rio Olympics. This will allow more time to prove our sport further to the national member bodies around the world.

KTE Holland - Lightwind racing shows what it can do!

GKA Distance Battle - Aluula All-Time Big Air is back in 2021!

THE BEST BIG AIR SESSION OF MY LIFE - 39